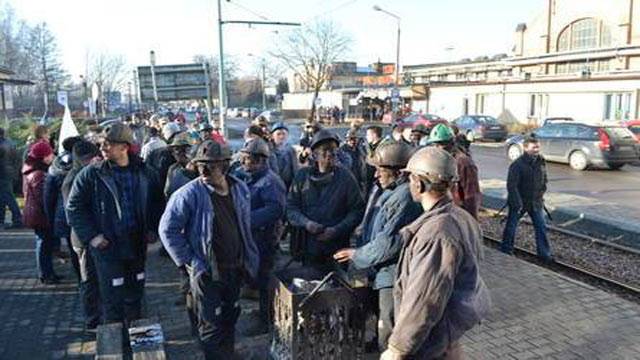 The first two months of 2015 have seen coal miners in Poland, a traditionally well organised and powerful section of the working class in that country, flex their muscles and remind the bourgeoisie of the power of a militant labour movement.

Poland’s Prime Minister, Ewa Kopacz, announced at the beginning of January that four of the fourteen mines owned by the state-run company Kompania Weglowa, the largest coal producer in Europe, would be closed down, another one would be sold off and a new company would be created to run the nine remaining mines.

In total this plan would have cost 5,000 jobs in a sector which has a wide influence on the local economy in the south of Poland. In fact for every job in the mines there are three in the local economy that are linked to and rely on it. Many people feared that Kopacz’s plan would mean the loss of up to 20,000 jobs in the region. In the city of Bytom, which relies heavily on the mining industry in Silesia, unemployment already stands at 21% as a result of the “shock therapy” of the early 1990s. Further increases in this figure would only add to the existing pressures of the workers.

Why attack the miners?

The motivation for Kopacz’s decision to launch this attack on the miners is twofold. On the one hand the Polish ruling class would like its energy sector, which has one of the biggest coal industries in the world employing up to 100,000 workers, to be able to compete with the big energy companies on a global scale.

At the moment however the industry is uncompetitive from a bourgeois point of view. Kompania Weglowa’s mines are particularly weak (the four least profitable ones lost 192 million euros in 2014), particularly compared to their Russian counterparts. This is due to a lack of investment in technology and infrastructure. Rather than invest more capital into the mines, the capitalists would rather sack workers and drive down wages. This in turn pushes down costs which makes the mines competitive, at the expense of workers’ living standards.

The second reason is a political one. 2015 is an important year in Polish politics because there will be both presidential and parliamentary elections. Kopacz has been criticised for having achieved little in her time since taking over as Prime Minister following Donald Tusk’s appointment as President of the European Council in December 2014. Traditionally the Polish miners have been feared by the government because of their militancy. Kopacz saw attacking the miners as a chance to assert her political authority in this crucial election year by cowing a traditionally powerful sector of the working class. Some political commentators were even comparing her to Margaret Thatcher from 1980s Britain.

After Kopacz announced the plans it quickly became clear that she had underestimated the miners. From 7 January over 2,000 miners began strike action. In the Brzeszcze mine workers refused to return overground after their shifts and this example was followed in all of the other fourteen mines run by the company. These underground strikes and occupations were supplemented by overground protests including hunger strikes and the blockading of railways. In Bytom 10,000 people demonstrated against the government’s proposals. The strike also began to spread to other pits controlled by other big mining groups such as Jastrzębska Spółka Węglowa (JSW) and Katowicki Holding Węglowy (KHW).

Under the original proposals those miners who would be sacked had been offered a severance package which was well above the average for workers subjected to this kind of treatment. That alone is an indication that the government was aware of the power of the organised miners. But once the strike got underway the unions began to demonstrate just how strong they were by refusing to negotiate with government officers and instead demanding that Kopacz herself come to the negotiating table - which she duly did.

Kopacz also did not realise the extent of public support for this strike action. According to a poll conducted by the Millward Brown agency for the TVN ‘Fakty’ news programme 68% of people backed the miners, while just 15% supported the government.

According to reports from those involved with the talks, the union leaders were, at one stage, willing to agree to the closures of mines in exchange for other concessions. But such was the strength of the movement that the union leaders were pushed to harden their stance and threatened a general strike on 20 January involving energy sector, railway and other workers who had all pledged their support to the struggle, unless the proposal to close mines was dropped.

Ultimately this forced a retreat by Kopacz, who nevertheless tried to claim victory by saying that the union leaders had accepted the need for reform. It is true that the agreement reached on 17 January after eleven days of strike action will place the four mines originally proposed for closure on a course of action that, if pursued to its logical conclusion, will lead to privatisation and all the attacks on the workers that will bring with it. But clearly the fact that no mines are being closed and no forced redundancies will be made is a significant victory for the miners in Silesia, and the privatisation is now far from guaranteed. It has demonstrated the power of the working class against the bourgeois government, a lesson which will be remembered by the workers ready to be applied and developed next time the bosses try to attack their living standards.

The serious strategists of capital were dismayed at the news that the miners had forced a retreat by the government, with shares in PGE and Tauron, two companies linked to deals to buy up the four mines after they had been closed, falling by 3.3% when the news was announced. The Financial Times complained that:

“Poland has abandoned plans to close down loss making mines in the face of threats from unions. The decision to keep the unprofitable industry going will damage both the credibility of Ewa Kopacz, the prime minister, in a critical election year and hopes of fixing Poland’s mining woes.”

While this situation may be woeful for the bourgeoisie, it can be chalked up as a victory for the working class in Poland.

However, events developed further. Ten days after the end of the Kompania Weglowa strike, on 26 January, Jaroslaw Zagorowski, the CEO of another state-controlled mining company JSW, sacked ten workers in the Budryk coal mine for participating in solidarity strike action two weeks earlier. This was despite the fact that the deputy minister for the Treasury had confirmed at the 17 January talks that no worker who had been on strike would be sanctioned for it.

On top of this the company then moved to terminate three collective agreements and announced a plan to make savings, at which point the union decided to ballot for strike action. Almost 19,000 votes were cast (70% turnout) in the ballot, of which 98% were in favour of strike and protest action. Accordingly, strike action began on 28 January.

Once again this strike action had widespread support and from Monday 2 February solidarity strike action was taken by miners all over the region. One union leader from the KHW coal mine said:

“That’s enough! We’re in contact with the farmers’, fishermen’s and nurses and midwives unions. We need a complex plan for the mining industry. The government is playing with fire and it will see whole country stop”

The strike halted production at JSW costing the company around 30 million zloty ($8 million) per day and shares in the company collapsed by up to 5%. Marcin Gatarz, a financial analyst from Warsaw, highlighted the risk posed to capital by the power of this strike when he said “If the strike takes longer than a few days, the impact on the company’s financials can be material”.

As a result the Polish state threw everything at this strike. A district court in Gliwice declared the strike illegal and ordered unions to halt the protest. There were also serious clashes with police in the city of Jastrzebie on 2 and 9 February where the state forces used tear gas and rubber bullets against unarmed protestors, leaving 20 people with injuries.

The strength of this strike meant that significant concessions could have been won - ArcelorMittal, Europe’s largest coke producer, was forced to hurriedly look for alternative coal supplies within just a few days of the strike taking effect. Such is the key position occupied by the Polish miners. However, on 14 February it was announced that the unions had come to an agreement with the management of JSW and the government to end the strike and for workers to return to work on Monday 16 February.

The deal struck is not an accurate reflection of the balance of forces in this dispute. The CEO of JSW has agreed to resign - this was the sole demand maintained by the unions. But in exchange the unions have agreed to measures that amount to cuts of 280 million zloty ($76.4 million). This will take the form of cuts to miners’ bonuses, and a six-day working week to make up for the shortfall in production caused by the strike.

Although the resignation of the CEO is something of a victory, it does not make a fundamental difference to the miners’ living or working conditions as Zagorowski will simply be replaced by an equally vicious member of the boss class. A six-day working week on the other hand is a major concession to have made which will make a fundamental difference to the lives of the workers.

Given the strength of the strike and the morale boost provided by the earlier strike at Kompania Weglowa, the union leaders could and should have held out for a much better deal. This second strike was a golden opportunity to build on the victory of the first wave of mass action by escalating and broadening the struggle, but the union leaders, afraid of the power they had conjured up, were happy to kowtow to the government and aid them in deescalating the protest movement.

The present strikes are an indication of the mood which is developing below the surface. The strike clearly showed the enormous power of militant workers’ action. This will bring confidence to the working class as it enters a new more turbulent period of struggle. The struggles that we are witnessing today show an embryo of the explosions which are being prepared for the future. As the German economy, which counts for 25 percent of Polish exports, slows down Poland is heading for an economic crisis. This will dramatically increase the pressures on the working class and give rise to an upsurge in class struggle - a situation in which the ideas of socialism will find fertile ground.