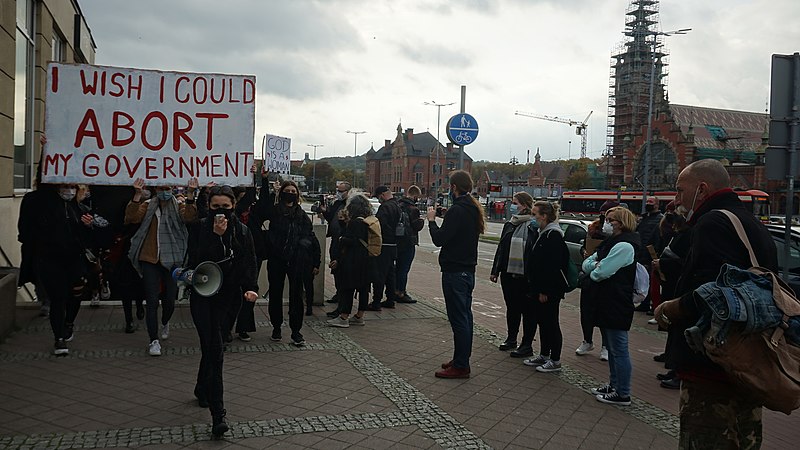 The following statement from our comrades in Poland condemns the Polish judiciary’s ruling to severely limit abortion. The rotten, anti-woman, anti-worker bourgeois regime must be brought down!

Read the original in Polish |

22 October 2020 will go down in history as the day when, after years of attacks on women's rights, the right finally got its way and drastically curtailed the right to abortion in Poland. This time, it was not the legislature or the executive that became a tool in the hands of conservatives, but the judiciary that is so cherished by the opposition.

Those who are to uphold the constitution and interpret it – that is, the judges of the Constitutional Tribunal – turned out to be pure reactionaries. Do we need more emphatic proof that the entire bourgeois system of the Third Polish Republic is anti-woman, anti-worker and anti-human? According to the official interpretation, the cornerstone of this state – that is, its basic law – orders women to give birth against their will. They must bring to the world children marred with terrible deformities and diseases, only to die in agony, causing incurable trauma to their parents.

The entire system is rotten to the core, and absolutely hostile to the working-class majority. It doesn't matter who sits in offices and courts, who works in the prosecutor's office and in the police. Before PiS (the ruling Law and Justice Party) began to enforce its order, countless court rulings devastated the lives of working-class families, by ordering evictions, siding with dishonest entrepreneurs who did not pay their workers’ wages, and silencing journalists and activists trying to publicise cases of capitalist injustice and exploitation.

Instead of defending the courts, we have to fight the system; instead of saving the state institutions of the bourgeoisie from itself, the proletariat must tear down that state and seize power into its own hands.

Some falsely claim that if Rafał Trzaskowski (candidate for Civic Platform) became president, we would not be facing such a problem now. This is to completely ignore the fact that the president has no possibility of influencing the judgments of the Constitutional Tribunal, and the composition of the Tribunal has already been determined by the parliamentary majority.

Liberals, including Trzaskowski, are not allies of women or minorities! What did they do for oppressed social groups when they controlled the state, the parliament and the executive? What did Trzaskowski do for women and LGBT people as Mayor of Warsaw? We answer: absolutely nothing! The working class must rely on its own strength and its own organisations to reach out to its allies – all the oppressed and exploited of capitalist society.

Let us not delude ourselves that the radical right, the Ziobrist MPs (after reactionary Justice Minister Zbigniew Ziobro) and the Confederation Liberty and Independence party, will be satisfied with yesterday's "success". For them, this is only a signal to intensify their attacks and further curtail the rights of working people. The left wing's response must be firm, not limited to the internet and press conferences. The left should organise the righteous indignation of the proletariat and guide it by making radical demands – move from defending the status quo to launching an offensive against the right, and demand free access to abortion, contraception, and sex education. These demands should be included in a revolutionary programme for the destruction of the bourgeois state and the building of socialism.

The theses and demands raised by our organisation in April this year, on the occasion of the previous attempt to limit the right to abortion, remain valid. We raise the slogans:

Only the overthrow of capitalism will guarantee all people their rights!