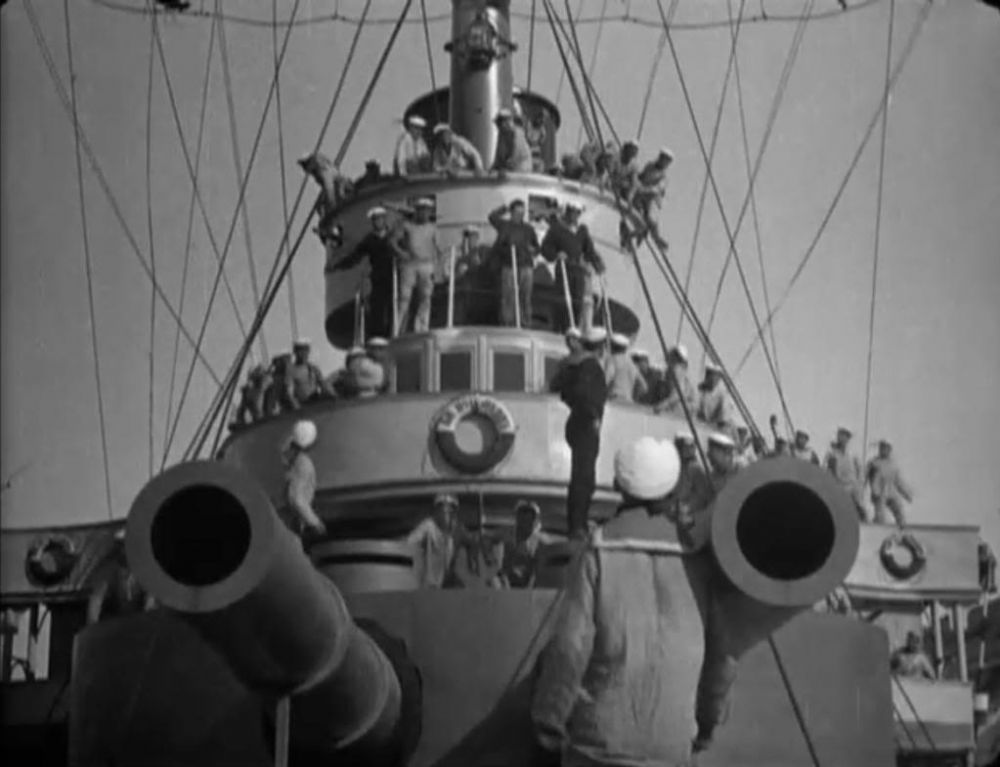 On Sunday evening, September 12, more than 40,000 people gathered in London’s Trafalgar Square. They were not there to oppose the war on Iraq, to defend the rights of pensioners or to demand free education. They were there for the screening of Sergei Eisenstein’s revolutionary film “Battleship Potemkin” on a giant screen, and the live playing of a new score by the Pet Shop Boys and the Dresdner Sinfoniker string orchestra.

Eisenstein’s film, made in 1923, describes the mutiny of the sailors on the Battleship Potemkin, in 1905, which then linked up with the local population in Odessa. The events played a major role in Russia’s 1905 revolution. Eisenstein was a revolutionary above all and he used cinema as a tool for revolution. He once declared: “The Revolution gave me the most precious thing in life – it made an artist out of me. If it had not been for the Revolution I would never have broken the tradition, handed down from father to son, of becoming an engineer. The Revolution introduced me to art, and art, in its own turn, brought me to the Revolution.” 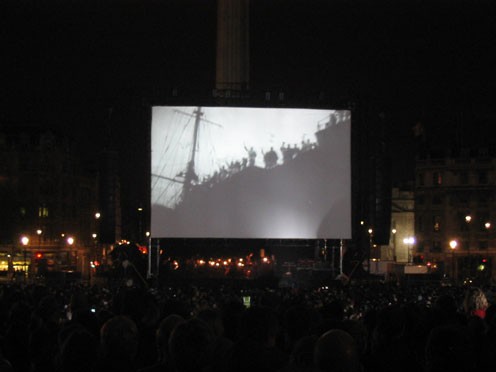 While at the time of the Russian Revolution in 1917 he was not directly involved in any revolutionary organisation, he soon joined the Red Army commanded by Leon Trotsky as a civil engineer. However, his main field of battle was to become that of ideas and agitation. Soon he was involved in organising theatre groups in the Military Construction Units and staging revolutionary plays. He then became involved in the Agit trains which accompanied the Red Army. The fight against counter-revolution was primarily a political struggle and the Bolsheviks used all tools at their disposal: art, propaganda, cinema, music, etc. The train Eisenstein was working on had a collapsible stage in which plays about the revolution would be represented for audiences gathering along the route.

The Russian Revolution gave way to an impressive flourishing of art and culture and Eisenstein was one of the most outstanding representatives of that generation of revolutionary artists which experimented freely with all sorts of new and advanced ideas. Eisenstein for instance devised his “montage” technique, that is, the juxtaposing of two film images to produce a new idea, directly inspired by dialectical materialism, and the law of the interpenetration of opposites. He explained his ideas in an essay called ‘A Dialectic Approach to Film Form’, which starts with a quote from Goethe: ‘In nature we never see anything isolated, but everything in connection with something else which is before it, beside it, under it and over it’.

Eisenstein was part of the Proletkult movement together with many other Russian revolutionary artists like Mayakovsky, Malevich, Tatlin, Meyerhold and others. They advocated the rejection of all previous culture as being “bourgeois” and the creation of a brand new form of proletarian culture. Both Lenin and Trotsky strongly disagreed with this view, as they understood the need to take from the old society all that was good and use in the development of the new. However, they also had the view that artists should be free to express themselves fully. In the early days of the Russian Revolution all were allowed and encouraged to express their views and ideas and from this struggle, constant debate and freedom of expression great works of art were created.

In his early films he abandoned the use of characters and replaced them with the anonymous individuals that make up the mass of people, belonging to different social classes that clash in real life. His first film The Strike, depicting a fictional strike movement was made with ordinary workers instead of professional actors. In his famous October, which describes the 1917 October Revolution, he used the same technique, but had great difficulty finding people who would play the Mensheviks or the Social Revolutionaries, and even more finding anyone who would play the bourgeois! He had to resort to trickery, telling people they would be playing a Bolshevik, allowing them to make fiery revolutionary speeches, and only in the editing process they would become Mensheviks opposed to the taking of power. This was not too difficult considering his were silent movies and the speeches would not be heard.

The Battleship Potemkin was supposed to be part of a project called Towards the Dictatorship of the Proletariat. In the end, however, only Potemkin and October were ever made. In the film he depicts very clearly the building up of tensions between the sailors and the officers, leading up to a point in which an apparently trivial incident, the rotten meat covered in maggots, leads to a sudden explosion and the mutiny of the crew which then raises the red flag. Incidentally, this being a black and white film there was no easy way of showing a red flag flying over the ship, so Eisenstein went to the trouble of painstakingly painting the flag in red in every single frame (something that was not seen in the copy that was shown in Trafalgar Square on Sunday!) The death of one of the leaders of the rebellion during the mutiny in turn leads to the uprising of the people in Odessa itself which are then brutally attacked by the Cossacks in the famous scene of the Odessa steps. Finally tension mounts as the fleet is sent to put down the uprising, when the final conflict is about to take place the sailors in the other ships also rebel.

If the film looks powerful today, this must have been even more so at that time, in the early days of cinema and in a revolutionary epoch. In France the authorities destroyed all copies they could get their hands on. In Germany it was released but subject to censorship since “long-lasting” danger to public order and safety was assumed and military personnel were banned from watching it for fear that they would mutiny. In Pennsylvania, USA, it was banned on the grounds that: ‘it gave American sailors a blueprint as to how to conduct mutiny’. In Britain the film was banned until 1954, when it was only given an “X” certificate. It was not until 1978 that it was given a “Parental Guidance” rating. Even in 1933, in Indonesia, the crew of the Dutch battleship De Zeven Provinciën claimed at their trial to have been inspired to mutiny by Potemkin.

That freedom of experimentation, the search for new forms of art, and the freshness that accompanied it were later replaced by the stale forms of “soviet realism”. The genuine workers’ democracy that existed at the time of Lenin and Trotsky was abolished, drowned in blood and replaced by the monstrous dictatorship of the grey bureaucracy under Stalin. And Eisenstein, like many other revolutionary artists, was to suffer the consequences of this transformation. For instance, Trotsky, who appeared many times in the original version of October, as his role in the Revolution had been at the same level as Lenin’s, was to be cut down to just one appearance, where he is seen arguing for a delay in the date of the insurrection.

More than 3,000 (1000 metres) feet of footage had to be cut on Stalin’s personal instructions. Even the Battleship Potemkin itself was subject to censorship by Stalin. The first version was introduced by a quote from Trotsky: “The spirit of mutiny swept the land. A tremendous, mysterious process was taking place in countless hearts: [...] the individual personality […] became dissolved in the mass, and the mass itself became dissolved in the revolutionary élan […]” (From Trotsky’s 1905). In 1934, after Trotsky had been expelled from the Communist Party, this was replaced by a quote from Lenin (which was also seen in the version screened in Trafalgar Square on Sunday): “Revolution is war. Of all the wars known in history, it is the only lawful, rightful, just, and truly great war...In Russia this war has been declared and won.” (“Revolutionary Days”).

Eisenstein went for a long period to the US and then to Mexico. When he came back to Russia in 1932 he found the political climate had changed completely. Many of his friends and collaborators had been purged and even the 1932 edition of the Soviet Encyclopaedia denounced him as a “petty bourgeois”. Eisenstein had always been openly gay. However, with the general suppression of democracy under Stalin, homosexuals, who previously had won rights through the revolution that they had not had in any other country, were also repressed and attacked. Eisenstein was thus forced to marry his assistant Pera Attasheva in 1934, to avoid repression.

Later on when he directed Ivan the Terrible, Stalin also interfered at every stage of production. Although Eisenstein had apparently capitulated to Stalinism, this was probably just a way of saving his own life, and the film can also be seen as an indictment of Stalin and Stalinism. In fact it was heavily criticised by the Stalinist bureaucracy and not released after the death of Stalin.

The showing of such a powerful revolutionary film as Potemkin in a massive screen in Trafalgar Square is in itself quite a political act, but the presentation to the screening was also extremely political. Simon McBurney of Complicite was in charge of introducing the film, which he did in a very effective way from the roof of Saint Martin-in-the-Fields Church.

He described Trafalgar Square as a place for mass protest and reviewed the most important demonstrations to have taken place in the square (from the most recent “Stop the War” demos, going back to the 1990 massive Anti-Poll Tax demonstrations, the anti-Vietnam war demonstrations, the 1930s National Unemployed Movement marches, etc.) while images of what he was referring to were being shown on the screen. He went on to remind us of the fact that 200 years ago, before the Square was built, the slums of Charing Cross, where poor workers lived, occupied the place. To illustrate the point about their living conditions he quoted from Engels’ classic “The Conditions of the Working Class in England”.

He then explained the meaning of the Potemkin sailors’ mutiny in the context of the 1905 revolution and ended with the famous closing words of the Communist Manifesto: “Let the ruling classes tremble at a communist revolution. The proletarians have nothing to lose but their chains. They have a world to win. Workers of all countries Unite!” 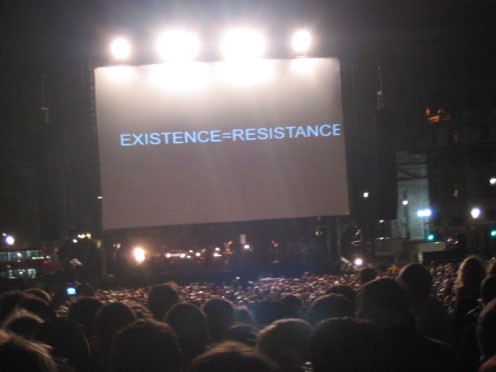 One can argue whether the Pet Shop Boys were the best choice for such a political event and whether their music was up to the previous scores to Potemkin (one of the early pieces of music associated to it was Shostakovitch’s Fifth Symphony). But they were definitely aware of the meaning of the event, and Neil Tennant himself said: “Battleship Potemkin is about a revolution, and Trafalgar Square is one of the arenas for extra-parliamentary political expression. It’s amazing to be given Trafalgar Square for a night.”

In another interview he added: “If you think about the bottom of Nelson’s column, you see Michael Foot giving a speech at a CND demonstration. You see the poll tax riots, which brought down Mrs Thatcher, or Nelson Mandela speaking. The audience will sit with their backs to the National Gallery, so they can see the Houses of Parliament in the distance. We’re staging it like a political meeting.”

At the end of the film the screen showed massive letters announcing “More than 50% of the world’s population live on or below the poverty line” and then “Existence=Resistance”.