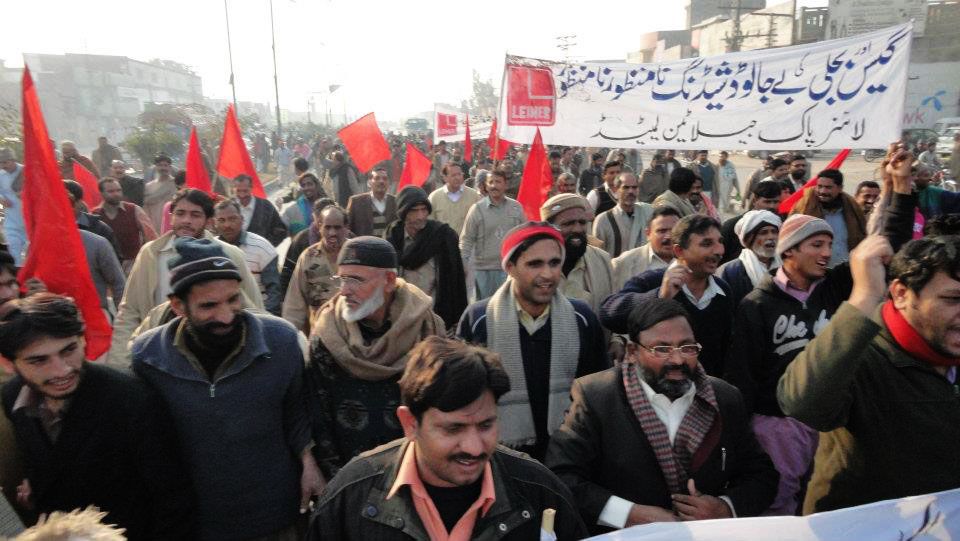 The committee was formed in a meeting of Labour Leaders from industries located on the Lahore Sheikupura Road and in the Kala Shah Kaku industrial Area. The Committee was founded on January 5th 2012 at the union office of the Dawood Hercules Factory. The meeting was attended by the delegates from various factories located at the Lahore Shekhopura Road and in Kala Shah Kaku. According to the decision taken, one thousand posters were published and pasted at the main gates of the factories.

Participants raised slogans like “War will continue as long as there is load shedding of natural gas”, “Down with anti-labour policies”, “Smash down the palaces of the rulers”, “Every human will take his rights now”. The rally converted into a procession when it reached Shahadra Chowk, which is one of the main entrances into Lahore City and the workers blocked the road with a sit-in. While addressing the participants, labour leaders said that their children were going hungry due to the brutal anti-labour policies. All the speakers radically condemned the load shedding of natural gas and electricity. They put forward the demand that the government must end this artificial power crisis for the profits of a few multinationals or else they will be forced to take more radical steps.

Adam Pal from the Pakistan Trade Union Defence Campaign said that the protest was neither the first, nor would it be the last. He said it was the beginning of something bigger and the ruling class must consider it a threat. If the demands of the workers are not met we will start a countrywide campaign of protests and will take our rights. He criticized the pro-capitalist and imperialist policies of the government and said that capitalism cannot solve the fundamental problems faced by the working class and youth. The need of the hour is to overthrow this rotten capitalist system and replace it with the “dictatorship of the proletariat”. All the labour leaders said that they were determined to continue this struggle on a collective basis. After two hours of the road block the procession ended peacefully.

It was announced that future plans of action would be chalked out in the meeting of the Mazdoor Action Committee and this movement will continue till all the demands of the workers are met.