Pakistan
Share
Tweet
Pakistan's infrastructure is in a state of collapse. Instead of things getting better, they are getting worse. Power cuts are severely affecting the livelihood of many workers. In Multan this has erupted in militant action which has been met by police opening fire on unarmed workers.

Pakistan has been plagued by shortages and a crisis of basic necessities of life for a long time, but the situation exploded on the eve of the last elections while General Musharraf and his team were blowing the trumpet about "unprecedented economic development". After eight years of ruthless capitalist policies, which were implemented by the IMF's puppet prime minister Shaukat Aziz, the already fragile basic economic structure went into a state of general collapse.

Suddenly there was no wheat flour [which is the staple diet in Pakistan]. People were on the streets demonstrating for bread. This was happening in the Punjab which was once regarded as the food basket of undivided India. On top of this there was no electricity. For the last three months Pakistan has been paralysed by severe power shortages. There is no electricity. WAPDA [The national electricity company] is carrying out "load-shedding" of 10 to 20 hours per day.

When there is no electricity for 18 hours in 24 hours one can understand what this means for workers who get their wages on a daily basis. No industry is working. The worse affected are people who work in small scale "cottage industries". One such cottage industry is in the Power Loom sector which produces cloth at household level using electrical motors. For the last few months the life of these workers has been destroyed due to power shortages. Many of them have lost their entire livelihood due to lack of work.

The Power Loom Association is a trade union of these small "owner-workers". They have been protesting throughout Pakistan over the last few months urging WAPDA to give them a schedule of power cuts. Due to numerous hunger strikes and demonstrations WAPDA in Multan, which is the home town of new Prime minister Gillani, offered a deal to the workers which assured them that electricity would be provided to them for at least 12 hours and there would be no unannounced power cuts.

But instead of honouring the agreement, they increased the load-shedding to 20 hours. Today, April 15, the unions announced a siege of MEPCO [the Multan office of WAPDA] unless the electricity company honours the agreement. Hundreds of workers surrounded the offices of the electricity company but the authorities refused to listen to the workers. This sparked off a wave of anger in the crowd and the workers started destroying the cars and properties of the bosses. A bank was burned as well as parts of MEPCO head office.

The arrogant authorities instead of listening to the genuine grievances of the workers, most of whom literally have no bread in their kitchen, started firing on the unarmed workers. This further angered the workers who took over the premises, virtually paralysing life in the city, blocking the roads and demanding their right to earn a decent living.

The whole episode was shown live all across Pakistan through the media channels. The government and others intellectuals of the media immediately started describing the workers as "miscreants" and "lawless criminals". The police and the authorities arrested more than 50 workers and charged all the central leadership of the Power Loom Association under the "Anti Terrorism Laws". It is ironic that the bosses consider agitation for bread and electricity as "terrorism" while the Islamic Fascists are brought in as "coalition partners" as part of the Gillani government in Islamabad. 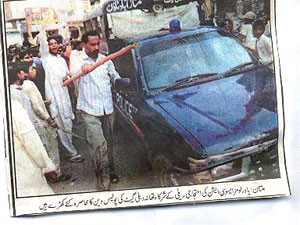 The comrades of our tendency have a strong presence in the Power Loom sector. The PTDUC is in the forefront of the movement of the Power Loom workers. The movement of this group of workers is no longer under the control of the state. The capitalist system has brought Pakistan on the verge of famine and now workers are on the streets demanding that the People's Party led government deliver its promises to the poor masses.

Today in Multan they have demonstrated their power and their militant mood and have warned the Prime minister that the workers will not accept empty slogans. This system has no life left in it if it cannot give bread and electric power to the people. Such was the outrage that the Prime Minister was forced to announce the sacking of the MEPCO chief but this is too little too late. The police have not released the workers and the crackdown continues.

The PTUDC had held a successful labour conference last year in Multan and their Joint Action Committee (JAC) was formed in which representatives from all trade unions, including the Power Looms Association, were present.

Now the PTDUC and JAC has contacted the local trade unions throughout Pakistan and Multan to express solidarity to the masses. We appeal to workers of the world to raise solidarity activity for the release of all the imprisoned workers in Multan.

The masses are learning lessons from life and they are learning the most precious lesson of all: that there is no solution at all under capitalism and a worker led revolution is the only way out of all this misery.


See the following links for a report of the Labour Conference held in Multan last year:
See also: