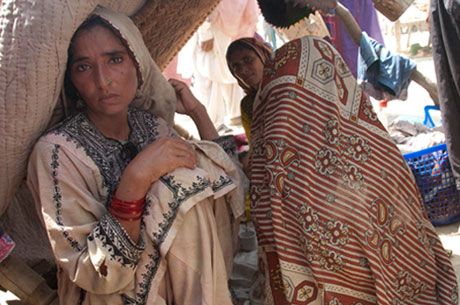 Along with the other miseries of the system and society, the curse of the oppression of women not only continues unabated but has worsened with the aggravation of the socio-economic crisis. It is rather ironic that around International Women’s Day, the incidents of violence against women, honour killings and other brutalities like acid-throwing and rape have intensified.

And yet, there is no revolt on a large scale against these atrocities. The Mullahs and the conservative politicians blatantly supporting these obscurantist attitudes even give tacit support to the perpetrators of these heinous crimes. The several crusades by the liberal politicians and social activists have been mainly futile and superficial. Even the draconian laws against women imposed by the brutal Zia dictatorship have not been repealed by the ‘democratic’ parliaments 24 years after his demise.

The patriarchal mindset and male chauvinism dominates the social and cultural tendencies prevailing in present day society. Every law passed to curb violence and discrimination against women is a welcome step. But despite several laws, there has been very little improvement in the plight of women and hardly anything changes for the better for the vast majority that belong to the oppressed classes.

These working class women are doubly or triply oppressed. They are subjected to chauvinist attitudes and sexual harassment at work, in society, and in the family. Hence limiting the oppression of women to the gender question is neither a solution to their woes nor can a real strategy for their emancipation be developed without understanding the social and economic root causes of this exploitation on the basis of gender. This brings us to the interrelationship of the questions of class and gender in the struggle for liberation.

In today’s Pakistan there are an increasing number of women rising to fame and power in politics, business, the arts and other sectors of society. But almost all these women are from the ruling or the middle classes. Their problems, woes and aims are in total contradistinction to those of the toiling women. If any woman from the lower classes rises in this socio-economic milieu, she swiftly becomes part of the upper classes and betrays her class origins. After all, it is the material and social conditions that determine consciousness, not vice versa.

The main problem with the liberal mindset is that they cannot get rid of the notion of woman as a commodity and a source of exhibitionist advertisement. If the religious mindset forces women into seclusion and enslaves them as their property, the elites use women as tools to enhance their businesses and profits. If the obscurantist repression of women is bestial, then to bare women’s bodies to sell products for profits is not their salvation.

The attitudes of discrimination against women stem from the social relations created by an economy of greed and lust. Hence these attitudes run deep down to the social psychology determined by the system and society they are nurtured in. Without the abolition of these material conditions upon which this socio-economic setup is based, these attitudes will never go away.

Under capitalism the domestic and many other forms of labour carried out by women are taken for granted. The maintaining of the household, nourishing and bringing up children and other similar tasks assigned by a contemporary system are labour without pay, hence playing an important role in the undermining of the role of women and their economic status. In other words this is the result of running a system based on profit, the rate of which rises mainly by reducing labour costs.

Lenin wrote in Pravda, issue 102: “Present day society conceals within itself numerous cases of poverty and oppression which do not immediately strike the eye. At the best of times, the scattered families of poor town people, artisans, workers, employees and petty officials live in incredible difficulties, barely managing to make both ends meet. Millions upon millions of women in such families live (or, rather exist) as ‘domestic slaves’, striving to feed and clothe their families on pennies at the cost of desperate daily effort and ‘saving’ on everything — except their own labour. It is these women that the capitalists most willingly employ as home workers, who are prepared for a monstrously low wage to ‘earn a little extra’ for themselves and their family, for the sake of a crust of bread.”

In today’s society most well to do women’s daily lives revolve around discussions of domestic servants, fashion and matrimony arrangements. All this is based on comparative levels of wealth, social status, job or business. These are also the main themes of the soap operas and serials that inject the servile condition of women into society. This servitude is further dictated by the mullahs and is often linked with the so-called ‘good’ character of a woman. All this is to reinforce their role as dictated by the needs of this exploitative system.

The needs and topics of housemaids and the toiling women are, however, totally different. The domestic slavery to which they are chained can only be obliterated when the means of labour are transformed. In this economically backward society, a woman’s emancipation begins when she gets the privilege of running tap water rather than using buckets of water carted laboriously for domestic consumption. With advancement of technology, domestic labour can be totally transformed from drudgery. From social kitchens to the attainment of kindergartens, huge steps can be taken for them to become equal citizens. Most domestic violence is related to economic issues; hence in a society of dearth and desperate want, it will never be eliminated. Similarly, the women workers in factories and other institutions earn lower wages than men even in the advanced capitalist countries.

From wage slavery to prostitution, the basic curse for women is a class system in which they are super-exploited for the few leeches at the top to suck more blood. The ethics and morality imposed upon society to perpetuate this exploitation of toiling women is by design, and they meet needs of the system. Patriarchy is also a product of this exploitative system.

To end this system, the only way out is the class struggle where the working men and women have to unite to overthrow it. Any tendency that breaks this class unity, whether it is feminism, nationalism, religion or any other prejudice becomes reactionary and retrogressive.