Details
our correspondent in Islamabad
17 March 2014 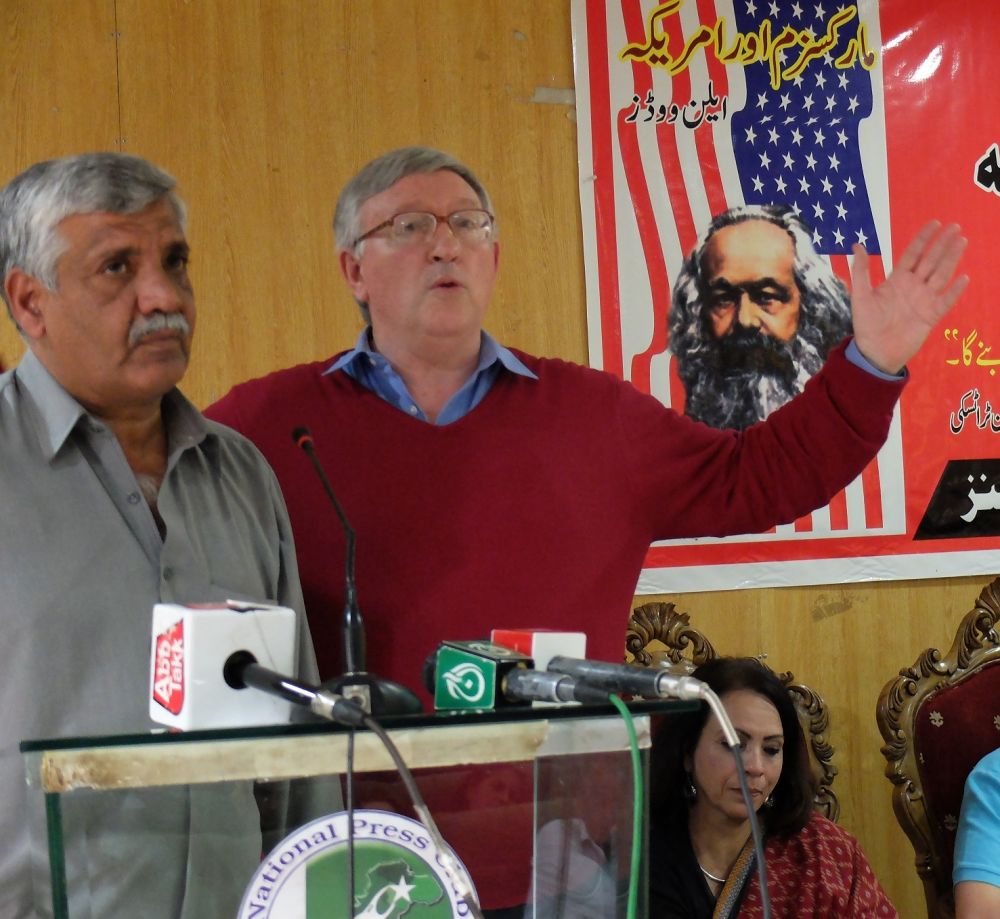 On Saturday, March 15, 2014, the Urdu edition of Marxism and the USA was presented at the National Press Club in Islamabad. The book, written by Alan Woods, was originally published in the United States. The public launch of the book, with the presence of the author, was a highly anticipated event. Comrades and media travelled from across Pakistan to hear Alan Woods present his latest book in Urdu. 300 people packed the hall until there was standing room only, and three television channels covered the event. Special mention must be made of the participation of dozens of hospital workers and nurses who are currently on strike, and who have been subjected to brutal attacks by the police. This has resulted in several nurses being sent to hospital.

The presentation was presided over by Zafar Ullah of The Struggle. The first speaker was Dr. Lal Khan, a leading member of The Struggle and the IMT. He explained that the many misconceptions about the reality in America had nothing to do with the truth. He made a brilliant exposition on the rise and fall of various imperial powers in the past - from Rome to Britain - and showed how the USA is following in the footsteps of its predecessors, with deep internal contradictions that will eventually and inevitably lead to US imperialism's fall as the world's supreme power. 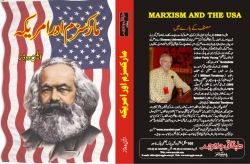 Cover of Urdu edition of Marxism in the USAHe highlighted the power of the US working class and the role it played, for example, in ending the Vietnam War and in sparking the worldwide Occupy movement. Dr. Lal Khan is very well-known in Pakistan, and his deep knowledge and interest in American history is sure to spark the interest of thousands of young Marxists in the subcontinent. 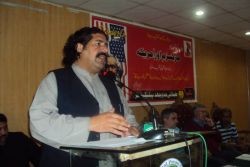 Comrade Ali WazirThe next speaker was Ali Wazir, who travelled all the way from South Waziristan to participate in the book launch, enduring terrible roads and a dozen army checkpoints in order to arrive at the capital. He gave an accurate reflection of the reality of the situation in Pakistan's tribal areas, where the Pashtoon people have a long and proud tradition of struggling against imperialism. He dispelled the common misconception that everyone in these areas is a Taleban supporter and fundamentalist, using his recent election campaign as an example. Running openly on the revolutionary socialist program of The Struggle and the IMT, tens of thousands came to his rallies and cast their votes for him. 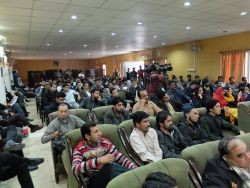 This is proof that socialist ideas such as the need for universal jobs, health care, food, housing, and education get an echo among working and poor people worldwide. In the end, Ali Wazir lost the election by just 200 or so votes, in a re-vote marred by fraud and called by the ruling class after the initial vote show Ali as the victor. The comrades in this remote and dangerous part of Pakistan stand in solidarity with the workers of the entire world including the US working class, and are daily facing the wrath of drone attacks, the fundamentalists, and the Pakistani military and ISI. Only class unity across all national, ethnic, religious, and other lines can ensure the victory of the working class. 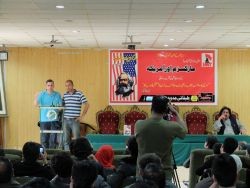 Comrade John PetersonThe next speaker was John Peterson, from the US section of the IMT, who wrote the introduction to the Urdu edition. In a fascinating speech, John outlined some highlights from US history which underline Alan Woods' fundamental thesis in Marxism and the USA: that like any other country dominated by capitalist relations, the class struggle is alive and well in the US. You cannot have an exploiting capitalist class without an exploited working class. From the American Revolution, in which the US colonists defeated the mightiest imperialist power in the world, to the Second American Revolution - the US Civil War - there are many inspiring examples from US history. 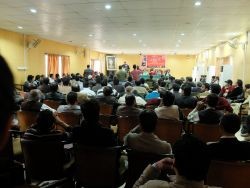 Several hundred people listened eagerlyComrade John also gave some harrowing facts and figures about today's unemployment, poverty, homelessness, and the deep crisis of US capitalism, which shocked many in the audience. He urged the audience to read Alan's book, as it is an excellent overview introduction to the rich and revolutionary history of the US working class, and an indispensable tool to arm a new generation of Marxist fighters in all countries. The best days of the US labor movement are yet to come, and we will see an upsurge in class struggle in the US in the years ahead. 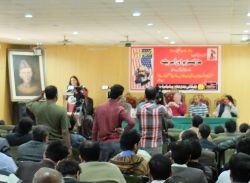 Comrade Farzana BariThe next speaker was Farzana Bari, a long-standing supporter of the IMT, and one of Pakistan's most well-known leftists and advocates for the rights of women. She told the audience that it was her pleasure to participate in this meeting, and she stated that she had thoroughly enjoyed reading Alan's book in the US edition. She highlighted the role of women in the most important labor struggles in the US, including the Triangle Shirtwaist Fire in 1904. She explained that while class is the most important factor when developing our strategies and tactics, revolutionary Marxists must also pay special attention to the plight of women, who are especially oppressed in a country such as Pakistan. 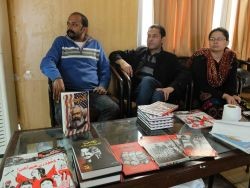 Book stallTo highlight this situation, one example suffices. Just days before the book launch, a young female student was viciously raped in front of her brother. After the police let her attackers go (after being bribed), and kicked her out of the police station, she doused herself in petrol and set herself on fire. Nonetheless, it is women who are at the forefront of the ongoing struggle of the nurses' union against the government. 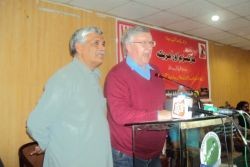 Comrade Alan Woods speaking, Comrade Lal Khan translatingFinally, Alan Woods presented the new edition of his book. Alan is well-known in Pakistan and has presented several of his books here before. The audience waited in anticipation to hear more about this important topic. Alan greeted the audience in Urdu, to the delight of the crowd. As he recounted more details about key aspects of US history, the faces of those in the audience lit up and many were nodding their heads and recording videos on their phones. Alan explained the bitter struggle of the US colonists against British imperialism, and noted that only dialectics can explain how this once weak colony was transformed into the world's most powerful imperialist country. But he quoted the Christian Bible, saying that "the first shall be last and the last shall be first", to explain how the current situation will also turn into its opposite. 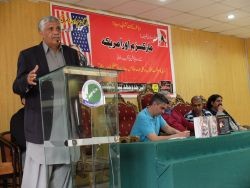 He spent extra time showing the true revolutionary nature of the US Civil War and the way it was conducted by Abraham Lincoln, resulting in one of the greatest expropriations in world history when the slaves were freed. He also thrilled the audience with tales of the Industrial Workers of the World (IWW) and the sit-down strikes in the auto industry in the 1930s. He ended with the slogan of the IWW, which fought for "one big union", and explained that only through class unity in the struggle for socialism can this become a reality.

The enthusiasm of the audience for the presentation was indicated by a rousing singing of The Internationale at the end of Alan's presentation.  Over 2,000 copies of the book's first print run are on sale throughout Pakistan and hundreds have been sold already.