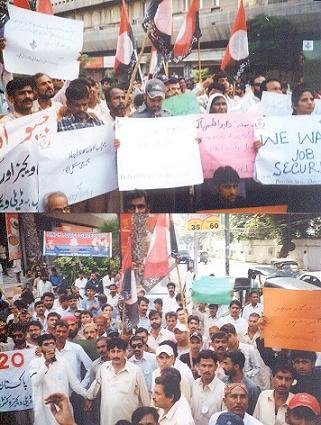 Workers at the Steel Mills in Karachi have taken up the struggle once again for decent wages and proper contracts for the daily wage workers. In spite of attempts to stifle their struggle, the workers are determined to achieve their demands.

Pakistan Steel is the biggest industrial steel company in Pakistan which plays a vital role in the country’s economy. The rulers are trying to hijack this worker’s institution but workers are fighting back in a violent way. A large number of workers have been working in the Steel Mill on daily wages and on contract for the last 20 years. These workers are working in brutal conditions on meagre wages, especially in the department where iron is being melted and the temperature is around 1700 degrees centigrade. It seems like the blood of the workers is being dried-up while working in these conditions. These workers are also working in other departments where labour is even more at risk of health. These daily wage employees have to perform tough duties like welding, fitting, gas cutting, machining, etc. The former Chairman of the Steel Mill once admitted that workers on daily wages and contract contribute up to 70% of production. Despite all this hard work these workers are deprived of all the basic necessities of life. They are even not getting the minimum wage, i.e. Rs. 6000, as proposed by the Prime Minister while addressing the assembly and for the first time had promised to regularize all the daily wages and contract workers. The Prime Minister, further, has made several promises to regularize the contract workers up to December, 2008. In the People’s Workers’ Union, CBA at the Steel Mills, meeting on May 4th 2009 another attempt was made to deceive the workers, but the workers answered with a powerful reaction. Union, however, took the workers into confidence that they will be regularized up to June 23rd 2009 but all these promises were not fulfilled and the CBA union at the Steel Mill is not fulfilling the workers’ demands.

About 1000 workers held a procession on October 17th 2009 in front of the Karachi Press Club. PTUDC members were standing by the workers on this occasion. A press conference was also arranged after the procession. The CBA union leadership, on the dictates of the Administration of the Steel Mill tried a lot to stop this procession but the workers were determined. The CBA union, desperately, arranged a picnic trip to ‘Thatha’ for press reporters. Six vehicles belonging to the mill and hundreds of thousands of rupees were spent on this trip so that the workers’ protest would not become a part of news. But the workers didn’t give up and continued their protest. In the second phase another procession was held at ‘Gadhi Khuda Bakhsh’ on October 25th 2009. Abdul Ghafar Baghio, Comrade Zahoor Mamon, Shahid Basheer and Zubair Bhatti, all from the Daily Wages and Contract Workers’ Union were leading the procession. The leaders clearly announced that they would not let the management deceive the workers once again and if their demands are not fulfilled they would shut the Steel Mill down in the next phase of protest.