As the misery in the flood affected areas continues, so do the efforts of the PTUDC. In the present situation where the water has started to recede, the problems of people at large have started to increase with unprecedented levels of hunger, inflation, disease and unemployment. 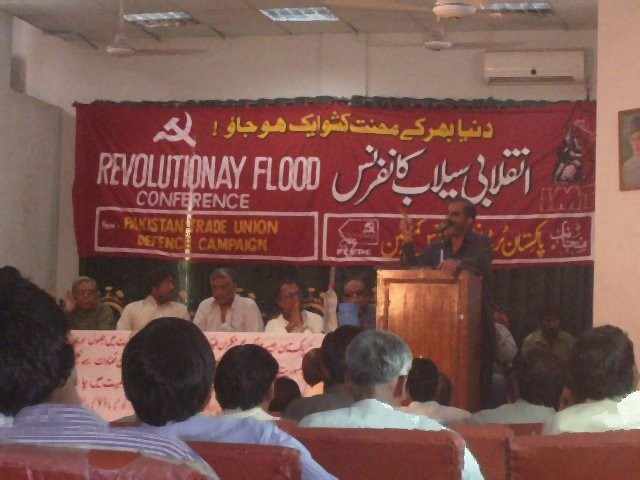 In these turbulent times, where the state machinery ceased to function, our comrades stood firm through the rushing waters of the river Indus and its tributaries. Our comrades sensed the danger and organised a nationwide Revolutionary Flood Relief and Protest Campaign. The relief efforts and protests continued side by side. Relief camps were set up in 57 cities across the country.

As a part of the ongoing campaign a Revolutionary Flood Conference was organised in Multan at the local Press Club on September 29. Political activists, workers from various departments and industries and comrades of the PTUDC participated in the conference, from all over South Punjab. Lal Khan was the chief guest while Haider Abbas Gardezi, member of the Federal Council of the PPP presided over the conference. Other guests included Malik Altaf Khokhar, Riaz Hussain Baloch, president of the PTUDC, Jam Sajjad from PTCL, Dr. Salah ud din Haider and Moosa Saeed. Workers from the Railways, PTCL, PIA, Sui Gas, and the textile industry participated in big numbers along with students from various colleges and the BZ University in Multan. Students and workers from Bahawalpur and Khanewal also participated including workers from Unilever and Nestle in Khanewal.

Dr Ahmad Arsalan, from Multan, opened the proceedings and shared his experiences of relief efforts, which his team has been doing in the surroundings of Multan. He also criticised the criminal acts of the state which left poor people in the lurch. Comrade Kajal from Rahim Yar Khan said that the condition of poor people in Pakistan was no better before the floods, but these have made their life even worse. Dr. Harish from Hyderabad told about his team's efforts in Sindh. He also told about the people's anger against their MPs. Mr. Shafiq from PTCL also shared his views about the recent movement in the department and exposed the role played by the state against the workers fighting for their rights. Mian Fakhar ud din Peerzada from People’s Unity CBA (PIA) also expressed his views in front of the audience. He criticised the PPP's current leadership and condemned their policies and urged them to follow the PPP manifesto of 1968. He admired Z.A. Bhutto for his reforms which he made during his regime. Comrade Riaz Hussain Bloch said that the present government of the PPP has failed to deliver. Senators and members of parliament seemed to be keener on their photo sessions rather than concentrating on relief efforts. He also added that those who think that they can expel the Marxists from the PPP are seriously mistaken. Comrade Zuhaib Butt, president of the PSF Punjab and Dr. Salah ud din Haider also put their views before the audience. 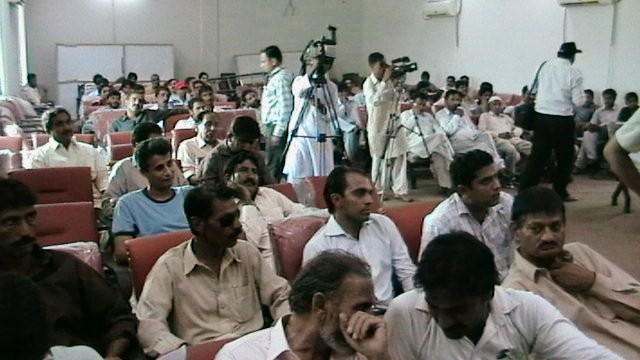 At the end Comrade Lal Khan was invited to the dice. The audience gave him a standing ovation. In his speech, he presented his analysis of the present socio-economic crisis. He said that the recent floods had shaken the consciousness of the poor people. They can see what their representatives are doing for them. He added that on the one hand the government is begging before the world community for funds for flood victims and on the other hand the Army's budget has been increased by Rs. 110 billion. The Pakistan Air Force has bought a new squadron of F-16 jets from Lock heed Martin and through this deal Army officials and some people's representatives are going to get commissions worth $662m. The dichotomy of the state and its institutions is evident. He criticised the current PPP government and declared the present leadership is the remains of the brutal dictator Zia ul Haq. He said that there is lot of talk going around about revolution among the right-wing parties. He said that there is not any chance or need of bourgeois revolutions of the 17th and 18th century types. But he said that nobody here talks about the Bolshevik revolution of 1917 in Russia which is the only way for a solution to the present socio-economic crisis. He urged comrades to go into the masses and feel their sorrows. He said we shall continue our struggle till the emancipation of the human race which is only possible in the current era through a socialist revolution.