Pakistan
Share
Tweet
Preparations are under way for the JKNSF convention on November 29, where close to 10,000 youth are expected to take part, to hear the main speaker, Lal Khan.

The preparations of the JKNSF convention to be held on November 29, 2008 at Liaqat Bagh Rawalpindi (Pakistan) are in full swing. A rally will be held from Committee Chowk to the Press Club at 2 pm and after that the convention will start. Comrade Lal Khan will be the chief guest in the convention. 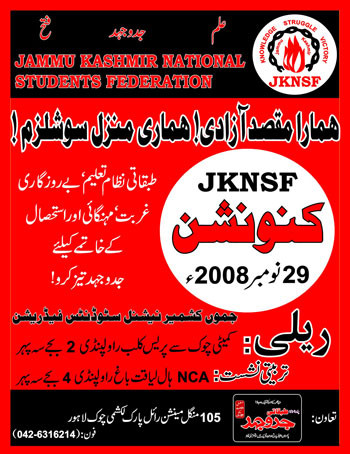 The target for participation of the students and vast layers of youth in this convention is almost ten thousand, for which all the comrades of the organization are working at their best especially in Kashmir and north Punjab. The whole of Kashmir and North Punjab is red with socialist slogans on the walls and streets. Leaflets are being distributed in all the colleges and universities of Kashmir and north Punjab on different youth and student issues such as unemployment, the class based education system, increases in transport fares, privatization of the colleges and universities, increases in fees and many more.

Camps are being held, rallies are being organized and the poster with the slogan "Our aim is independence and our goal is socialism" is being pasted in every nook and corner of Kashmir and North Punjab. Also this poster is being sent to all other regions of Pakistan from where a large number of delegates of the students and youth are going to participate in this convention.

Different committees like finance, security, management and political campaigns are working effectively to make the convention successful. This is one more step in building the forces for the socialist revolution in Pakistan and subcontinent that must eventually lead to a socialist federation of the subcontinent and the whole world.