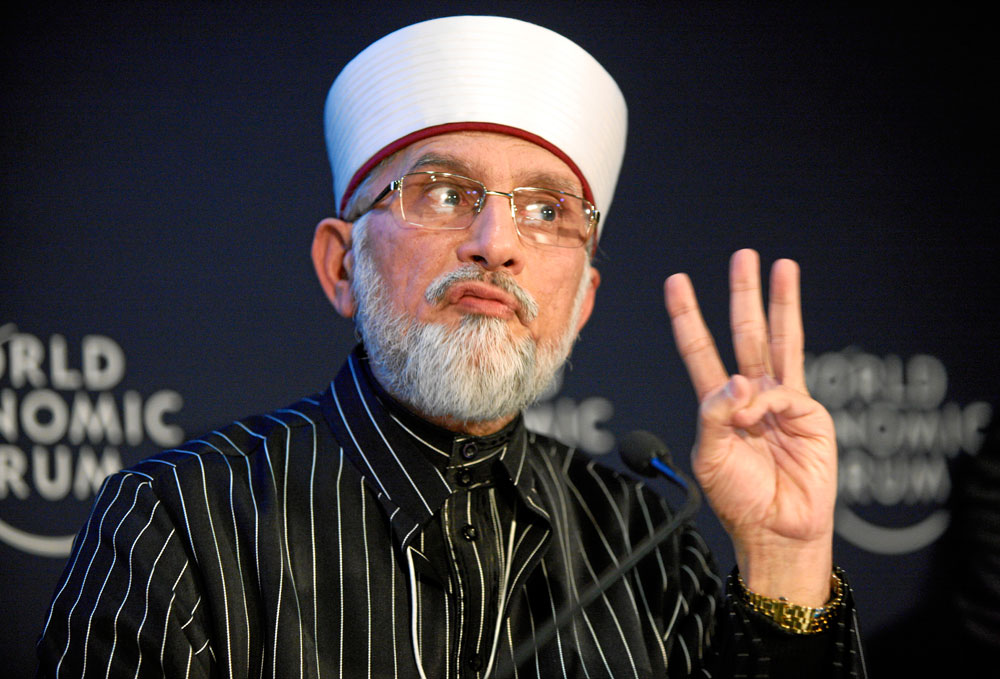 There is such a furore surrounding the movements of Qadri, Imran and most recently the PTI on the television screens and airwaves that ordinary people, who are already suffering from the brutal socioeconomic crisis, are left bewildered. The ongoing vicious cycle of talks and confrontations followed by the resumption of yet more talks, causes even greater despair for people’s already agitated minds and beleaguered souls. Some have come to the conclusion that if they avoided the television talk shows and news bulletins they would be better off. They could live without the stress and boredom the continuous rows and monotonous speeches with no real content or optimism. The bosses of the “free” media prioritise issues and political topics that hardly address or relate to the burning problems that are frustrating the masses. The corporate media is engaged in a conspiratorial silence that rubbishes the movements of the workers, peasants and youth struggling against oppression and misery stalking this land.

There have been several significant struggles of the working classes in these last few months which have been subjected to brutal repression by the state. Meanwhile the state conveniently avoided its characteristic ruthlessness against the ‘Dharnas’ and ‘shutdowns’ led by the politicians from privileged classes masquerading as the opposition.  The news of the workers’ strife is squeezed out of public consciousness as quickly as possible by the media: the fight of the OGDC workers against privatisation; nurses strikes; workers uprisings in various manufacturing and services sectors; and above all the militant and courageous peasant revolts in several regions, demanding better sugarcane prices. In another recent struggle led by ordinary citizens, kiosk keepers and IDPs in Dera Ismail Khan yet again faced severe state violence and a media blackout of this courageous crusade that won a temporary respite due to a bold, honest and revolutionary leadership.

On the morning of December 6, the district council administration of Dera Ismail Khan started an operation against hawkers and street vendors in the Tank Adda by ransacking their kiosks and carts. Two ministers of Jamaat- a- Islami in the government, in league with several billionaires, were illegally trying to occupy this state land which belongs to the District and Tehsil councils and is worth billions of rupees.  Ten acres of this land was leased to people who had been displaced by the military operation. Under the aegis of this KPK government of Imran Khan’s PTI and Jamaat-e-Islami, and supervised by government ministers, the District police and administration officials started this ruthless operation early in the morning. Armed with guns, batons and demolition equipment, they attacked the poor on the pretext of clearing the space for the market. The assault came without any warning. The administration had no legal grounds for this operation but they executed it to clear the land, after which they began to load the shopkeepers’ goods on to municipality vehicles. The poor shopkeepers tried to show the DCO the lease papers and receipts of the rent they had paid for 2015 but he refused to look at them and ordered the demolition of the shops. Left with no other option the small shopkeepers locked themselves inside their kiosks.

The police brutally dragged them out. Ali Wazir, a popular mass leader of the region rushed to the scene and asked the DCO to stop the operation. Ali contested the 2013 elections from NA 42 Wana South Waziristan, in which he was perfidiously defeated by a margin of just three hundred votes. This rigged result has been challenged in the Courts but the bosses are impeding the case as usual. The argument between the leaders of the resistance and the administration officials turned into a brawl. The gathering of poor shopkeepers, ordinary citizens and aggrieved displaced people started to swell. The administration’s invitation to talks was only a trap to arrest the leading figures.

The people of this, the second most important city in Pushtoonkhawa, reacted angrily. In their wrath they started pelting stones at the police, who were mercilessly beating them with batons. Ali Wazir and his comrades were moved to a police station first, and then they were taken to the torture cells reserved for terrorists. As soon as the news spread though, the students of Gomal University and other educational institutions initiated protest rallies and blocked the main roads. Other workers and lawyers joined the burgeoning protests. This put enormous pressure on the authorities. Given the tense situation the district administration moved the arrested leaders to a military installation.

However the masses continued the resistance. Ultimately the KPK regime had to retreat. Despite it being a Sunday and bail not having been granted for the arrestees, lawyers from Dera Ismail Khan managed get the leaders released after threatening to lock down the courts and seal the city.  The evicted kiosk and small shopkeepers have started rebuilding their dwellings and makeshift structures that were demolished. The land mafia have suffered a blow, although their plans remain intact.

This is Imran Khan’s ‘new’, ‘corruption free’ KPK. The Sharifs are responsible for the brutalities beings inflicted upon the ordinary people in Punjab and elsewhere. Other religious and ‘secular’ political parties that were and are now in power in the centre of the country or the provinces have only intensified the sufferings and miseries of the toiling classes with the passage of time. The PTI is behaving no differently in power. Its leadership is also riddled with billionaires, landlords, crony capitalists and ferocious exploiters of all types. But the struggles going on beneath the superficial, media buoyed ‘movements’ cannot be stymied or suppressed for long.

There are innumerable examples in recent local and world history of the ruling classes and their state using pre-emptive artificial movements based on the corporate media and sections of the petit bourgeois. The lawyers’ movement of March 2007 in Pakistan was one such example. Yet in spite of that, a movement erupted on class issues, cutting across the superficial media-bolstered movement of the judiciary, signalled by the arrival of Benazir Bhutto on October 18th the same year. Without a revolutionary policy of class struggle the upsurge suffered a tragic fate with the harrowing assassination of Ms Bhutto – but that is another matter. The present façade of campaigns by different sections or representatives of the ruling class don’t pose any real challenge to the system that governs society and torments the ordinary people.

This one incident of an abrupt mass revolt in D.I. Khan speaks volumes about the potential of the toilers and the youth to rise up against oppression and the rule of the rich. This can be done with lightning speed and with a gigantic united force of the oppressed people.  Revolutionary movements cannot be launched or achieve victory through media coverage and pampering by the intelligentsia of the status qou. However once these upheavals attain a certain quantitative strength, a qualitative vigour and a Marxist revolutionary leadership, no media empire or vicious state apparatus can dare ignore them, much less crush them. This is the lesson of history.