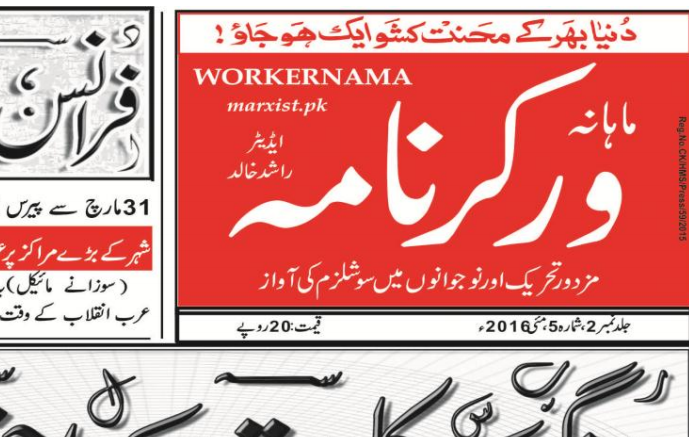 The special 2016 May Day edition of Worker Nama, the paper of the IMT in Pakistan, is available now.

The latest edition contains analyses about May Day and tasks of the labour movement, the current political crisis in Pakistan, the problems of the youth and other matters. The struggles of the workers of Pakistan International Airlines, of the workers of Water and Power Development Authority and of the young Doctors’ movement are also reported on in detail.

As usual the paper contains news of many ongoing workers’ struggles in various industries across Pakistan. This is in contrast to the official Pakistani bourgeois press which never reports on the struggles of the workers for higher wages, better living conditions and basic labour rights. The May Day issue of Worker Nama carries reports on struggles of workers in Port Qasim, Honda and other industries from Karachi, of brick kiln workers in Faisalabad and textile workers in Lahore along with reports from Dadu, Kamoki, Peshawar, Quetta, Bahawalpur, Multan and other cities of Pakistan.

This special issue also contains solidarity messages from Marxist organizations across the world. In the International section, the present issue carries articles about the Bernie Sanders Campaign in the USA and the crisis followed by Panama leaks. This is to emphasise the strengthening of the ties of the labour movement in Pakistan with the movements of the working class across the world.

This paper will be sold in May Day rallies and public meetings across Pakistan for just Rs. 20.

Comrades and Trade union activists across the world can download the following PDF version of the paper and print it out for distribution among Pakistani workers.