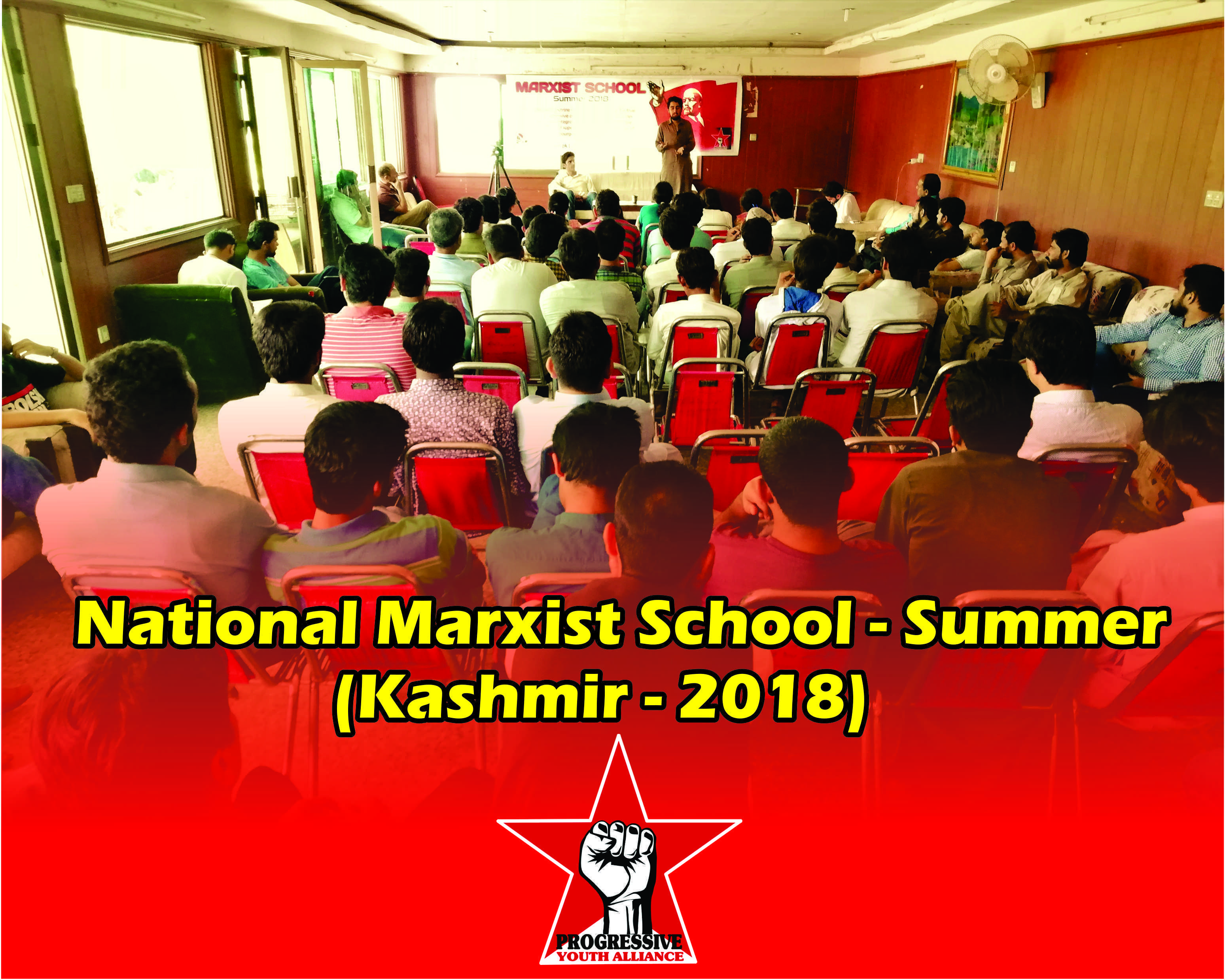 A two-day Marxist School was held in Rawalakot, Kashmir in which over one-hundred comrades participated from across Pakistan and Kashmir. Despite difficult economic conditions, long distances and sweltering heat, comrades arrived with great enthusiasm to take part in these discussions demonstrating their commitment to the ideas of Marxism. Preparatory schools were also held in various cities in which all the suggested topics were discussed in detail.

The School opened with a session on World and Pakistani Perspectives. Comrade Waheed Arif from Kashmir chaired the session while Fazeel Asghar, a student at BZ University in Multan, introduced the discussion (video). The introduction outlined the huge political and economic changes taking place on a world scale and how millions of students and workers are coming out to protest against the ruling class. He pointed out that the old-world order has broken and a new order is struggling to be born. The development of capitalism from the end of the Second World War to the election of Donald Trump in the American presidential elections was explained, with the recent trade war between the US and China, and its impact on the world economy highlighted. Comrade Fazeel also dealt with the economic crisis of various European countries with a special emphasis on Italy. He also described the conditions of the working class in Latin America, and welcomed the election of López Obrador as the new president of Mexico. The crisis in the Middle East and the crimes of imperialist wars were also explained. 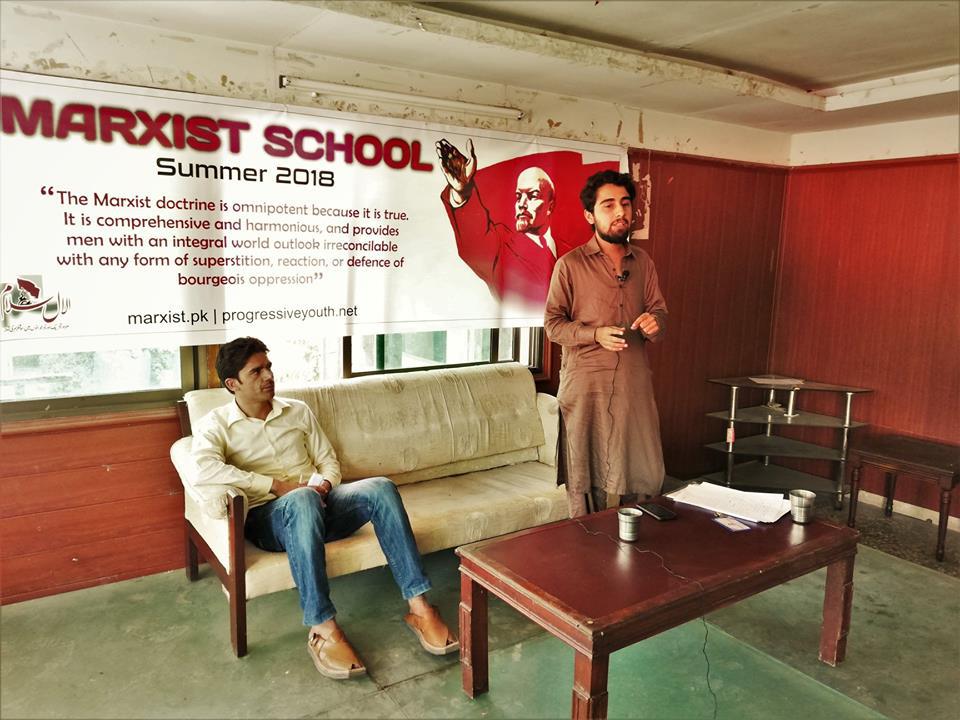 Fazeel Asghar speaking on Pakistan and world perspectivesOn the situation in Pakistan, he described the fraudulent election results and explained that the incumbent government will not be able to solve any of the problems facing the masses. The contradictions of US and Chinese Imperialism in the country and the resulting impact on the social, political and economic situation was also dealt with. As Fazeel pointed out, the new finance minister has already announced a huge swathe of privatisations and cuts in the living standards of the working class, who are living in barbaric conditions as it is. This will only sharpen the class contradictions leading to new movements of students and workers in the coming period.

The introduction was followed by questions and contributions from many different comrades including Khalid Mandokhel (Balochistan), Mishal Wyne and Suhail Rathore (Punjab University Lahore), Siddique (Malakand), Umer Riaz (Islamabad), Salma (Gujranwala), Adil Rao (Karachi) and Adam Pal. All the comrades elaborated various aspects of the lead-off and expressed their opinions on questions raised during the discussion.

Fazeel Asghar then summed up the discussion by saying that a revolutionary party is urgently needed in Pakistan. This must be a party based on the ideas and methods of Bolshevism; a party capable of leading a socialist revolution, which is the only way out of the misery capitalism heaps on the working class and the poor of the country.

The State and Revolution

One of the sessions focused on Lenin's marvellous book The State and Revolution. It was chaired by Comrade Siddique while Mahbaloos Asad, a student of QA University Islamabad, introduced the discussion. 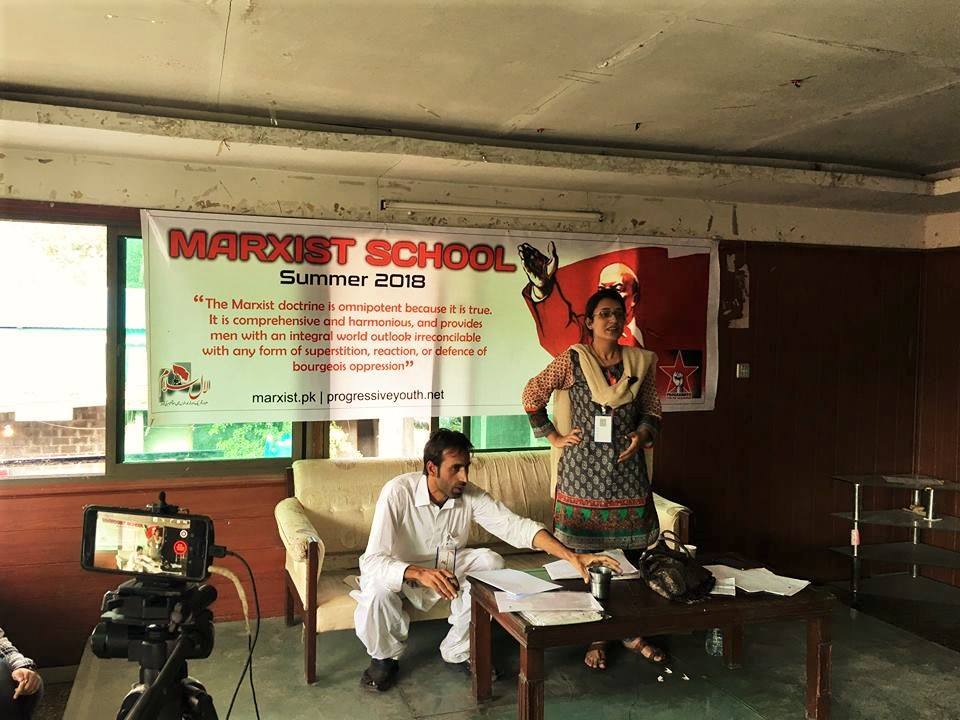 Mahbaloos Asad leading off on State and RevolutionIn her lead-off she explained the importance of the book and how the question of the state became a concrete question during the Russian revolution of 1917. She also explained how the state emerged using Engels’ The Origin of the Family, Private Property and the State. The Marxist theory of the state was compared with other prevalent theories. It was explained that all these theories, especially anarchism, fail to explain the question on a scientific basis. Mahbaloos also explained the role of the workers’ state after a socialist revolution, citing examples from the Soviet Union under the leadership of Lenin and Trotsky. She also explained the bureaucratic degeneration of the Soviet Union under Stalinism, and how it led to a deformed workers state. The question of colonial revolutions and the role of Bonapartism was also discussed and the talk was concluded with an explanation of the idea that, in a classless society, the state would “wither away”.

This was followed by questions and contributions from many comrades including Younas Wazir (Waziristan), Mehwand Khan (Quetta), Yasir Irshad (Kashmir), Sibghat Wyne (Gujranwala) and Rashid Khalid.

Mahbaloos then summed up the discussion by highlighting the false concepts usually attributed to primitive communism. She also explained in detail the structure of the workers’ state and how it will be able to provide all the basic necessities to the masses. 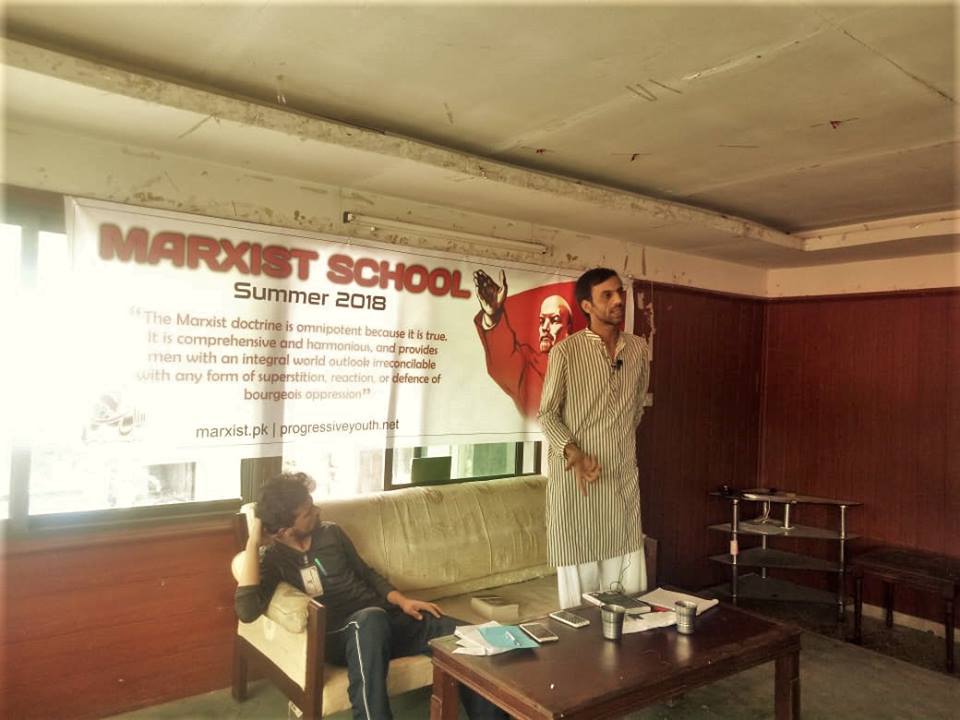 Rashid Khalid leading off on CapitalThe second day began with a discussion on the second and third chapters of Capital: Volume 1, on exchange and money, or the circulation of commodities. Rashid Khalid introduced the discussion (video) while Razzaq Ghurzang from Balochistan chaired the session.

Rashid explained the basic terminologies of value, use value and exchange value as described by Marx in the first chapter of Capital. He then laid out the development of money and how various metals emerged as universal equivalents. The historical role of gold as universal equivalent as well as the emergence of currency notes in various countries of the world was discussed. He also highlighted the section of Capital dealing with the process of exchange between commodities and money through C-M-C and M-C-M. Finally, the social impact of the process and the false notion that money is the source of all wealth were dealt with.

After the lead-off, there were questions and contributions from Adeel Zaidi (Lahore), Tassawar Ayub (Faisalabad), Nasira Wyne and Sibghat Wyne (Gujranwala), Rawal (Multan) and Adam Pal. They highlighted various aspects of this process and explained the importance of Marxist ideas to understand the present world economic crisis.

Rashid then summed up the discussion. He pointed out that these chapters are not only about the economy, but are also a great example of the application of Marxist philosophy to economics. Moreover, Capital is also a literary masterpiece, and Marx uses metaphors, satire and literary examples to explain his point of view. To conclude, he said that the proof of the pudding is in the eating, and anyone who wants to enjoy all these mesmerising pleasures must read this marvellous work in original. 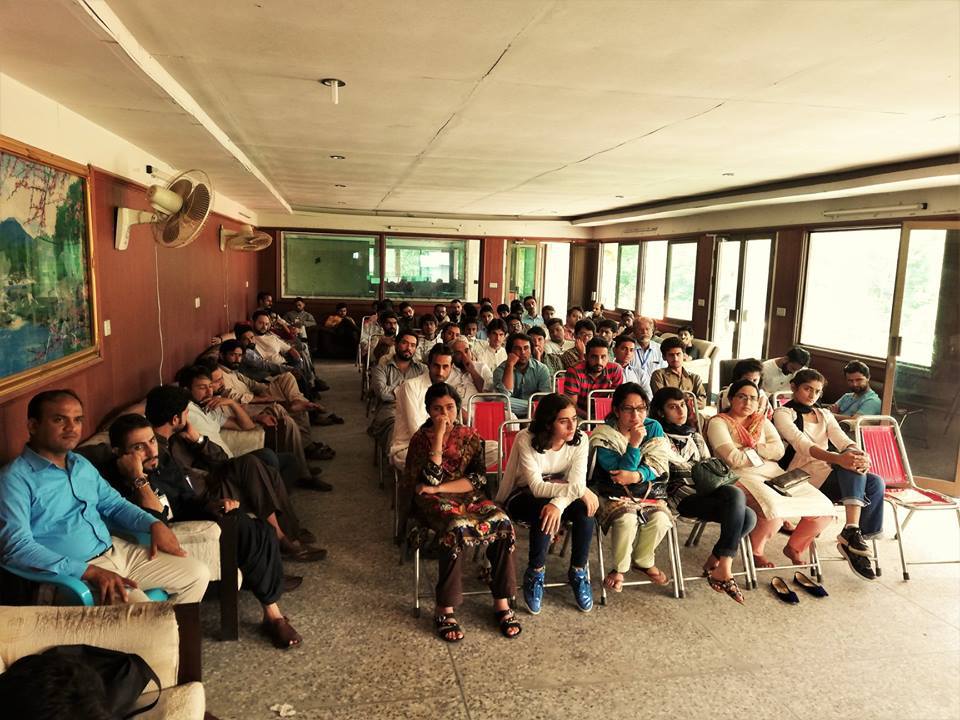 The Marxist Critique of Post-Modernism

The last session of the school was on the Marxist critique of Post-Modernism, which was led off by Adam Pal (video) while Akhtar Munir, a young poet from Faisalabad, chaired the session.

Adam Pal explained the counter-revolutionary character of Post-Modernism and how imperialist powers have used it to malign Marxism. This school of thought fails to understand the degeneration of the workers’ state under Stalinism and portrays this totalitarian caricature of socialism as the true depiction of Marxist thought. He said that these ideas humiliate and degrade the role of working class and ordinary workers are considered ignorant while university professors and intellectuals putting forward such ideas are seen as towering personalities. Class contradictions are either completely rejected or given a secondary role, which is completely against Marxism. 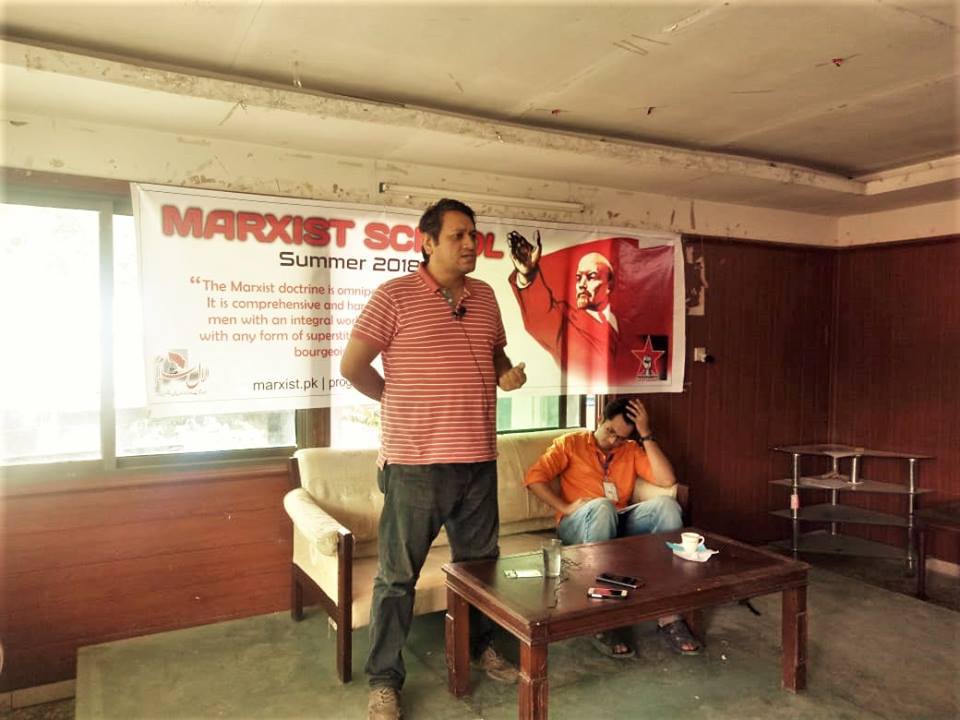 Adam Pal leading off on Post-ModernismHe then explained the importance of Marxist ideas, with a detailed defence of dialectical materialism, historical materialism and Marxist economics. This was then compared with the post-modernist school of thought, which is based on subjective idealism and has nothing to do with Marxism or the class struggle. He also explained that, just because something calls itself new, this doesn't make it correct. In any case, these ideas are new, but are the offshoot of Kant's idealism, which had already been demolished by Hegel. Adam Pal then explained the ideas of the Greek philosopher Gorgias on which post-modernism is based, and why Marxism rejects this idealist philosophy.

He also criticised the impact of these thoughts on politics and explained how movements like feminism and queer theory base themselves on such ideas. The role of genuine Marxists, who always support the emancipation of women and are at the forefront of struggles for democratic rights, was contrasted with that of feminist ideas, which don’t want to change the material conditions of women or challenge the capitalist mode of production. The only way to truly fight for the emancipation of women is to link these individual democratic struggles with the overthrow of capitalism without which women will never be emancipated. He also discussed the plight of oppressed nationalities and pointed out that the only way to rid the world of national oppression is by overthrowing capitalism.

After the lead-off a number of questions and interesting contributions were made. Usman Zia, a young poet and lecturer of special education in Lahore, highlighted the bankruptcy of modern Urdu literature, which is greatly influenced by post-modernism. He gave an example of the renowned poet Zafar Iqbal who writes poetry where none of the verses have any meaning and merely consist of rhyming phrases. He contrasted this to the rich traditions of Urdu poetry, and how poets like Faiz, Sahir and Jalib contributed to revolutionary movements – both during their lifetimes and to this day across the sub-continent.

Adam Pal then summed up the discussion and the School as a whole. He said that, the only way for everything that had been discussed over the two days to find their true meaning, was if they were spread to wider layers of the working class and the youth. In the coming period, we will witness huge movements of students and the working class and we should be prepared for that. We have a historic duty to fulfil. To end the poverty and misery in society we must struggle for a socialist revolution in our lifetime.

The school ended with the singing of International.