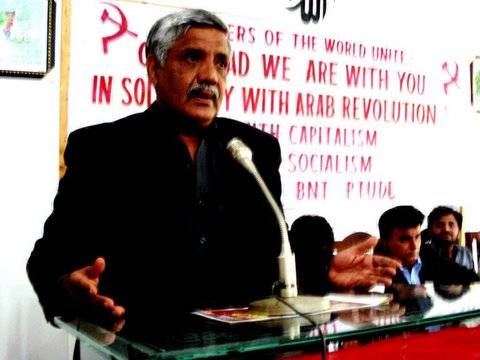 On 6th Feb a seminar was organized at the Hyderabad Press Club to show solidarity with the great Arab Revolution which is affecting the whole world and to develop a clear perspective in this rapidly changing objective situation. A great number of students, youth, women, workers and trade union activists were in attendance. The main speaker was Dr. Lal Khan, editor of the Asian Marxist Review, while other speakers included Riaz Hussain Lund, Chairman of the PTUDC, Paras Jan, Information Secretary of the PTUDC and Anwar Panhwar PTUDC Sindh President. 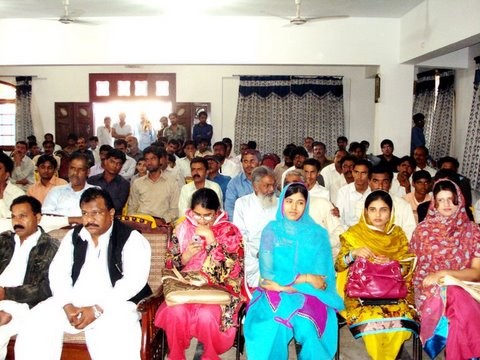 The speakers said that there is a revolutionary situation all over the Arab world including Tunisia and Egypt. The people have come onto the streets for their basic necessities. The mass protests in the Middle East have forced the ruling class to flee after decades of oppressive dictatorships and kingdoms. Civil society and the mainstream media are painting a distorted picture of these events. In fact this is a revolutionary movement which due to lack of leadership is not being transformed into a socialist revolution.

Drawing parallels between Pakistan and Egypt the speakers explained that in Pakistan poverty is far higher than in Tunisia or Egypt. In Tunisia 40% people live in poverty, for Pakistan the figure is 60%. The state is much weaker and more unstable than in these countries and the current situation in the Middle East can spark a similar movement here as well. The difference is that in Tunisia and Egypt there is no revolutionary party which can transform this movement into a socialist revolution, but in Pakistan we have the presence of a strong Marxist tendency.

Comrade Lal Khan outlined the Arab revolution in detail and said that it is only the beginning of a global revolutionary period and a prelude to world socialist revolution. He said that capitalism is failing all over the world and a decisive defeat of this rotting system is necessary in order to get rid of it. He presented a historical analysis of all the movements in the Middle East and said that the Egyptian revolution would not remain confined within its borders and it would have its affects on a world level, particularly on Pakistan where the conditions are ripe for a mass revolutionary movement. But the movement in Pakistan would not have to wait like what was happening in Egypt and the movement would definitely meet its destiny which is a Socialist Revolution.