Pakistan
Share
Tweet
On Saturday, November 29, 2008 a huge procession of the Jammu Kashmir National Students Federation (JKNSF) marched from Committee Square to the Rawalpindi Press Club, at the historic Liaquat Bagh, where a large public meeting was held, in which over 4,000 students from all over the country attended.

On Saturday, November 29, 2008 a huge procession of the Jammu Kashmir National Students Federation (JKNSF) marched from Committee Square to the Rawalpindi Press Club, at the historic Liaquat Bagh, where a large public meeting was held. The procession passed through the Murree (Benazir) Road, the largest avenue of the twin cities of Rawalpindi-Islamabad, the capital of Pakistan. Thousands of students from Kashmir and across Pakistan participated in the rally. A large number of delegates joined the JKNSF convention later at Liaquat Bagh. All the comrades were raising slogans like "Down with imperialism, rise up for socialism!", "Inqlab, inqlab, socialist inqlab!", Revolution! Revolution! Socialist revolution! No to Religious War! No to National War! Only Class War! Class War! Long live Revolutionary Socialism! 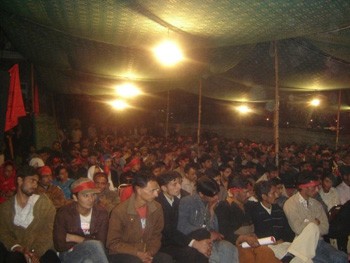 The participants held banners with the statements "No to privatization, yes to nationalization under workers' control", "Chavez we are with you, down with imperialism, rise up for socialism!", "Struggle continues till socialist victory!" and others in favour of socialism and against increasing unemployment in the present financial crisis. Comrades from all over the country and from Rawalpindi gathered at Committee Square where a huge caravan of the comrades from Kashmir joined them. This caravan comprised of delegates from every corner of Kashmir. About fifty busses came from Muzaffarabad, Rawalakot, Bagh, Kotli, Sansa, Mirpur, Khaigala and all other areas of Kashmir. They were holding red flags with hammer and sickle on them. When they joined the comrades at Committee Square the roads were blocked and the rally moved towards the historic Liaquat gardens.

The rally ended at the Press Club where a large number of comrades were already waiting for the rally. At the gate of Liaquat Gardens thousands of the comrades raised slogans against the IMF and the World Bank, the anti working class policies of the present regime, for the national, social and economic freedom of the Kashmiri masses and against the capitalist system. The venue of the convention was covered with banners and red flags. The programme started with revolutionary songs and poetry. Then started the educational session in which comrade Lal Khan gave a marvellous speech to over 4,000 students from all over the country. He started by giving the message of revolutionary greetings to the Convention from comrade Alan Woods, the leader of the International Marxist Tendency to which the JKNSF is affiliated. In his speech he explained the reasons of the present economic crisis and also the perilous condition of the masses the world over. He also said that the only solution to all the problems of the world like poverty, unemployment, inflation and misery was the socialist revolution. 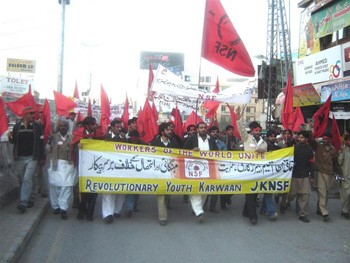 He also emphasized the importance of the subjective factor for the revolution to be victorious. He believed that the comrades gathered at this huge Convention will play a key role in the next uprisings of different proletarian and student movements. He said that our goal is the socialist revolution of Pakistan which will lead to the Socialist Federation of the Subcontinent, which was the only way to end all forms of oppression and achieve national liberation. Such a Socialist Federation would pave the way for the success of the World Socialist Revolution, for which we all have to fight to save human civilization and we will surely win. You could hear a pin drop in this gathering of thousands of comrades during his 90 minute speech and at the end there was a standing ovation for about five minutes.

After dinner the new slate of the leadership of JKNSF was voted upon and elected unanimously. Comrade Amjad Shahswar was elected as president, comrade Naveed Latif as general secretary and comrade Sajid Kashir as chief organiser. All three, together with members of the executive then took the oath. They vowed to continue the struggle till the socialist federation of the sub-continent which will lead to world socialism. In their oath they pledged their faith and loyalty to the International Marxist Tendency IMT and its ideology and perspectives. The programme ended with the revolutionary spirit at its peak and all the participants were instilled with a greater resolve and confidence in the victory of revolutionary socialism.

There was also a large stall of Marxist literature. Almost all the literature was sold out. The translated version of the IMT manifesto on the present world crisis and comrade Lal Khan's new book "Pakistan's Other Story, The 1968-69 revolution" were very much in demand. These will also help in the ideological development of the comrades of the JKNSF and in other parts of Pakistan in the immediate future.