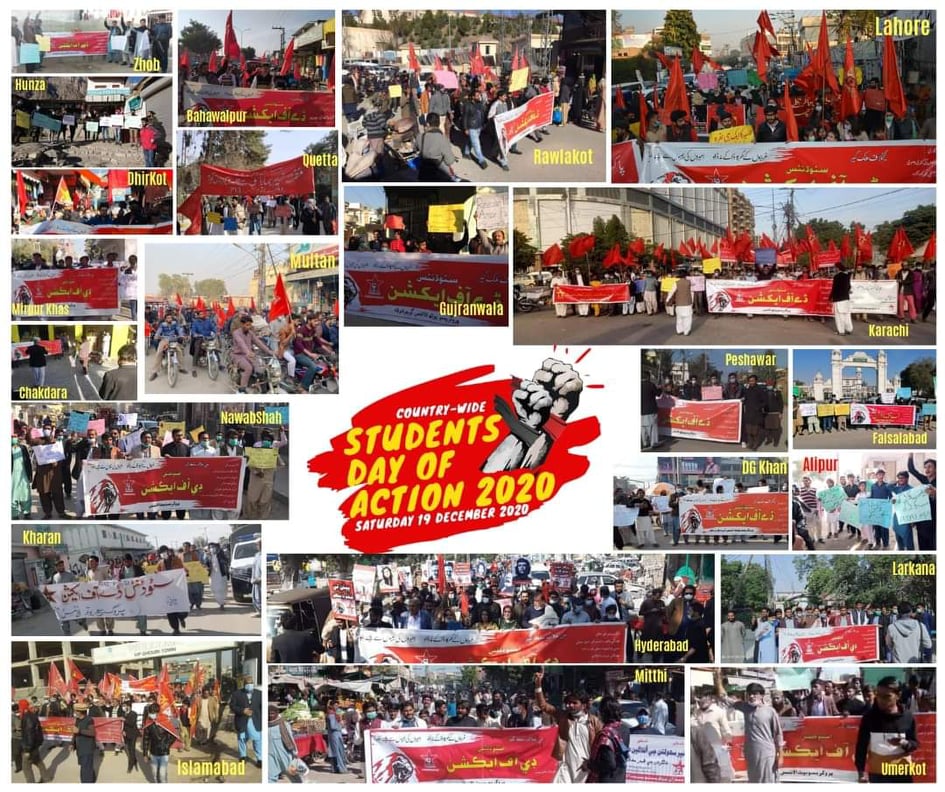 On 19 December 2020, the Progressive Youth Alliance (PYA), a revolutionary organisation struggling for the rights of students and youth in Pakistan, organised a nationwide protest, entitled “Students Day of Action” (covered by Pakistan's oldest English-language newspaper): for free education and the restoration of student unions; and against sexual harassment of women, state abductions and unemployment. Participants in all cities also raised slogans for the release of comrade Amar Fayaz, who was abducted by the state authorities last month. Still, his whereabouts are unknown.

Almost all the major cities like Karachi, Islamabad, Multan, Quetta, Hyderabad and Lahore saw an impressive turnout, with hundreds of students and workers on the streets.

Karachi is the biggest city of Pakistan with a very ill-managed transport system. People have to travel for hours to get from one point to another. Despite that, there was a massive rally in the city. Students and workers reached Regal Chowk Sadar from Sachal Goth, Marvi Goth, Malir, Shah Faisal, the New Karachi industrial area, Sharafi goth and Karachi University. The rally started at 2pm at Regal Chowk Sadar and reached the Karachi Press Club, where it turned into a protest. Comrades Adil Aziz, Zainab, Aftab and Anand from the PYA; Anam Khan from the Red Workers’ Front (RWF); Sami from the Shaheed Zulfikar Ali Bhutto Institute of Science and Technology (SZABIST); Ali from the Democratic Students Federation (DSF); Ramzan from the garment factory and Aziz Khan (president of CBA General Tyres) spoke at the end of the rally.

Comrade Ameer and Comrade Zainab lifting up the grounds of Saddar with revolutionary slogans. #StudentsDayOfAction2020 pic.twitter.com/6HAla56MgN

There was also an impressive turnout in the capital of Pakistan, Islamabad. Hundreds of students and workers joined the bike rally, which started in Ghouri town and ended at Hostel City. On the way, it stopped at different locations, where comrades of the PYA made speeches. The first stop of the rally was at Burma Town, followed by Tramri Chowk and finally Hostel City. Health workers from the Pakistan Institute of Medical Sciences (PIMS) hospital, who are protesting against the privatisation of their institution, also joined the rally in large numbers.

Comrades of the PYA have been at the forefront of the anti-privatisation movement of PIMS workers in Islamabad. The workers forcibly laid off from Allama Iqbal Open University also joined the rally, which only gained momentum from the start, ending with big numbers and massive enthusiasm. Sangar Khan, Ali Raza, Haris and Masood from the PYA; Umer Riaz from the RWF and a representative of the Grand Health Alliance spoke at the end.

Multan, the biggest city of South Punjab, saw a brilliant turnout. More than 100 bikes travelled from Chungi No. 9 to Ghanta Ghar. A large number of participants were from the New Multan and Shamsabad localities, where comrades of PYA did a massive campaign to build for the rally. A new branch of the PYA was also announced in New Multan. Students from Bahauddin Zakariya University, Emerson College and other institutions also joined the bike rally. Some left-wing activists also took part. The bike rally ended at the clock tower (Ghanta Ghar), where Farhan Rasheed (organiser of PYA Multan), Rawal Asad (organiser of RWF Multan) and many others made speeches.

Quetta, the most important city of Baluchistan, saw a massive turnout, with hundreds of students, workers, political activists and trade union representatives joining the rally. The rally started in Metropolitan and ended at the Press Club. Comrades Basit Khan, Seema Khan and Ameer Ayaz from PYA, Razzaq Ghorzang from the Red Workers Front, Mama Salam Baloch (Chairman Pakistan Workers Federation), Pir M Kakar (from the Water and Power Development Authority, WAPDA) and other political activists spoke at the end of the rally. The rally clearly shows that youth are interested in revolutionary politics and socialist ideas, rather than the obsolete ideas of nationalism. It is usually stated that "there is no room for new organisations on the left other than traditional ones", but the rally and overall growth of the PYA prove this absolutely wrong. There is a vast audience for Marxist ideas.

There was a massive turnout in Hyderabad, the second-largest city of Sindh. More than 200 students, workers and political activists joined the rally, which started from Nasim Nagar and ended at the Hyderabad Press Club. Placards of Che Guevara, Karl Marx and Leon Trotsky were raised high during the rally. The youth of Sindh are also rejecting nationalist politics, which, at one time were left-leaning have now turned into their opposite and become reactionary. This rally again proves the massive thirst for scientific revolutionary ideas amongst the youth. Comrades Sarmad Siyal from the PYA, Ali Essa from the RWF, Aqib (a representative of protesting students from PMC), Jai Kumar from the Progressive Students Federation (PRSF) and Samina Wahid (a Sindhi poet) concluded the rally with speeches.

There were also big numbers in Lahore. A bike rally started at Ichra at 1pm, and reached the Press Club via Chaburji. It travelled more than 15km. On the way, comrades raised revolutionary slogans that received a brilliant response, not just from the participants of the rally but from the people watching from their shops and houses. A caravan joined the rally at Chaburji. Laid-off workers of the Pakistan Steel Mill also joined in. Comrades Sanaullah Jalbani, Babar Ali, Sabir Gondal, Mishal Wyne and Rai Asad from the PYA; Rao M Naeem (All-Employees Action Committee of the Pakistan Steel Mill); Dr Farhan Gohar from the Grand Health Alliance, Maqsood Hamdani from the WAPDA and RWF; and Nisar Safdar (a prominent lawyer) spoke at the end.

Small and less-developed cities like Mithi (Sindh) and Kharan (Balochistan) also saw outstanding turnouts. Mithi is a backward area in Sindh with no basic facilities. The campaign got an overwhelming response here. Similarly, Kharan is one of the most-backward areas of Balochistan, which has faced many conflicts in recent years. Amid these difficult conditions, our comrades mobilised more than 60 people.

This was the largest political event organised by any single left-wing organisation in Pakistan in recent history. The PYA mobilised thousands of people across the country, while the educational institutions were closed. This also demonstrates that students and workers are full of anger and looking for a radical programme. There is a huge political vacuum in Pakistan. All the political parties have been discredited due to their anti-working class policies. Medical students are protesting across the country. We could witness a massive nationwide outburst soon. Already a massive strike has started in Rawlakot and adjoining cities of Kashmir against the elimination of subsidies and price hikes for flour.

Within the confines of capitalism, no solution is possible, and the anti-working-class policies of Pakistan's ruling class will continue. The economic crisis will sharpen, the divide between rich and poor will widen; poverty, homelessness, and a lack of education and healthcare will get more severe. Only a socialist revolution by the working class can solve all the issues.

Revolutionary leadership is required to present the radical way ahead for the working class, and organise them to overthrow the capitalist system. This Students Day of Action was one step forward in this direction.

There are many more images and videos of the Day of Action. For all of these, check out the Progressive Youth Alliance's main Facebook page!