International Marxist Tendency
Share
Tweet
At half past nine on Friday 27th March, in the magnificent surroundings of the Aiwan Iqbal Hall, Lahore, the 2009 Congress of the Pakistan Marxist Tendency commenced its sessions in an atmosphere of tremendous enthusiasm. As the delegates and visitors poured into the hall, they shouted revolutionary slogans such as "Inqlab! Inqlab! Socialist Inqlab!" (Revolution! Revolution! Socialist Revolution!) 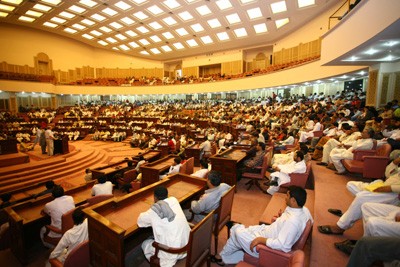 This year security had to be especially strict as a result of the threat of attacks and suicide bombings by reactionary fundamentalist terrorists, who, as is well known, operate under the control of the Pakistani state security services (the notorious ISI). But the strict revolutionary discipline and highly efficient organization of the comrades provided the necessary antidote to this menace.

The western media like to portray Pakistan as a hotbed of Islamic reaction. But this is a very distorted view. The forces of fundamentalist reaction represent a small minority, centred on a few areas. The workers and peasants of Pakistan have been mainly immune to their reactionary demagogy. When Benazir Bhutto returned to Pakistan in October 2007 two and a half million people (overwhelmingly poor) came onto the streets to greet the PPP leader. This completely confirmed the perspectives of the Struggle.

After the assassination of Benazir, there was a spontaneous mass uprising, which unfortunately lacked direction and therefore did not achieve anything. But this showed the explosive nature of the situation in this country. In the subsequent elections, despite the usual rigging, the PPP won the majority, but under the leadership of Zardari, Benazir's husband, the PPP government has pursued a right wing course, disappointing the hopes of the masses.

This situation is very favourable situation for the development of the Struggle, especially since it purged its ranks of an opportunist grouping around Manzoor Ahmed, the former MP and ex-Marxist, who sold out to Zardari. The break with Manzoor, far from damaging the Struggle, has enormously increased its authority and prestige in the eyes of the activists and the masses. In the very corrupt world of Pakistani politics, the Marxist Tendency has shown by its decisive actions that it is not prepared to tolerate careerism and corruption in its ranks.

The right wing policies of the PPP leaders, who have completely capitulated to the US imperialists and are carrying out a scandalous programme of privatization at the behest of the IMF, is provoking widespread anger and disgust among workers and PPP activists, who are now turning in increasing numbers to the Marxists. The rapid growth of the Struggle was shown by the remarkable attendance at this congress: over 2,000 delegates and visitors with workers, peasants, trade unionists, women and youth from every area in the country. The following is a rough breakdown by areas, towns and cities: 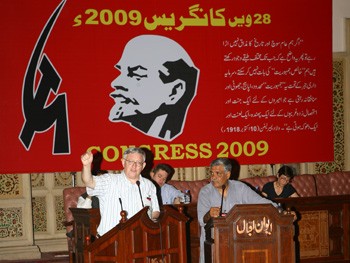 There were also many young people from the following universities:

In addition to this there were many PPP activists and other organizations, including the People's Student Federation, JKNSF, Unemployed youth movement (BNT), and the Journalists' organization.

There was also a good representation of female comrades present.

As in previous years, the proceedings were interspersed with readings of revolutionary poems, written by the comrades themselves, as well as frequent revolutionary chants and songs. A striking indication of the echo that the ideas of The Struggle are getting in different social layers was the presence of several editors from the TV channel Five, which recently broadcast an hour-long interview with Alan Woods on the world economic crisis.

Even more striking was the presence of two of the most famous pop singers in Pakistan: Jawad Ahmed and Shahzed Roy. Jawad actually composed a revolutionary song dedicated to the Congress, which he sang with a powerful voice to the delight of the comrades present, who clapped rhythmically and joined in the chorus.

The congress proceedings opened with a speech by comrade Alan Woods on World Perspectives, in which he compared the present crisis of world capitalism to the decline and fall of the Roman Empire. He dealt first with the economic crisis and pointed out the bankruptcy of bourgeois economics and the perplexity of all the governments who do not know what to do.

He ferociously lashed the bankers as parasites who are being rewarded with the money of the taxpayer for their crimes, robbery and swindling: "There is no money for schools, houses and hospitals, but when it comes to the banks, there is always an open chequebook!" 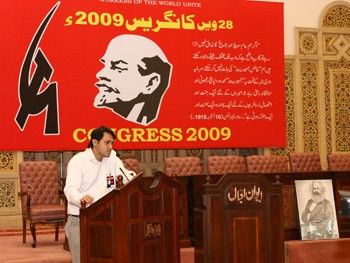 Adam Pal explaining the origins of the state from a Marxist point of view as an instrument of class oppression.

Alan then dealt with the wars in Iraq and Afghanistan and pointed out that this shows the limits of the power of US imperialism. He said, amidst applause: "The Americans will have to get out of Iraq like a dog with its tail between its legs." He then went on to lambaste the war in Afghanistan, which he said the imperialists could not win but which has destabilised Pakistan.

Alan's speech was greeted with a standing ovation from the congress. There were a large number of questions, which Alan dealt with very ably in his reply. Many were on the national question, and some of these were from comrades from Kashmir and war-torn Waziristan and Swat (there were comrades also from these areas present). Alan stressed that the only way to solve the national question was for the workers and peasants to take power, like the Bolsheviks in 1917. He warned that the reactionaries of Pakistan and India were plotting to push these countries into war to divert attention from the social crisis: "The workers and peasants of India and Pakistan have no interest in war," he said amidst applause: "Our position is: no war but the class war!"

This theme was continued in the next discussion which was on The State. Comrade Adam Pal led off, explaining the origins of the state from a Marxist point of view as an instrument of class oppression. He went on to show the complete degeneration of the Pakistani state today, which is torn asunder by internal contradictions, one sector of the army backing the Taliban and another subordinate to US imperialism. Adam also exposed the so-called lawyers' movement, which has been demagogically backed by every Tom-Dick-and-Harry from the Islamic fundamentalists and the liberal NGOs to the harebrained sects.

There followed a lively discussion with a very impassioned speech from a comrade from Pukhtoonkhwa, denouncing the slaughter of civilians by US bombers and artillery, which has provoked a massive wave of refugees and terrible suffering of the population.

The first day of this marvellous congress finished at 5pm local time and this evening there are commissions on trade union work, youth and women. The congress will resume its work tomorrow morning.

Read the report of the second day.