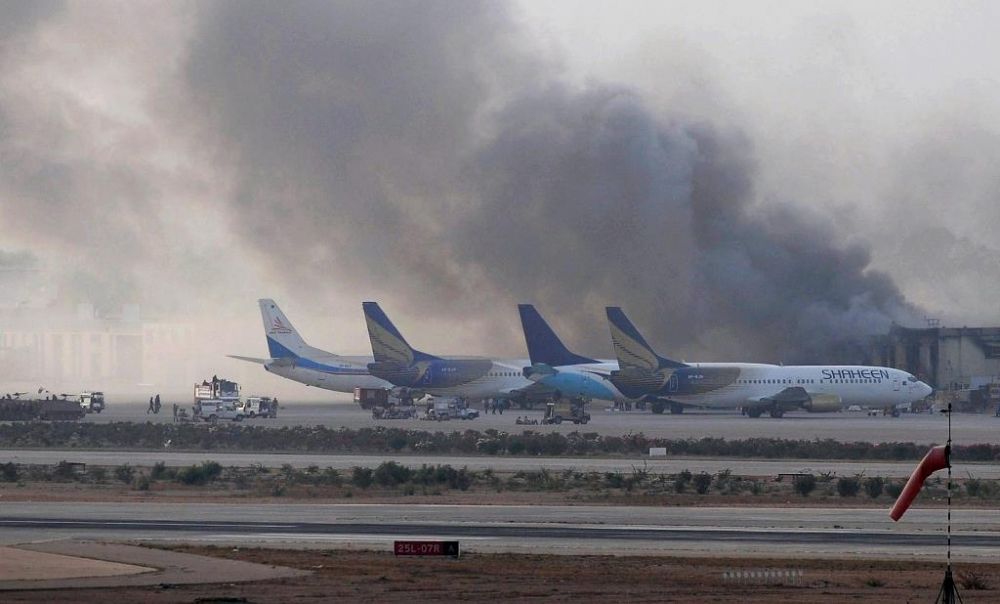 At dawn on Sunday, June 15 the Pakistan government gave the green signal to over 30,000 ground troops, backed by air force jets, to move into action in North Waziristan. This is the beginning of a long talked about and expected military operation against the many and numerous Islamic terrorist outfits that have been wreaking havoc throughout the country for almost two decades. The terrorist attack at the Karachi Airport in the preceding week seems to have been the final straw.

However, irrespective of various spins and gloss from Sharif and his coteries, it was the “generals” who decided that “enough is enough”. The reasons for the top brass to ultimately break the stalemate are many. Perhaps the most forceful and compelling reason was the pressure building up within the ranks of the military due to the increasing number of causalities, the increasingly eroding military credibility in society, the immoral and ill-gotten wealth of the top brass and the elite giving rise to unprecedented inequality and the fallout from the shooting of a controversial TV anchor near the Karachi airport.

According to a military spokesperson, 167 individuals including the Uzbek mastermind Abu Abdul Rehman al-Maani, believed to have helped orchestrate the five-hour Karachi airport siege, was thought to be among the dead along with many Uzbek and other foreign and local commanders. There is now a mass exodus of the civilians coming out of the North Waziristan agency, the vast majority of whom are heading towards an already war torn Afghanistan.

The political establishment across the spectrum have come out in support with the PPP leading the loud chorus, closely followed up by the religious right, including the proscribed Islamic groups, who came out with their guns blazing and calling on the military’s might to eliminate terrorism. Imran Khan’s PTI looked quite awkward when its “core committee” announced their support for this operation.

After the judiciary’s restoration movement in 2007 this is yet another occasion when the conservatives, liberals, the secularists and the Islamists and the so-called left and the extreme right wing have shown an astonishing solidarity for the sake of their country. These air-conditioned politicos mistakenly think the military operation will surgically wipe out the terrorist networks. This shows the level of their understanding of the crisis this country is afflicted with and the catastrophic socio-economic situation society is mired in.

Despite all the mantra about the first ever hand over of civilian regime and the deepening of democracy, the presence of the army is now more visible and glaring in all cities and towns of Pakistan than even during the periods of martial law. As soon as the operation started, the scenes in the country were reminiscent of the declarations and impositions of martial laws in the past. Military vehicles and APC’s are patrolling all the major cities and towns with numerous checkpoints making day to day movements for ordinary people a cumbersome affair. The media moguls have given instructions for patriotic and nationalist songs to be broadcast with many anchors vociferously beating the drums of chauvinistic sentiment as if the country had gone to war.

The present rulers are terrified despite their massive security apparatus. Their cowardice is perhaps best expressed by the “Lions of Punjab” [a mocking reference to the Sharif brothers], with the Chief Minister Mian Shahbaz Sharif personally visiting and pleading the Lahore garrison Corps Commander to provide him military protection in his palatial mansions at Model Town in Lahore [a plush residential suburb for the rich]. His police force of 196,000 personnel which has terrorised the ordinary working population of the province seems inadequate to him. Islamabad’s security, where the elder brother is the third time prime minister has already been handed over to the military.

This is not the first time the Pakistani military have announced such an operation. There have been several in this region alone. Most were aborted for reasons known only to the ruling elites. The military operation in Baluchistan has inflicted horrendous brutalities both by the state and non-state actors. The Shia and Sunni proxies, supported by the Iranian and Saudi oligarchies for their own imperialist designs, are shedding Pakistani blood. But it is mainly the Hazara Shias that are the victims of this brutality, mercilessly butchered by the Islamic sectarian beasts. The state has not only failed to guarantee protection, but according to some is encouraging this horrid carnage.

The situation in Karachi is far worse with numerous military and paramilitary operations over the years. The military operations are everywhere in one form or another, but in the recent period they have become more frequent and bloody for the military, with ever increasing pressures and tensions within the state. The military has fought three disastrous wars, imposed four dictatorships and directly ruled the country for more than 50% of the country’s rather short but extremely chequered history. The only think they have achieved is greater suffering and an intensified crisis in society. However, if the military have proved to be a disappointment for the rulers of this country, their “democracies” have been even bigger failures.

North Waziristan is rightly described as the centre of gravity of terrorist activity. Groups like Gul Bahadur, the Haqqani network (“good” Taliban), the so-called TTP, East Turkmenistan Islamic movement led by the Uzbeks, remnants of Al-Qaida and Al-Arab terrorists (“bad” Taliban) are running bloody havoc. The relations of these groups with the army, the US and other regional and imperialist powers have been dodgy and deceitful, with changing loyalties and affiliations. Their main sources of revenues are extortion, drug running, kidnapping and ransom, and other criminal activities. It is fear that guarantees their booty and hence they are all competing with the state and with each other to see who can carry out more heinous, cruel and inhuman acts of terror.

It is precisely because of this that the multinational companies, and imperialist and regional states, make deals and contracts with them to the advantage of their own financial and strategic policies and interests. Hence their connections with certain sections of the state, that has now vowed to obliterate them, are not so concealed anymore. This operation will not be a straightforward military campaign, as it is difficult to differentiate between friend and foe. After all, this has been the dilemma of the “good” and the “bad” Taliban that has been haunting and convulsing the establishment for decades now. It will be a long and a protracted and internecine war that has very remote chances of reaching any clear and decisive solution or conclusion.

And if this operation fails what will happen then? The political elite are so removed from reality that they can’t even dare to think about it. These billionaires and upstarts are not the ones who are suffering. It is the workers and the poor who are the victims of this fundamentalist onslaught and also of the economic terrorism being inflicted upon them by the system and the ruling classes through their state apparatus. When these toiling masses rise in class war they will have no other option but to do away with this whole edifice of plunder, tyranny, exploitation and terrorism. To accomplish this they will have to carry out a revolutionary insurrection to remove the whole system.