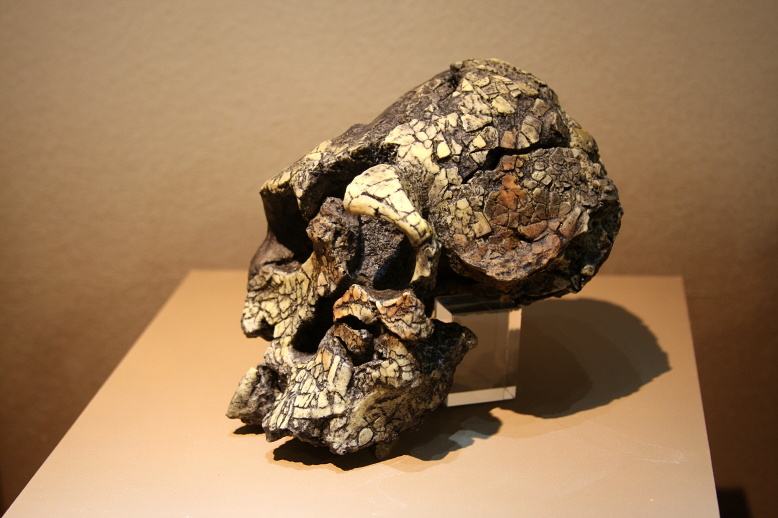 "There is a grandeur in this view of life, with its several powers, having been originally breathed into a few forms or into one; and that, whilst this planet has gone cycling on according to the fixed law of gravity, from so simple a beginning endless forms most beautiful and most wonderful have been, and are being, evolved." (Charles Darwin, The Origin of the Species, pp. 459-60, Penguin 1985.)

The latest discoveries in palaeontology once again reveal the rich and complex evolution of the human species. In March, the magazine 'Nature' reported on a new fossil find in Kenya of a 3.5 million year-old skull. Originally, it was thought that the human linkage had been traced back to an ancestral genus called the Australopithecines (the "Southern Ape"), the most famous remains being 'Lucy', discovered by D.C. Johanson. These proto-humans roamed the savannahs and Rift Valley of Africa more than 3 million years ago, and are closer to modern humans than apes. However, new evidence suggests that the Australopithecus family was not the only hominid species to have existed at this time.

'Nature' describes a new species - Kenanthropus platyops - with a much flatter face than any Australopithecine. "Kenyanthropus shows persuasively that at least two lineages existed as far back as 3.5m years," said Meave Leakey of the Kenya national museum. It is clear that the evolutionary tree is far bushier that at first appeared. While the human lineage split from that of the African apes some 5-10 million years ago, this new evidence suggests possible new lines from which humans evolved. It shows a far greater diversification of human evolution prior to the emergence of the Homo genus.

The newly discovered skull has a small earhole, like those of chimpanzees. However, it shares other features of early hominids, such as a small brain. But there are other striking differences, including tall cheek bones, small teeth and a flat plane beneath its nose bone, giving it a flat face appearance. The flatter face - a feature once thought distinctly human - arises primarily from the way the new species ate its food.

"It seems that between 3.5 and two million years ago there were several human-like species, which were well adapted to life in different environments, although in ways that we have yet to appreciate fully", stated Dr Daniel Lieberman, an anthropologist at George Washington University, Washington.

It is understood that, as with the Australopithecus, the Kenyanthropus also walked upright. The emergence of these bipedal apes was a revolutionary breakthrough in human evolution. What forced these creatures in this direction is likely to have been the climatic changes that swept through the African continent some fifteen million years ago. The transformed geography, driven by the separation of two tectonic plates, running from the Red Sea in the north through Mozambique in the south, saw faulting and uplifting of mountains and the creation of the Great Rift Valley. This transformation caused the forests to shrink and fragment, creating radical changes to the habitat of the ape populations.

"The land to the east of the valley was no place for apes, with its forests rapidly disappearing as rainfall levels diminished", states Richard Leakey and Roger Lewin. "One very persuasive theory for the origin of bipedalism, the feature that established the human family, is that it was an adaption for more efficient locomotion between widely distributed food sources. There are other theories, too, but this one makes good biological sense, given the habitat changes of the time." (The Sixth Extinction, p.88.)

Over a period of several million years, new species arose and others became extinct. The development of hominids with small brains and the ability to walk on two feet represented a qualitative evolutionary leap. In the fossilised river bed in Laetoli in Northern Tanzania are hominid footprints dated at 3.5 and 3.7 million years. In the words of Leakey and Hay: "the Pliocene hominids at Laetoli have achieved a fully upright, bipedal and free striding gait, a major event in the evolution of man which freed the hands for tool-making and eventually led to more sophisticated human activities. Moreover, evidence supplied by cranial parts of the somewhat later but related hominid fossils from the Afar in Ethiopia (dated between 2.6 and 3 million years) indicates that bipedalism outstripped enlargement of the brain. To have resolved this issue is an important step in the study of human evolution, as it has long been the subject of speculation and debate." (Quoted in The Labour Theory of Culture by Charles Woolfson).

In fact it was Frederick Engels who first explained this revolutionary birth of mankind as early as 1876, five years after the appearance of Darwin's 'The Descent of Man', in his brilliant essay 'The Part Played by Labour in the Transition from Ape to Man'. Engels, using the method of dialectical materialism, was able to explain the evolutionary process despite very little fossil evidence. "Labour is the source of all wealth, the economists assert", wrote Engels in its opening lines. "It is this - next to nature, which supplies it with the material that it converts into wealth. But it is also infinitely more than this. It is the primary basic condition for all human existence, and this to such an extent that, in a sense, we have to say that labour created man himself." (The Dialectics of Nature, p.279, Lawrence and Wishart 1946.)

Engels recognised that the erect posture in walking represented "the decisive step in the transition from ape to man." This allowed the hand to be free and could "attain ever greater dexterity and skill". Thus states Engels, "the hand is not only the organ of labour, it is also the product of labour." He then went on to explain that this had further revolutionary consequences. "But the hand did not exist by itself. It was only one member of an entire, highly complex organism. And what benefited the hand, benefited also the whole body it served."

Bipedalism alters the shape of the foot. Upright walking also necessitates a narrower pelvis to hold the guts in position and changes the shape of the birth canal. Unlike in other primates, as a consequence, in humans child birth is a difficult process. With the increased development and size of the brain, selection favouring larger heads, other physical changes also took place. To compensate for larger heads, humans are born at an earlier stage of development than apes. However this meant a greater period of dependency, and a prolonged mother-child relationship, which were to have a dramatic effect on social relations. Humans became, above all else, social animals.

The use and production of tools constituted a further revolutionary leap forward for humankind. The fossil record serves to confirm the suggestion, also made by Darwin, that the use of tools was both the cause and effect of bipedal locomotion. For the hominids evolving towards humans, their way of life depended upon the skills of tool-using and tool-making. According to S.L. Washburn, "The success of the new way of life based on the use of tools changed the selection pressures on many parts of the body, notably the teeth, hands and brain, as well as on the pelvis. But it must be remembered that selection was for the whole way of life."

Development of the brain

Engels brings the whole picture together. "First comes labour", states Engels, "after it, and then side by side with it articulate speech - these were the two essential stimuli under the influence of which the brain of the ape gradually changed into that of man, which for all its similarity to the former is far larger and more perfect. Hand in hand with the development of the brain went the development of its most immediate instruments - the sense organs. Just as the gradual development of speech is inevitably accompanied by a refinement of all the senses."

This view was confirmed by Woolfson, "Human beings can create their own special access through speech and tool-making to an ever widening pool of social information about the problems of subsistence. Tool-making and speech, therefore, could be said to provide the twin foundations for the whole subsequent development of human culture." Woolfson went on to state that "had Engels been alive today he would undoubtedly have greeted the latest scientific data with alacrity... the broad outlines of Engels' theory are, by and large, confirmed by contemporary research, and that in this respect Engels' essay is a brilliant scientific anticipation of what is now thought, by some writers at least, to be the likely pattern of early human evolution."

Engels' materialist viewpoint challenged the existing orthodoxy of the day. The idealist view dominated, which saw the development of brain as the key to the development of man. This false view was carried into the twentieth century, and epitomised by the fraudulent Piltdown man, a skull of a supposedly large-brained ancestor, with an ape-like jaw. "The hoax was accepted for so long because it was exactly what the English scientific establishment had wanted to find", noted Christopher Wills (The Runaway Brain, p. 72.)

Most anthropologists of the day imagined a harmonious gradual transition from ape to man, driven by increased intelligence. "Upright posture is only the consequence of higher development of the brain", wrote the embryologist Karl Ernst von Baer. Fossil evidence would soon provide the "missing link", or so it was thought. However, the accumulation of fossil evidence confirmed Engels' thesis. The Australopithecines walked upright but had small brains! Increasingly, but amid great resistance, a growing number of palaeontologists have come to accept this materialist view.

"Although controversy remains over the precise dating for the first likely emergence of Homo," writes Charles Woolfson, "the evidence suggests that stone-tool making had become a habitual part of a developing human way of life prior to the major cranial expansion and other anatomical developments which have often been taken to mark the emergence of man."

The English scientific establishment in particular was dominated by pragmatism. Rather than recognising evolution as a process encompassing leaps and breaks in continuity, they contented themselves with a vulgar gradualism. Engels sought to challenge this scientific and philosophical orthodoxy, which placed things on their heads. Today, palaeontologists like Stephen Jay Gould and Niles Eldredge have embraced a new dialectical view of evolution, called punctuated equilibrium. Gould has recognised Engels' contribution, describing his essay on human origins as "a brilliant expose." However, notes Gould, it "had no visible impact on Western science." (Ever Since Darwin, p.210)

"All merit for the swift advance of civilisation was ascribed to the mind, to the development and activity of the brain", wrote Engels. "Men became accustomed to explain their actions from their thoughts, instead of from their needs... And so there arose in the course of time that idealistic outlook on the world, has dominated men's minds. It still rules them to such a degree that even the most materialistic natural scientists of the Darwinian school are still unable to form any clear idea of the origin of man, because under that ideological influence they do not recognise the part that has been played therein by labour."

The latest discoveries in this field of human origins is a testimony to Engels thought and contribution, not least the discovery of Kenanthropus platyops. It is a confirmation of the method of dialectical materialism, the only consistent scientific outlook of the world.