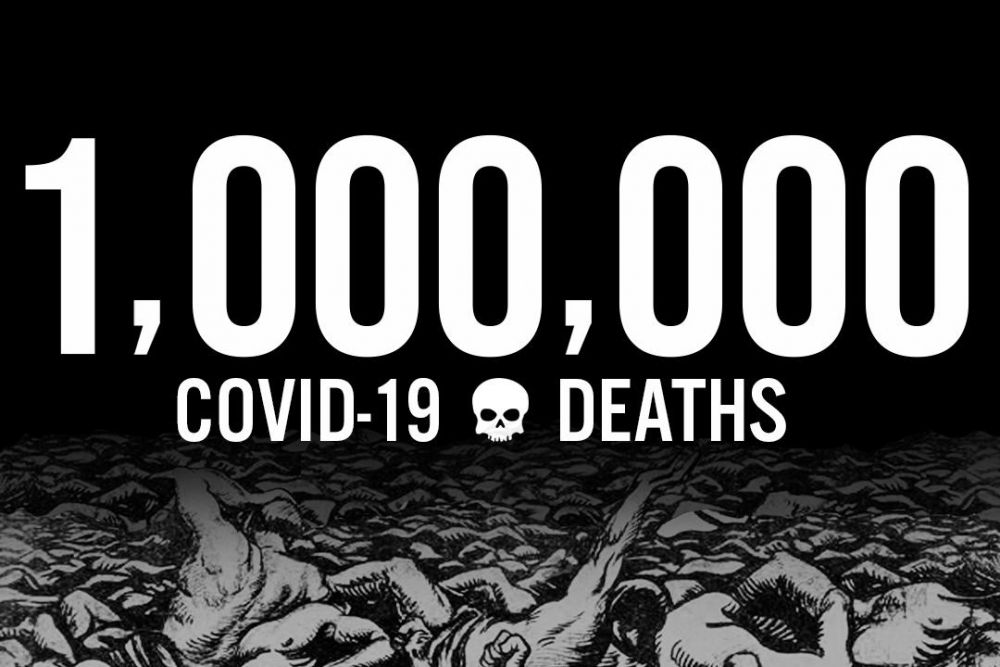 A million lives have officially been claimed by the COVID-19 pandemic. The scale of this tragedy is a direct result of capitalism and its representatives. They have shown a callous disregard for workers, youth and the poor; and their inept attempts to save the system have only created more chaos.

With the advanced capitalist countries facing a second wave – and the first yet to crest in many parts of the world – we can expect COVID-19 to climb further up this grim leaderboard. The Institute for Health Metrics predicts the death toll could double by the end of the pandemic, overtaking the great cholera outbreak at the turn of the 20th century.

The “agonising milestone” of one million dead (to quote UN Secretary-General António Guterres) isn’t even the whole story. As disease specialist Prof. Alan Lopez from the University of Melbourne explains, this figure only applies to deaths “where there was a test and where the death certificate was correctly filled in by a doctor.”

In the poorest parts of the world, with large rural populations and few hospitals, many deaths will have gone unreported. Couple this with “excess mortality” of people with chronic conditions, either aggravated by the coronavirus, or denied treatment due to the additional strain on health services, and the result is “COVID deaths well beyond the million that we see”.

This is not to mention an increased rate of suicides, which in England and Wales for example have hit a two-decade high for men, given the additional psychological pressures of isolation and financial uncertainty.

The full impact of this pandemic knows no closer analogy than the Black Death of the Middle Ages, which sent feudalism to the brink of collapse. Similarly, the coronavirus pandemic has provoked an economic and social crisis (years in the making) that has brought capitalism to its knees.

The IMF warns of “a crisis like no other”, predicting a 3 percent decline in the global economy by the end of the year: the worst fall since the 1930s. Of course, it is the working class and poor who will be expected to shoulder the burden of this calamity. 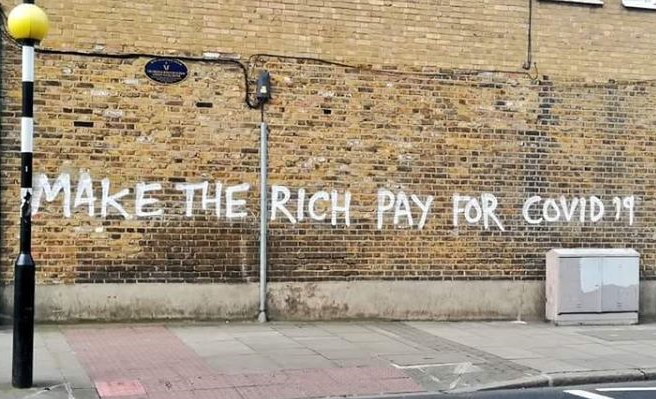 Already, unemployment in the USA has gone from 4 percent before the pandemic to 10 percent. And millions of workers in countries like the UK, France and Italy face the scrapheap as governments move to wind up the furlough and job support schemes keeping them afloat.

Meanwhile, tens of thousands of businesses surviving on the iron lung of state loans in the advanced capitalist countries are about to go bust, contributing to spiralling unemployment, debt and homelessness. And this is aside from the plight of workers in the poorest countries, who lack any sort of social safety net.

Poverty kills, contributing to about a third of global deaths in normal times. And with the UN estimating that 265 million people are threatened with starvation due to the effects of this latest crisis, the pandemic will claim tens of millions of victims besides those who actually succumb to the disease.

The virus has brutally exposed the class lines in society. While the rich ride out the pandemic from the safety of their expensive homes, the working class and poor often don’t have the luxury of self-isolating or working from home. The rich enjoy the best healthcare money can buy, while the poor are forced to rely on overburdened state health services, where these exist, or else spend money they don’t have on hospital bills.

The COVID-19 death rate is twice as high in deprived communities, and within these, oppressed ethnic minorities are hit harder still. And in the poorest parts of the world, the virus has only just got started. In Nigeria, for example, the “poverty capital of the world” with the third-highest rate of infections in Africa, there is no prospect of self-isolation or regular hand washing for the 50 percent of the population who live in cramped, unsanitary slums.

Meanwhile, the likes of Charles Robertson, chief economist at Renaissance Capital, an emerging market investment bank, chime in that poor countries “will have to give up on lockdowns – they just don’t work and they are not worth the economic pain.” Whether or not lockdowns are effective, one imagines Robertson is less concerned with the “pain” of people in poor countries than that of his shareholders, whose ability to leech off these countries will be impeded if their economies totally collapse.

While the working-class and poor face infection, unemployment and poverty, the rich are not only getting by, but actually getting richer. 20,000 Amazon warehouse workers have tested positive for COVID-19, while CEO Jeff Bezos made $13 billion in a single day – more than the GDP of 80 countries.

The elite parasites might be enjoying their spoils for now, but their system is imploding. And their shameless profiteering amidst incalculable suffering is storing up a well of class hatred that will burst to the surface sooner rather than later.

One disaster on another 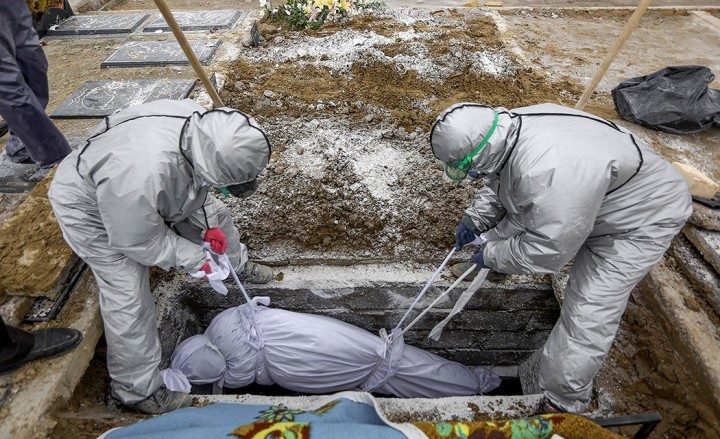 This has been one of the deadliest pandemics in 100 years, and the death toll is still climbing / Image: Behzad Alipour

The USA, Brazil and India account for 450,000 fatalities between them. US President Donald Trump himself recently had a brush with the disease. He emerged today from the Walter Reed medical centre after three days of treatment, bragging that he is “immune”, and bullishly telling Americans “don’t be afraid” of the virus.

“We're going back to work, we're going to be out front,” he declared, before promising that a vaccine would be available “momentarily.”

Of course, Trump got the best treatment available, paid for by the state: unlike the working-class Americans who make up the majority of casualties. He is determined to restore economic normality to get profits flowing again, but irresponsibly using his recovery as ‘proof’ that the virus isn’t dangerous will only encourage its spread.

This lamentable episode came amid a farcical presidential election, in which workers and youth face the option of two evils: four more years of Trump, or establishment stooge Joe Biden.

In Brazil, the reactionary demagogic president Jair Bolsonaro has similarly refused to take the virus seriously, despite contracting it himself. Both he and Trump were reluctant to enact lockdowns and social distancing measures, because of the effect on big business, with the result that the virus ran rampant early on.

The impact has been especially felt amongst poor favela-dwellers and indigenous communities in Brazil, the latter of whom are now trapped between the virus and a new wave of forest fires, following illegal logging by the government-backed timber barons.

Meanwhile, India just passed 100,000 COVID-19 fatalities, and the first wave has not even peaked. Following an abrupt lockdown announcement in March that wreaked havoc on the lives of millions of poor migrant workers, Prime Minister Narendra Modi is blaming the spread of the virus on Muslims returning from mass religious gatherings.

The parlous state of the Indian health service, coupled with a lack of beds in state hospitals, means millions of people are forced to rely on the profiteering vultures in the private medical sector.

In these countries, and throughout the world, the capitalist system is being plunged into a crisis, and a seething cauldron of anger and resentment is building up. The tremendous Black Lives Matter movement, in which 10 percent of the US population took part, and which sent shockwaves globally, is a harbinger of the battles to come. 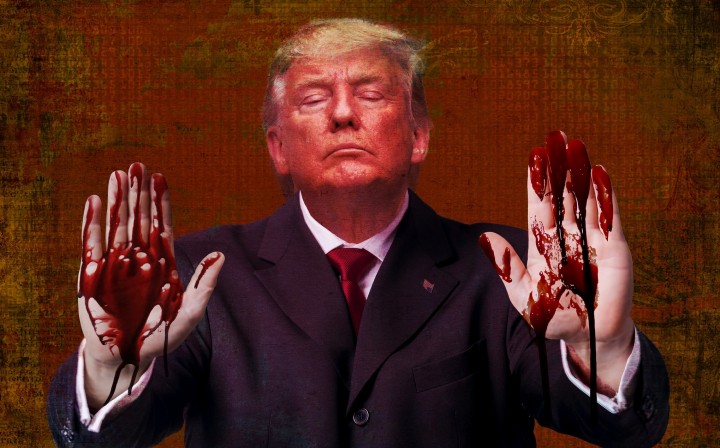 Capitalism and its representatives have blood on their hands / Image: outtacontext, Flickr

As all this chaos unfolds, you might expect a coordinated effort by the world’s top scientists to beat this disease. Instead, we see a rat race by private pharmaceutical companies clamouring to get a vaccine to market – tearing up state regulations and testing requirements along the way.

Their objective is not to save lives, but to secure a patent and rack up profits, while a small number of rich countries buy up more than half the global supply of top candidate vaccines.

As Russia and China roll out experimental drugs, understandable public doubts about the quick turnaround are contributing to a growing sense of confusion and scepticism over the nature of the virus, and the effectiveness of potential vaccines and official containment measures.

This in turn could drag out the pandemic and contribute to even more deaths if people refuse to get vaccinated, or do not maintain proper social distancing. The blame for this situation, born out of frustration, lies squarely with the capitalist class and its representatives, who have proven incapable of responding to the pandemic at every step of the way.

The pandemic is a disaster of capitalism’s making.

The virus was a product of climate change, poverty and reckless production practices. Its rapid spread was a result of governments refusing to suspend production before it was too late. Medical services were ill-equipped to deal with it following years of underinvestment. There has been no coordinated global response due to competition between nation states. And the second wave was exacerbated by the bosses rushing to restore economic activity and get profits flowing again.

Under a socialist planned economy, all of these pitfalls could have been averted and the impact of the virus minimised. As it stands, humanity is at the mercy of a catastrophe capitalism caused, and is incapable of resolving.

The blood of a million people is on the bosses’ hands already. It is imperative that the workers and youth of the world bring down this decrepit system before it is allowed to cause any further damage.