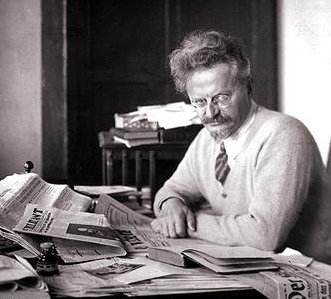 In the good old days when people referred to the crisis of Marxism they had in mind some specific proposition of Marx which had allegedly failed to withstand the test of facts, namely: the theory of the sharpening of the class struggle, the so-called "theory of impoverishment" and the so-called theory of "catastrophic collapse" of capitalism. These three principal points served as the target for bourgeois and reformist criticism. Today it is simply impossible to engage in a controversy over these issues. Who will undertake to prove that social contradictions are not sharpening but rather softening? In the United States, Mr. Ickes, the Secretary of the Interior, and other high dignitaries are compelled to speak openly in their speeches about the fact that "60 families" control the economic life of the nation; on the other hand, the number of unemployed oscillates between ten millions in years of "prosperity" and twenty millions in years of crisis. Those lines in Das Kapital where Marx speaks of the polarisation of capitalist society, the accumulation of wealth at one pole and of poverty at the other — these lines which have been indicted as "demagogic" now simply prove to be a picture of reality.

The old liberal-democratic conception of a gradual and universal rise of prosperity, culture, peace and liberty has suffered decisive and irreparable shipwreck. In its wake, there has been bankrupted the social-reformist conception, which represented in essence only an adaption of the ideas of liberalism to the existing working-class conditions. All these theories and methods had their roots in the epoch of industrial capitalism, the epoch of free trade and competition, that is to say, in the past beyond recall, a time when capitalism was still a relatively progressive system. Capitalism today is reactionary. It cannot be cured. It must be removed.

There is hardly a blockhead remaining who seriously believes (all the Blums do not believe, they lie) that the monstrous sharpening of social contradictions can be overcome by means of parliamentary legislation. Marx has been proved correct in every, yes, every element of his analysis, as well as in his "catastrophic" prognosis. In what then consists the "crisis" of Marxism? Present-day critics do not even bother to frame articulately the question itself.

It will be recorded in the annals of history that capitalism, before sinking into the grave, made a tremendous effort at self-preservation over a protracted historical period. The bourgeoisie does not want to die. It has transformed all the energy inherited by it from the past into a violent convulsion of reaction. This is precisely the period in which we are living.

Force not only conquers but, in its own way, it "convinces". The onset of reaction not only wrecks parties physically, but also decomposes people morally. Many Messrs. Radicals have their hearts in their shoes. Their fright in the face of reaction they translate into the language of immaterial and universal criticism. "Something must be wrong with old theories and methods!" "Marx was mistaken..." "Lenin failed to foresee..." Some even go further. "The revolutionary method has proved itself bankrupt" "The October revolution has led to the most vicious dictatorship of the bureaucracy." But the Great French Revolution also terminated with the restoration of the monarchy. Generally speaking, the universe is poorly built: youth leads to age, birth to death, "all things that are born must perish".

These gentlemen forget with remarkable ease that man has been cutting his path from a semi-simian condition to a harmonious society without any guide; that the task is a difficult one; that for every step or two forward there follows half a step, a step, and sometimes even two steps back. They forget that the path is strewn with the greatest obstacles and that no one has invented or could have invented a secret method whereby an uninterrupted rise on the escalator of history would be rendered secure. Sad to say, Messrs., Rationalists were not invited to a consultation when man was in process of creation and when the conditions of man's development were first taking shape. But generally speaking, this matter is beyond repair...

For argument's sake, let us grant that all previous revolutionary history and, if you please, all history in general is nothing but a chain of mistakes. But what to do about present-day reality? What about the colossal army of permanently unemployed, the pauperised farmers, the general decline of economic levels, the approaching war? The skeptical wiseacres promise us that sometime in the future they will catalogue all the banana peels on which the great revolutionary movements of the past have slipped. But will these gentlemen tell us what to do today, right now?

We would wait in vain for an answer. The terrified rationalist are disarming themselves in the face of reaction, renouncing scientific social thought, surrendering not only material but also moral positions, and depriving themselves of any claim to revolutionary vengeance in the future. Yet the conditions which have prepared the present wave of reaction are extremely unstable, contradictory and ephemeral and they prepare the ground for a new offensive by the proletariat. The leadership of this offensive will justly belong to those whom the rationalist call dogmatists and sectarians. Because "dogmatists" and "sectarians" refuse to renounce the scientific method so long as nobody, absolutely nobody, has proposed anything superior in its place.