On Saturday, 15 October, in the Paradeplatz in Zürich, the heart of the Swiss banking system, over 1500 people met to express their rage against the power of the banks, against the injustice of the system, against the capitalist crisis. Also in the cities of Basel and Geneva smaller demos of between 100 and 400 people were held. 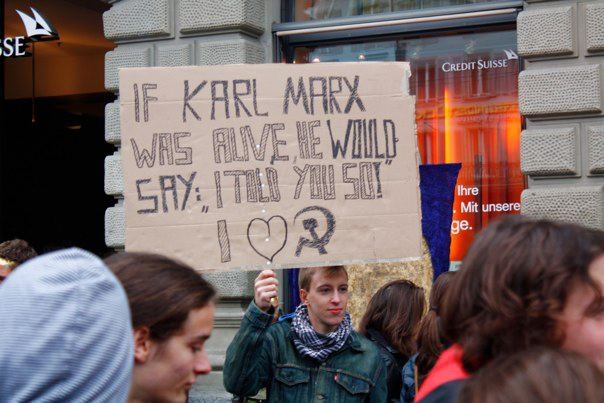 Occupy Paradeplatz was called a week ago at a general assembly where over 70 people participated. A wide range of political activists and groups, such as trade union activists, the socialist youth (JUSO), the Young Greens, etc., took part in the organisation and mobilization. The prominent presence of Occupy Paradeplatz in the media also played a part in mobilising unorganised youth and attracting the sympathy of a wide layer of society.

Surrounded by the two main Swiss banks, UBS and Credit Suisse, a wide variety of people, activists and unorganised, from a broad range of different political backgrounds and ideas (from supporters of Anonymous, to the JUSO, to a group of art students “protecting” the Credit Suisse etc.) came together under the main slogan “Menschen retten, nicht Banken!” – “Save people, not banks!”

The Swiss section of the IMT, Der Funke, was running the only bookstall, which soon became one of the main points of attraction. The wide range of books and papers (about 80 copies of “Der Funke”) being sold, showed that many participants are searching for ideas, for answers to the crisis of capitalism. The fact that the Communist Manifesto sold out after about one hour is a good example of this. Also the Manifesto on the Crisis, which the IMT produced in 2008, and State and Revolution by Lenin, sold out quickly. 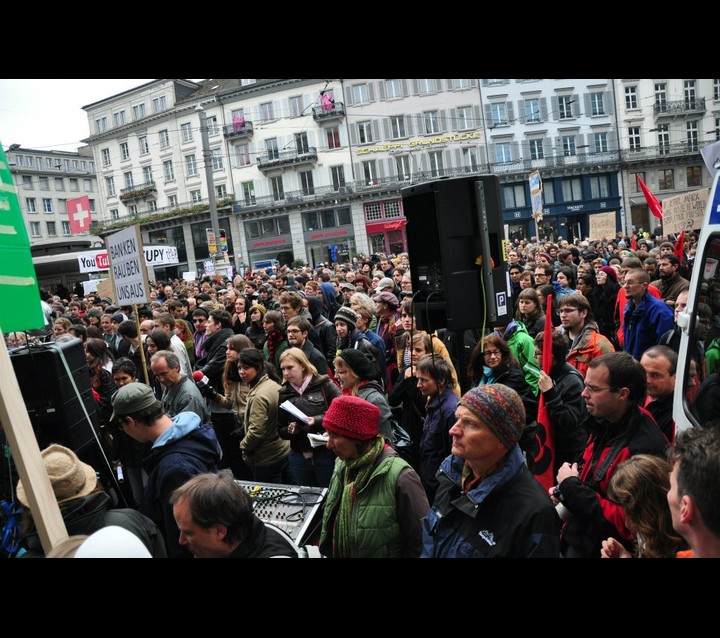 In the afternoon a general assembly was held, where a broad range of different demands and ideas on how to continue with the occupation were presented. The president of the socialist youth (JUSO) pointed out the necessity of nationalising the banks. Jean Ziegler, the prominent left-wing intellectual, made the same point in his “telephone-speech”, where he also called for revolutionary patience.

This protest was inspired not only by the Occupy Wall Street movement but also by the indignados in Spain, by the movements in Greece and the revolution in the Arab world and is an expression of the contradictions of capitalism, that are growing even in a country as “wealthy and stable” as Switzerland. Behind this image of a rich country sitting atop tons of gold and the filthy money of dictators from all over the world, there is ferment. What the Swiss workers have experienced in the last decade has been a stagnation of wages, while at the same time pressure in the workplace has grown and the social services and pensions have been under constant attack. At the same time, the profits and the wealth of the capitalists have multiplied. 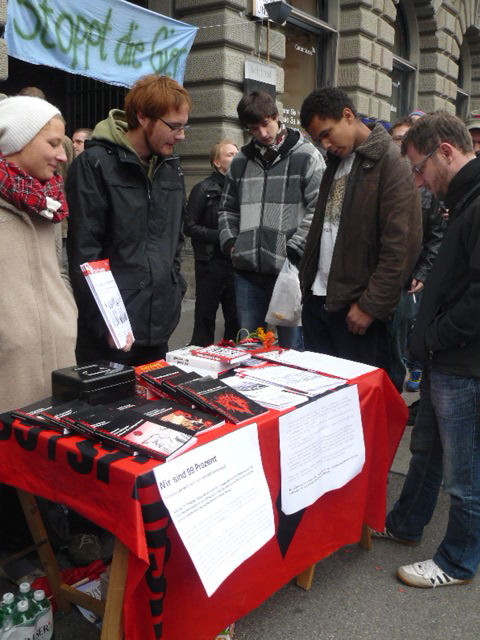 The protests continued until today (Monday 17 October), when activists were still camping on the Paradeplatz. Due to the fact, that there is no organizational committee, it remains unclear how Occupy Paradeplatz will continue. A call for another demo next Saturday is being discussed in the cyber-world. In further assemblies the next steps to be taken will be decided on and made public.