Share
Tweet
On October 13 and 14, sixty representatives of workers from factories that are occupied or in struggle, together with some 40 guests, met in the Parque Central in Caracas in a national gathering organized by Freteco, the Revolutionary Front of Workers in Occupied Factories.

On October 13 and 14, sixty representatives of workers from factories that are occupied or in struggle, together with some 40 guests, met in the Parque Central in Caracas in a national gathering organized by Freteco, the Revolutionary Front of Workers in Occupied Factories.

This meeting is extremely important for the future of the Bolivarian revolution. This can only be completed once Venezuela becomes socialist, and this can only be done on the basis of the expropriation of the capitalist class, the oligarchy and imperialism, which are currently sabotaging the revolution and preparing to prevent the victory of president Chavez in the December 3rd presidential elections. In this sense, the working class must put itself at the head of the movement with a clear socialist programme. The future of the revolution depends on this. 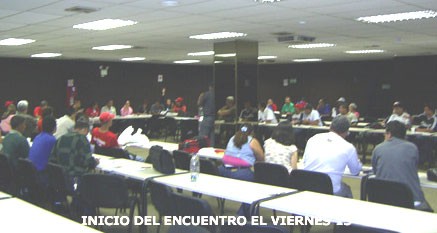 Therefore, the factories that have been taken over and recovered by the workers are currently at the vanguard of the struggle of the working class to win its rightful place at the head of the revolution. The taking over and occupation of factories by the workers and the spreading of this movement throughout the country is the only way to carry out effectively the revolutionary expropriation of the capitalist class.

The workers in recovered companies are aware of the need for the workers to be at the forefront of the battle for 10 million votes in the December elections. This, and the need to coordinate and spread the taking over and occupation of companies were at the center of the debate in the different commissions, and this was the main reason for the National Gathering on October 13 and 14.

Workers from the most important factories occupied or under cogestión in Venezuela attended the meeting, with apologies from comrades in Cumanacoa in Sucre and Laboratorios Gamma in Maracay.

Before the beginning of the meeting, a representative of each one of the factories was called to the presidium. Comrades from Inveval (who had organised the meeting), Invepal Morón, Sideroca, Invetex, Selfex, workers sacked from Invepal Maracay, Franelas Gotcha and Sanitarios Maracay, were together on the stage.

The gathering was officially opened at 6pm by Jorge Paredes, worker and president of Inveval, who welcomed all those present. Amongst the invited guests were representatives from the Ministry of Labour, Julio Barba from the Ministry of Light Industry and Commerce, as well as the former Minister of Environment Ana Elisa Osoria who expressed a keen interest in the struggle of the workers in occupied factories. Also represented were the National Peasant Front Ezequiel Zamora, and the movement of tenants in Caracas which has been fighting for the expropriation of landlords. Very moving greetings were given by a veteran socialist militant from Chile who had been a leader of the "cordones industrials", the soviet-type bodies that emerged during the Chilean revolution in 1970-73. The comrade explained his experiences at that time and compared them with the current Venezuelan Revolution. 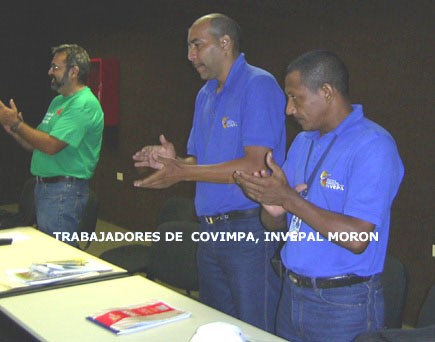 There were also special guests from Cipla, the Brazilian company which has been occupied by its workers for 4 years and which has promoted the movement of occupied factories in Brazil. The Brazilian Council of Occupied Factories, together with Freteco and other workers organizations in Latin America, is organizing a Pan-American Gathering in Defence of Jobs, Industry and land reform, which will take place in Joinville, Santa Catarina, Brazil in December. The aim is bring together more than 500 workers from all over the American continent, from Canada to Argentina.

Jorge Paredes introduced the first point of the agenda, the discussion on workers' control and socialism of the 21st Century. Jorge pointed out that there are reformist and bureaucratic sectors within the revolutionary camp who want a watered down socialism, that is a socialism of the 21st century were the capitalist market and the capitalists are welcomed. Jorge pointed out that this is completely impossible, and that the capitalists have already tried to overthrow president Chavez on a number of occasions and are sabotaging the country's economy.

He mentioned the recent statements by the Minister of Food, in which she explained that the real cause for the deficit of sugar in the country was the refusal by the multinationals and sugar companies to process the sugar cane. This, she had explained, forces the government every year to pay sugar producers millions of bolivars for a crop which will not be processed. 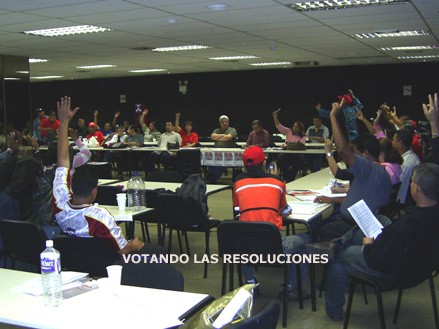 Jorge said that what the Bolivarian government should do is expropriate the multinationals and the sugar capitalists and hand over control of these companies to their workers and the communities, so that the national production of sugar cane could be planned democratically. This is what should be done in the sugar industry and should be replicated in the rest of the country's industries, he added.

Jorge Paredes also mentioned the offensive against cogestión on the part of bureaucratic and capitalist sectors who say that the workers are not capable of exercising control over the factories and try to take them away from them "until they are ready for it".

Jorge replied that the workers are already ready, not only to manage the factories, but also to manage, together with the communities, the country's affairs as a whole. He explained how it was the workers, together with the communities, that defeated the oil sabotage of December 2002, recovering the oil industry and running it against the wishes of the PDVSA bureaucracy and without the help of managers or directors. It was the same case with the recovery of Inveval and Invepal. Without the action of the workers and the communities the government of president Chavez could not have resisted the sabotage because it is precisely the people as a whole that are genuinely interested in the victory of Chavez and the revolution he is leading.

Then the participants went to Carrizal, in the state of Miranda, where Inveval is located, and where the workers of the valve factory, which was recovered by the workers after three years of struggle, had prepared lodging for all of them. As Jenny from Gotcha pointed out, it was very impressive to see how well run and organized the factory was and the extremely warm welcome they all received. 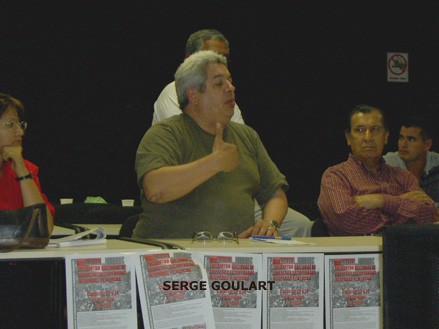 The meeting began on Saturday with two commissions: on the proposals of the workers in occupied factories about the "10 strategic points for the law on cogestión" and another one on the legal statutes for the recovered factories.

The commission on statutes was centered mainly on the debate that is taking place at Inveval about the statutes proposed by MILCO (the Ministry dealing with occupied factories), which they want to impose on the workers of Covimpa (the workers' cooperative which is part-owner of the factory). One of the issues in debate was the need to guarantee workers' control in these companies, and that the workers should have a majority on the Board of Directors, as Chavez himself had proposed at the time of the expropriations of Invepal and Inveval. In the end there was agreement that the statutes being discussed did not guarantee the workers' right of control or the proposal of president Chavez, and that therefore the MILCO proposal should be rejected.

The other commission discussed the "10 strategic points of the law on cogestión". Here there was a lively debate on what model of cogestión should be adopted. The conclusion was that all new companies expropriated by the state should be based on 100% state ownership and should be under workers' control, as part of the struggle for a genuine revolutionary state, not the current one which is inherited from the 4th Republic. It was also stressed that the workers should be fully covered in their wages and social rights by the state.

After the morning debate, the conclusions were reported back to the plenary. This will be published soon together with the rest of the documents of the meeting.

In the afternoon the debate was on "The role of the working class at the forefront of the struggle for 10 million votes", introduced by comrade Nelson, from Inveval. A number of proposals were passed during the debate, including a meeting with president Chavez to present the conclusions of the gathering to him. It was also agreed to organise a sports gathering in Invetex with workers from all occupied factories as a way of lifting the morale of the Invetex workers. These workers can see that the project as promoted by president Chavez in 2005 has been paralysed by the former owner, Miskin, and the reformist bureaucracy. The workers have been excluded from any kind of participation.

It was also agreed to participate in the march that the workers of Invepal are organising for October 21st to defend the project of the factory as promoted originally by the workers and president Chavez, against the attacks on workers and for the defence of their rights and for genuine workers' control.

The Gathering also agreed to participate in and support the march organized by the National Peasant Front "Ezequiel Zamora" on November 20th, for the 10 million votes for president Chavez, for socialism, and for the struggle against landlordism.

At the end of this debate a coordinating committee of the Freteco was elected with two representatives from each one of the factories represented at the gathering.

Pan-American Gathering in Defence of Jobs, Rights and Land Reform in Joinville, Brazil

The last point on the agenda was the presentation on the Pan-American Gathering by Serge Goulart, the coordinator of the occupied factories in Brazil. Serge explained that the meeting will take place on December 8-10, with the aim of coordinating the efforts of the working class across the whole of the continent in defence of their jobs. Serge said that the expected attendance was 550 delegates, including 300 from the occupied factories in Brazil, 150 from Argentina and 40 from Uruguay. It was proposed that Freteco would send 25 delegates from the occupied factories. It was agreed to have a campaign of mass meetings in the factories in order to prepare the Pan-American Gathering and to raise funds to finance the trip to Brazil.

The meeting was closed at about 7pm with all workers and invited guests singing the Venezuelan national anthem. The enthusiasm could be seen in the faces of all those present, since they were all aware of the important step forward the meeting represented for the whole of the Venezuelan working class in the struggle for the socialist transformation of society.