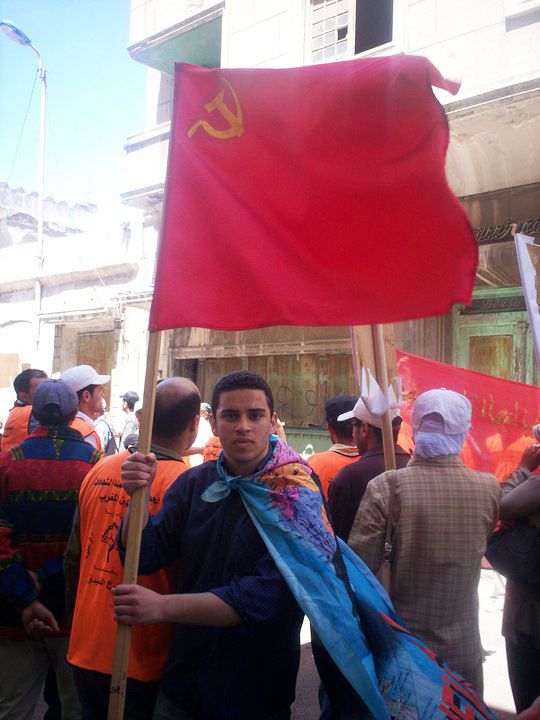 A bright young revolutionary has gone. Anas Benani, alias Yayha Benhamza died in a bus accident Sunday on his way to a football match of his favourite team the ‘Maghreb de Tétouan’. A car accident is rarely an accident on the Moroccan roads. It is probably one of the most predictable things to happen when driving in the country.

The lack of security on the roads cause 4000 deaths yearly. This is as much as in France, which has 15 times more cars! The regime Anas was fighting against with such enthusiasm, is completely unwilling and incapable to really invest in road security. The royal oligarchs prefer to spend billions of Dirham on the high speed train between Tangiers and Casablanca than in a safe network of roads.

Anas joined the first nucleus of young Marxists who later established the Communist League of Action, the Moroccan section of the IMT. Like many of the student youth in Morocco he could not find a job after graduating from university.  He nevertheless found the best of jobs in a restless region, that of youth leader of the 20F movement, completely dedicated to winning and training the new generation of activists in the ideas of Marxism and to building the organisation. This was the meaning of his life. The socialist revolution was the horizon of his life.

What struck me when I first met Anas was his smile. He always smiled. A great generous smile. He was full of life and of confidence in the future. He liked to crack jokes. His sense of humour was a formidable tool of criticism of the dictatorship and of laughter amongst comrades and friends.

Anas was an activist with a great hunger for theory. A few months ago he explained to me his plans for translating Reason in Revolt into Arabic. He understood that you cannot build a solid organisation without a good understanding of philosophy, especially dialectical materialism.

Anas was proud of the small but significant achievements of the Communist League of Action.  Aside from all other interventions in a few years’ time the comrades had written and published approximately five hundred articles on the website (www.marxy.com) and the paper.  In this period the website had received one million visits from all over the region.

Anas had a head but also hands. Those hands he used for making banners, for flyposting, for cleaning the meeting room and also for cooking for the other comrades.

As all young men he was also in love…

One of his last messages on Facebook was on the big workers demonstration in Casablanca this Sunday. Tens of thousands of workers had arrived to the economical capital of the country to demand political and trade union freedom. The working class was finally on the move in Morocco! I can imagine his joy. I can imagine how between two songs of his football team he would be discussing the significance of this demonstration in the bus with other supporters.  He died like he lived so much is sure.

Anas is still with us. As long as his ideas survive he will not die.

His comrades in the International Marxist Tendency and the editorial board of In Defence of Marxism, convey their condolences to Anas' parents, to his sister, his brother in law, his girlfriend and to all the comrades and friends who enjoyed Anas presence and were part of his struggle.