In Obama's State of the Union address, the President called for "national unity." It's definitely in the interest of the people who collect profit off of other people's work to assure us we all share the same set of "American values." They want us to believe we're "all in this together" when really they're parasites living off our sweat. 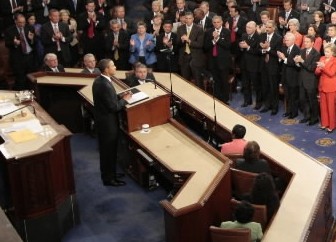 The following is from the end of Obama's first State of the Union address:

In the end, it is our ideals, our values, that built America — values that allowed us to forge a nation made up of immigrants from every corner of the globe, values that drive our citizens still. Every day, Americans meet their responsibilities to their families and their employers. Time and again, they lend a hand to their neighbors and give back to their country. They take pride in their labor, and are generous in spirit. These aren't Republican values or Democratic values they're living by, business values or labor values. They are American values.

Unfortunately, too many of our citizens have lost faith that our biggest institutions — our corporations, our media and, yes, our government — still reflect these same values. Each of these institutions are full of honorable men and women doing important work that helps our country prosper. But each time a CEO rewards himself for failure, or a banker puts the rest of us at risk for his own selfish gain, people's doubts grow. Each time lobbyists game the system or politicians tear each other down instead of lifting this country up, we lose faith. The more that TV pundits reduce serious debates into silly arguments and big issues into sound bites, our citizens turn away.

The above paragraphs sound great at first. Democrat or Republican, boss or employee; we all share the same values, that is, "American values." While it is almost certain many of us simply don't, let's give Obama the benefit of the doubt and entertain the idea. One can certainly imagine that the CEO of a Fortune 500 company could share many personal values with a person who works on the factory floor. They both might value family, friends, God, and so forth. According to Obama, if it wasn't for the "few bad apples" that didn't share these core "American values," our faith would be restored and we would, presumably, go back to living the American dream.

But what does this mean?

Really, it is an unoriginal narrative that could be pulled off the lips of numerous Kings, Emperors, and Presidents alike. No doubt every empire thinks they're different than the last, just as the present always seems to believe it's somehow more distinguished, and learned, than the past. History is told to us as a series of events caused by decisions of individuals. Lincoln freed the slaves. Hitler invaded Poland. Columbus discovered America. Bernie Madoff is the economic crisis. Let's throw him in jail and get back to business as usual. If this is the case, how are we to make any sense of it? Why even bother?

In reality, history isn't just individuals making decisions. It's true, individuals' actions do alter events, but these actions must be put in context with the historical period in which they are taken. Simply put, we can't choose when we're born or how the society that we're born into operates. Any decision we make is bound by the limits of the environment we live in. Even seemingly abstract thoughts are originally an interpretation of the world around us.

Similarly, while the corporate CEO might share some personal values with his or her employees, they're bound by the laws of the economic system they operate under. This places the CEO and the employee directly at odds. By their very nature, corporations must make a profit. Not only that, competition and their shareholders dictate they must make an ever growing amount of profit. This means it's in the interest of the corporation to pay the employee as little as possible. Obviously, this isn't in the interest of the employee. In order to live and function in society, the employee must sell his or her labor power to the corporation (if possible, to the highest bidder). But here's what usually is left unsaid: It's actually the employee's labor power, his or her ability to work, above all else, that creates the profit. Without labor power, there are no factories or machines built or operated. There are no goods, let alone markets to exchange those goods on. Therefore, the workers really hold all the power. In effect, without the workers, there is no society.

This brings me back to Obama's fairy tale. Those two paragraphs are a telling example of whose side Obama really is on. It's definitely in the interest of the people who collect profit off of other people's work to assure us we all share the same set of "American values." They want us to believe we're "all in this together" when really they're parasites living off our sweat. They will gladly sacrifice a few of their own ( the Bernie Madoffs — the "bad apples") in order to keep alive the economic system that favors them. Almost every law they pass is intended to do so as well. This doesn't mean, however, that we workers share anything other than basic human emotions with this section of society. We are, in fact, their historical grave diggers. We have much more in common with workers from any other country in the world than we do with any American CEO.

When all is said and done, it's both the development of industry and technology, and who controls that development, that moves history. Right now industry is controlled by a small group of individuals who use that power to run America (and most of the world) in their interest. They hire elegant speakers like Obama to fill us full of platitudes so we will continue to literally work ourselves to death while they continue their lives of privilege. But just as tribal, slave, and feudal societies passed from the historical scene, so too will capitalism fall and democracy finally enter the realm of economics. But it won't fall automatically. As the recent crisis shows, they will use their State to prop up their dying economic system.

This is why we must organize politically independent of the two parties of business. This is why we need a mass party of labor, based on the unions. Obviously it will take much more than this to build a new society, but that first, historically necessary step of breaking with the Democrats, will have an enormous impact on the consciousness of American workers.

We look forward to the fight.