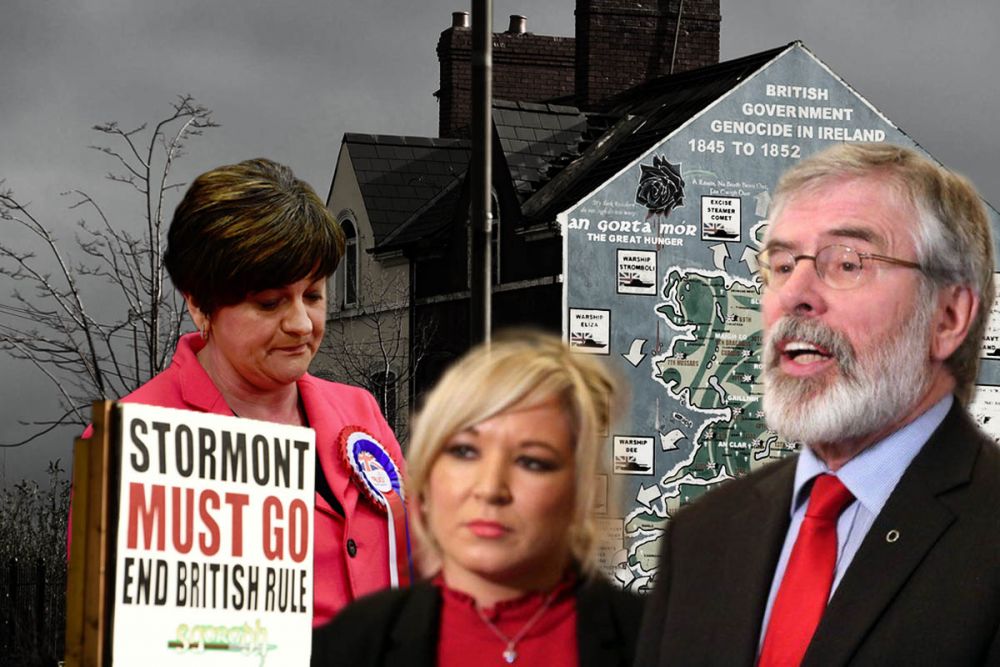 The elections on 2nd March to the Northern Ireland Assembly have served to shatter all of the old certainties enshrined in the sectarian monolith established by the Good Friday Agreement (GFA), now languishing in crisis. The elections have done nothing to shift the political deadlock. Instead they have brought to the surface all of the contradictions in the North, reflected in a sea-change in the balance of forces, with unionism losing its majority for the first time since partition.

Sinn Féin and the DUP have once again topped the polls. Although the DUP is under pressure from Sinn Féin to ditch Arlene Foster as First Minister, it is unlikely that either party would easily leave behind an “arrangement” that has allowed them to dominate their respective communities. However, the contradictions in the North particular within unionism mean that any agreement on power sharing looks more fragile than it has for many years.

The Tories undoubtedly do not want a return to direct rule from London. Likewise neither the DUP nor SF would relish the political fallout from such a move, as they would be fearful of losing control of the situation in the event of direct rule being imposed.

Nevertheless, whilst formally little will change, the results of this election are causing jitters amongst the ruling class. As the Financial Times warns, this election “fits [in with] the pattern of disruptive polls elsewhere, starting last year with the UK’s decision to exit the EU and Donald Trump’s victory in the US. […] The matter needs handling with the utmost care.”

With a massive upturn in the vote for Sinn Féin, and the unionist vote stagnating, for the first time since partition, unionism has lost its majority. In fact, Stormont is now evenly split, with 40 unionist, 40 nationalist, and 10 other MLAs.

What these elections reveal is a decisive shift in the political mood in the North of Ireland – laying bare the complete impasse facing the Establishment as a whole, and unionism as the ideology of the protestant bourgeoisie in particular. Whilst the DUP remains the biggest party in the Assembly, with 28 seats, Sinn Féin is now only a whisker behind it with 27. In fact, Sinn Féin were little more than 1,100 votes away from emerging as the biggest party in Stormont. When the North of Ireland was carved out of the body of Ireland by British imperialism, it was always assumed that unionism would have a permanent majority. That old certainty, along with a thousand other long-held certainties, has now been shattered in the context of a deepening crisis of the regime.

As we have explained in previous articles, the crisis of the Establishment in the North of Ireland reflects the broader crisis of capitalism. As long as the Good Friday Agreement ensured peace and political stability, and the boom of capitalism meant that at least a few crumbs could be cast down to the working class, the political setup in the North of Ireland could enjoy a modicum of stability. Now, however, the cupboard is bare, with the North dependent more on public sector jobs than any other region of the UK and thus being harder hit by austerity. Furthermore, Brexit has completely destabilised the political situation.

The proverbial “straw that broke the camel’s back” was the scandal engulfing the Renewable Heating Initiative (RHI), which we have analysed elsewhere. Exposed and with nothing else to offer, the DUP and its leader, Arlene Foster, a key architect of the RHI, have increasingly taken on a belligerent and hard-line sectarian stance to scare unionist communities into falling in line behind them. Their entire campaign was tinged with ugly fear-mongering. The unionist electorate were warned that  a vote for anyone other than the DUP would only aid Sinn Féin and Gerry Adam’s “radical agenda”. Meanwhile, the nationalist community were likened to “crocodiles”, who would only come back for more if granted their modest demand for equal treatment of the Irish language.

Whilst to a large extent the vote of the DUP held up, the biggest loser was the formerly dominant Ulster Unionist Party (UUP), which utterly collapsed. As we are seeing all around the world, the so called “centre-ground” is crumbling (as hard as it is to imagine the UUP as the “centre ground”, given its history); it was a flight of fancy on the part of the UUP to imagine that it would be about to make a comeback. The other side of the DUP’s belligerence, meanwhile, was – as Gerry Adams pointed out – “to radicalise young people for Sinn Féin”.

The nationalist vote rocketed in the campaign, with an overall turnout of 65%, the highest turnout in any Assembly election excepting 1998. The irony is that in the context of widespread disgust at the politicians at Stormont – and in an atmosphere described as “somewhere between apathy and anger” – the sectarian rules of the game at Stormont and the absence of any clear working class alternative have led to the entrenchment of the parties that were in government together only yesterday.

It is the height of irony that after decades of armed struggle, and now decades of a “Peace Process” that is locked into a sectarian blind alley, the leaders of the biggest Republican and Unionist parties are locked into an Assembly that has little more control over the future of the North than organising the bin collections and school meals. Deep underlying contradictions are bursting to the surface over issues like the RHI scandal; meanwhile, children go hungry, parents and young people lie idle without work, and the once powerful Northern economy rots away amid talk of Brexit and hard borders.

Besides Arlene Foster’s inadvertent efforts as a recruiting sergeant for Sinn Féin, a key driving force behind the sudden political shift, which looms over everything else, is the question of Brexit. What that means for the North of Ireland and the future of Britain’s relationship with Ireland in general remains hazy – but some things are becoming abundantly clear. Although neither the Irish nor the British ruling classes have any interest in the establishment of a hard border, it is looking increasingly impossible to square the circle of a North of Ireland outside and a South inside the common market, without some kind of hard border separating the two.

Politicians and commentators are writhing and squirming at how this might be implemented: perhaps a “virtual” border could be established? Others have suggested having customs checks 10 miles from the border to maintain the illusion of open borders. Such “solutions” would be laughable in any other circumstances.

The impact to trade would be devastating and the lives of those living near the border would become insufferable. Decades of integration will be cut across as the free flow of people and goods ends overnight. We can add to this the numerous other economic effects of Brexit, such as the cutting off of EU money (which the North of Ireland is a net recipient of); the collapse of the pound; and a thousand and one other affects. Ominously, some have even warned of checkpoints becoming bomb targets for dissident Republican groups, thus posing the need for British troops to guard them, with all of the implications that that would have. There is no appetite for a return to the bloodshed of the past in the North of Ireland, but the growing acuteness of the crisis of capitalism hangs like a malignant shadow over the future.

These elections mark a watershed moment in the decline of unionism. Having lost its historic majority, with Sinn Féin on the rise, and with British capitalism mired in crisis, the question is bound to be posed sooner or later of a border poll. With Brexit negotiations about to kick off, and the North of Ireland being excluded from the negotiating table, feelings of national imposition are likely to be exacerbated. With Sinn Féin’s stock rising in the South due to the policies of vicious austerity being pursued by the main parties, its hand is only likely to be strengthened if and when it makes the call for such a poll.

Continued union with Britain clearly offers nothing but further austerity, and political and social instability. Nevertheless, we must state that Irish capitalism is in no better health, and unification on a capitalist basis will not solve the bread and butter questions that underpin the national question. The existence of the Frankenstein’s monster of sectarianism, Connolly’s “Carnival of reaction”, stands blocking the road towards a united Ireland. It subsists today on the same foundations of want and misery that capitalism creates in abundance, and will prove insuperable until the working class is united on a clear class basis.

Only by attacking the root of the problem – the capitalist system – can we unite the working class around common interests. Today, more than ever, a party of the working class, organised on revolutionary, socialist principles, is needed. The crisis of unionism illustrates this point in sharp relief. Only on this basis can we lay the basis for a real solution: a 32 County Socialist, United Ireland, linked by voluntary federation to a socialist Scotland, England and Wales, as part of a Socialist United States of Europe.