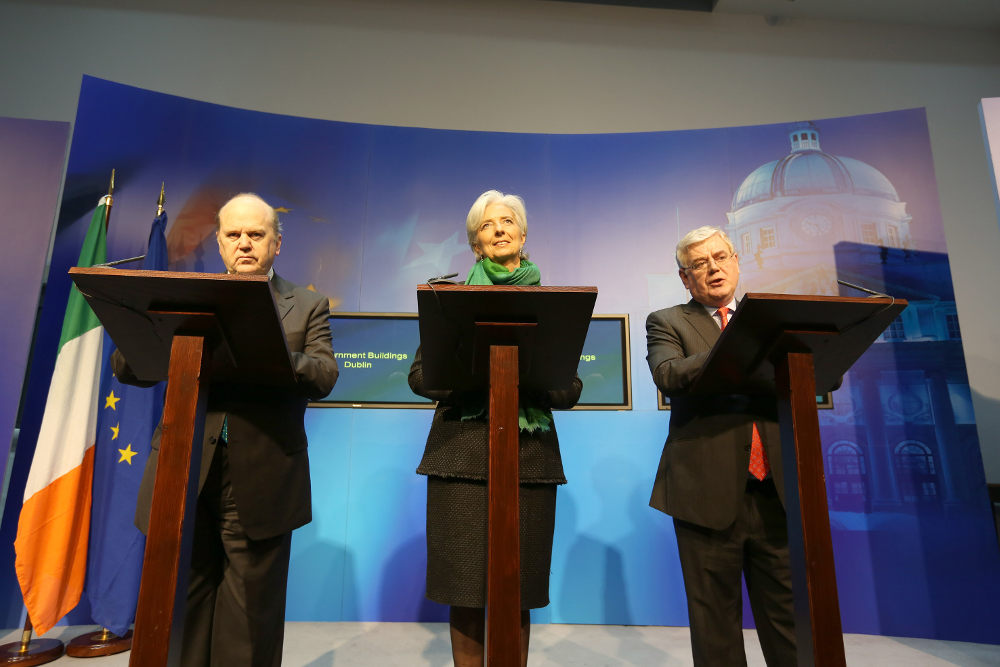 Despite some jostling for position between the Fine Gael back benchers and Labour TD’s, Michael Noonan’s forthcoming Budget is set to add yet more pressure and hardship on hard pressed families across the state. The troika target of €3.1 billion in cuts and tax increases represents some €677 for every man, woman and child in the state.  Fine Gael TD’s are arguing for more and Noonan himself has said that “the next budget will be tough”. Since 2008 the total amount of cuts has hit €28.1bn; around €5,000 per head.

In the front line of the austerity will most likely be the social welfare budget, this currently comprises €20.26bn or some 40% of the total state budget. Of this figure €5.3bn is paid out as old age pensions. Already reports in the press indicate that the coalition might be looking to cut pensions by around €10 per week; all this to save an estimated €250m. Already some 115,000 families with 207,000 children are in receipt of grants from the Back to School Clothing and Footwear Allowance. This reflects the crisis affecting families.  Health and Education, especially so called “non core teaching staff” are likely to be hard hit. Cuts in third level education funding are also anticipated.

Despite debt repayments the state finances are still in a bad state, reflecting the underlying sluggishness in the economy. The latest projection for Irish economic growth in 2013 is just 0.7%. This is against a background of a marked decline in economic activity since 2011. Doubtless then as in every budget since the outbreak of the crisis the working class and the poor, sick and the vulnerable will be made to pay. It is evident that after 5 years of austerity the crisis shows very little signs of abating. As Fightback has explained on many occasions, this is no ordinary economic “adjustment”, it is an organic crisis of the system itself.

So how do the Irish bourgeoisie intend to get out of the mess? What can we say about the prospects for inward investment in the state and exports? After all, these are factors that played an important part in the Celtic Tiger years.

There are some 1004 foreign owned companies in Ireland with a turnover of some €110bn employing some 146,000 people. The majority of these are US firms. But given poor trade conditions, there is little prospect of a big investment boom. The biggest boom in foreign investment in Ireland seems to be a direct result of low corporate taxation. As Finfacts explains:

Services exports managed to grow by just under 3% in the first six months of the year, which was a sharp contraction from the 9% growth last year - - about 40% of services exports are fake and related to tax strategies of foreign firms.” (Finfacts 8/8/2013 Irish Economy 2013: Ireland's export trade contracted again in second quarter)

As we have explained previously, the relationship between the Irish bourgeoisie and the Irish state and the big transnational companies is a very unequal one. Socialist Voice the Communist Party of Ireland’s publication recently carried an article analyzing the character of the Irish bourgeois and made the following observation:

A domestic big bourgeois class has emerged in agri-food, in manufacturing, in construction, whose interests are international as well as national, who are both domestic and global players. However, alone they are not strong enough to rule the economy or to guarantee their growth and reproduction. So, they also require the active support of both European and American monopoly capital. Therefore they are the ruling class domestically but also a dependent class in relation to foreign monopoly capital: they are both a ruling class and a dependent class. This is the nature of a peripheral state whose development has never been free and independent.

This big bourgeoisie will act to shape and mould the Irish economy and society to suit their needs. They will crush or subsume small business and both the petty and middle bourgeoisie to maintain their dominance and to relegate democracy and workers’ rights to merely a necessary evil where required. (Socialist Voice July 2013)

US and European capital will continue to use and abuse the Irish state and in particular Irish workers. The state is particularly vulnerable to world trade conditions and is limited by the size of its internal market. The prospect of a return to the levels of investment seen during the early years of the 21st Century is remote.

Export markets also are weak. The Irish economy depends heavily on exports. Most significantly 57% of agri-food exports and 64% of exports are with the EU and the Eurozone is still in crisis. That hasn’t stopped Eamon Gilmore from making wild claims about the prospects for the Irish economy.  Gilmore’s claim that exporting to China represents the key to economic recovery doesn’t really stand up to much scrutiny. While Chinese imports rose last month after a period of stagnation they represent a tiny proportion of Irish exports.

“Eamon Gilmore, minister of foreign affairs and trade, and tánaiste is in China this week leading a trade mission and he said in an interview in Beijing that China is key to Irish economic recovery. The claim is absurd as exports to China in 2012 accounted for about 2% of the headline value 0f total exports.

“China is a priority market for Ireland and strengthening our relations with China is critical to our exporters and to our economic recovery as a whole,” Gilmore said, according to an Irish Times report.

“China is an important market and it's important for Ireland to have good relations with the country.

“However, for Irish indigenous exporters, its relevance is in niche areas. This amounted to about €200m in 2012.” (Finfacts 31/7/2013 Gilmore says China key to Irish recovery; Exports at 2% of total)

The recent slowdown in Chinese economic growth over the last 2 consecutive sectors combined with a broader trend of slowdown across the ‘BRICs’, with Russia, India and Brazil especially all experiencing slower growth and in the latter moves towards stagnation belie this “export” led strategy. (BBC 15/7/2013 China's economic growth at 7.5% in April to June period)

In a press release dated the 30/7/2013 the Irish Exporters Association argued that:

“A further year of austere budget measures is required to maximise competitiveness and address Government operating costs. However, it must be stated by Minister Noonan when issuing Budget 2014 that this will be the last year of austerity budgets.  Such a statement will send a very strong message and give confidence to workers, business owners, executives and investors.  It will allow for future planning and will give confidence to investors as to what return they can expect for investment in enterprise, particularly export enterprise. The IEA also called on the Minister to confirm that the pension levy will be abolished at the end of 2014, as promised.”

This call reflects the stark fact that Irish exports are in decline, as the Eurozone economies continue in crisis. There seems little opportunity for the breaking out of a new economic boom.  As the following report from Finfacts illustrates the exports of merchandise goods has fallen by 6.4% in the past year.

“Irish Economy 2013: Ireland's export trade contracted again in the second quarter of the year, reducing first half year exports by 2%. The contraction brought exports for the six months to €88.6bn, down €1.7bn on the same period last year, according to an estimate by the Irish Exporters Association.

“The merchandise exports contracted by €2.9bn or 6.4%, mainly due to the loss in the value of pharmaceutical exports associated with the end of their patent protection on a range of block buster drugs manufactured in Ireland. However, amid the general fall in manufacturing exports, the agri-food and drinks sector continued on its growth path and increased export sales by a strong 8%.” (Finfacts 8/8/2013 Irish Economy 2013: Ireland's export trade contracted again in second quarter)

Unemployment in the state remains chronically high. While the overall figure for the live register has fallen by some 18,000 since July last year, almost half of this fall 8,171 to be precise comes from a fall in under 25’s. Emigration figures from 2012 indicate that some 35,800 young people aged 15 – 24 had emigrated in the previous 12 months. Considering that many 15 - 17 year olds in Education would not appear in the Live Register it is evident that youth migration has made a huge contribution to the so called drop in unemployment.

The talk from the Labour leaders last year about an end to austerity being in sight have been demonstrated to be little more than hot air. Unfortunately the response of the Irish left in the main has been to turn towards Keynesian solutions. Yet while the economy remains in crisis there can only be “reformism without reforms”. Only a struggle which directs itself against the capitalist system itself, both in Ireland and in connection with a wider European and international struggle can solve these contradictions. There has never been a more important moment than now for the development of a revolutionary Marxist Tendency in Ireland based on the ideas of Marx, Lenin Trotsky and of course James Connolly.