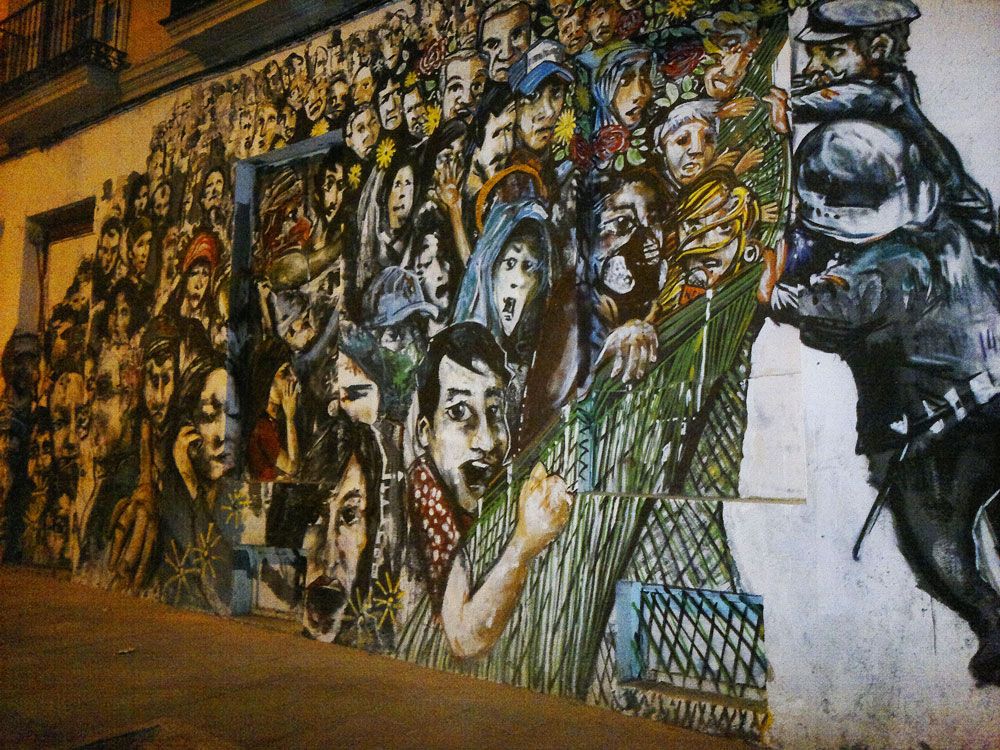 We have received the following report from a Spanish comrade living in Edinburgh, Julia S. Vidania, on her recent visit to her home city of Madrid. She gives a vivid account of the almost revolutionary tension in the city as the European austerity programme and the crisis of capitalism erodes the veneer of stability in society, exposing the deep fault-lines of the class struggle. We strongly recommend this well written account which is full of detail and insights.

Wandering the streets of Madrid has always been one of the greatest pleasures in my life. A city of such beauty with so much to offer, where the sound of a Spanish guitar is never too far away, closely followed by the smells of amazing food and the sound of a thousand lives coming from all around you. A city that never sleeps.··It’s weird how far away it seems from here and how easy it is not to think beyond the downgrading banking rates and the alarming figures of unemployment. In Scotland it almost feels as if those things could never reach us in the safety of our home in the North. In Madrid it used to feel that way too.

From the minute I stepped off the plane I noticed it straight away. It was electrifying. It was on everyone’s mind: the crisis, at all levels: economic, political and social. All around me the conversations revolved around the cuts and the despairing situation of the same people who used to call themselves the middle class. It was surprising in itself to hear people talking about politics and economics and demanding solutions everywhere I went to in a country where talking politics was avoided for decades because it was not ‘politically correct’. No one seems now afraid of hurting anyone else’s feelings when it comes to defend the rights for which the Spaniards have fought and bled for generations. The vast majority of the population supports recent protests and strikes against the brutal package of austerity measures introduced by the right-wing PP government of Mariano Rajoy, and millions of people turn to the streets every month in massive demonstrations such as never remembered in living memory. From all around the country tens of thousands of workers travel to Madrid to crowd the city with banners and chants demanding the resignation of the newly elected government and the election of a new and representative government, that of the people. The numbers are so large that the media, exposed to the increasing criticism from the people, do not even bother on giving figures anymore. The working class has awakened in the city that never sleeps.·

Anti government grafitiThe Spanish state, as expected, has responded to this awakening with extreme violence and repression. Madrid seemed to me a city under siege, reminding me a bit too much of a police state. The police creep about the city in their cars with the lights on, moving slower than slowly, watching… and being watched. The feeling you get in every street corner is unsettling, the police car creeping up the street while dozens of people, young and not so young, watch following the car with their gaze as the city holds its breath. Policemen do not seem comfortable either, never abandoning the safety of their car and appearing as intimidating as they possibly can. If you were wondering, they are also armed.·

However, the three main police trade unions (CEP, UFP and SPP) expressed their rejection of the austerity measures introduced by the government, which included salary cuts for public sector workers by 5% in 2010, the freezing of their salaries in 2011, 2012 and 2013 and the cancellation of bonuses in Christmas as well as a cut to their holidays. In a press release published in the SPP’s website on the 1st of October the trade unions emphatically accused the government of using the police for their own benefit and of “extending the violence and forcing police intervention”. In addition, the two main associations of the Spanish army (AUME and Soldiers for Democracy) also publicly rejected the actions of the government and claimed that “they were running out of patience” and supporting “every social initiative that defends the civil rights which we must not lose”. This, added to the massive increasing figures of unemployment (23% and over 53% of young people), the brutal reform to the labour law, cut downs to salaries and public spending and the increase of the VAT to 21%, make the situation in Spain volatile at best. The anger is already boiling within the very structures of the state. And the feeling one gets wandering the streets of Madrid is that the state has raised itself up from society in order to repress the wave of anger streaming across the country, meanwhile trying to protect themselves by clinging to the very structures that are already shaking. In Madrid, the ones who are not running out of patience are running out of money and the government of Rajoy is running out of time.·

Unsurprisingly, the Spanish media is publicly displaying their lack of criticism and understanding, and even of information, which should be the main priority of the so-called information media. This is also very unsurprising given the fact that hundreds of journalists and other media workers have been replaced by the government for more suitable ones. In Valencia, a group of about a hundred workers from public TV stormed in the live broadcasting of the daily news to protest against the labour reform that has sacked 75% of the workers affecting to over 1,295 people. For up to 7 minutes, people around Valencia enjoyed a live taking over by the workers, joining to the demands of the rest of the population. The police did of course “enforce the order”, and the public ended up enjoying a documentary about marine environments instead,··in another pathetic attempt at censorship that characterises our shaking government and that reminds so much of old censorships in the not-so-old fascism.

Unfortunately for the comrades reading, I did not have the pleasure of marching with the hundreds of thousands who took the streets of Madrid on September 15, when the main Spanish trade unions CCOO and UGT, along with other sector unions, called for a demonstration against the ironically called Popular Party. I would have probably been amongst the black wave of angry civil servants, out of the six colours that crowded the city each representing a body of the public sector (education green, healthcare white, public services black, trade union rights red, social services orange and abortion rights violet). Interestingly, workers dress in their colours on Fridays, reminding the city that the struggle goes on. And in response to the massive display of the police force I might have imitated many and might have carried my ID on the mouth.·

M15 demonstrationI had the chance, though, to march myself in October 13, along with other thousands of people in a demonstration called by the movement M15. The protest, which was supposed to start at Neptuno Square in the city centre and finish in Sol Square, was intentionally moved to the tricky entrails of the city far away from Sol Square and many protesters received misguided information. Fortunately, the weather in Madrid was as nice as usual at this time of the year, and hundreds waited for the protest on the way to Sol by meanwhile starting another protest. I wandered the streets of Madrid once again under a banner for economic sovereignty and joined my voice to that of the thousands of workers, students, young and old who just like me have spare bills at the end of their salary, and spent the rest of the evening enjoying the carnivalesque sound of a good Spanish protest.·

A week before that, another protest had been called by the union CCOO. I hear that there is a similar demonstration called most every week and in the end of the day people need a rest, even when the city doesn’t. I ended up having an interesting conversation about how the M15 movement does not support trade unions. This is an old argument that some are trying to polish, about the legitimacy of the leadership of the trade unions and therefore the rejection of the whole trade unionising. But from what I can gather, there is an enormous bottom up pressure within the unions demanding actions, which already forced the trade unions to call for a general strike in March 29, and which has this time forced to join the general strikes already announced by Greece and Portugal on November the 14th. Furthermore, there are already talks amongst the union delegates to organise an indefinite general strike. The city is busy.

The government is afraid and the upper class is distressed. Politically, they have lost legitimacy before the eyes of the workers. Hundreds of thousands shout for the government’s resignation and a call for new elections, a reform in the justice system and the cancellation of the Spanish debt. The main opposition however, the so-called socialist PSOE, does not pose a huge threat to the governing PP. After nearly 8 years of PSOE’s government, which started with progressive reforms such as the legalisation of gay marriage and abortion, the effects of the housing bubble burst shook the country to the ground. The economic situation of the country was such that the government was forced to resign prematurely and new elections were called. The PSOE has not recovered from the blow it suffered in the elections, and the main left wing opposition in Spain, United Left, has been the beneficiary of such an electoral force. The party is strong in many parts of Spain. Meanwhile the bourgeoisie in other parts of Spain are toying with their national aspirations, and the political climate in Spain is making Prime Minister Rajoy’s nights very long. Instability is bad for business, and the economic panorama is not looking good. Of course it is all about maintaining private property, and so Rajoy has no choice but to play the game of capital. His government has to enforce the economic conditions of the capitalists in order survive and the sham of the democracy that used to protect them from the people has vanished. This is perhaps why the PSOE has been supporting reforms and being quite otherwise. You do not want to be responsible of the present situation in our lovely country. Socially, the tension is breath-taking. The scattered left is trying to hold on together through the unions and social campaigns. The situation is so extreme that Red Cross has launched a campaign to help the thousands of Spaniards living in poverty.

There is a need for a consistent, firm and revolutionary programme, able to unite the masses of workers against the capitalist system. The ground in which to grow the seeds of revolution must be social, the means political and the results economic. As Marxists, we understand the need of strong links to the working class and the work the comrades back in Spain are doing is excellent. It is important to maintain a solid position against the ever tempting reformists on the left. We must penetrate the unions and the workplaces, proud Marxist workers and students able to handle the “whys?” and “hows?” of socialism. In Spain, things are moving fast and the radicalisation of the people is going apace. The fragile government will eventually have to confront a full wave of Mediterranean temper as will their counterparts in Portugal and Greece. People are turning to and radicalising the left and we must be prepared for what has yet to come. The inherent crisis of capitalism is never too far away from our doorstep. It is militant times ahead for us workers of the world.