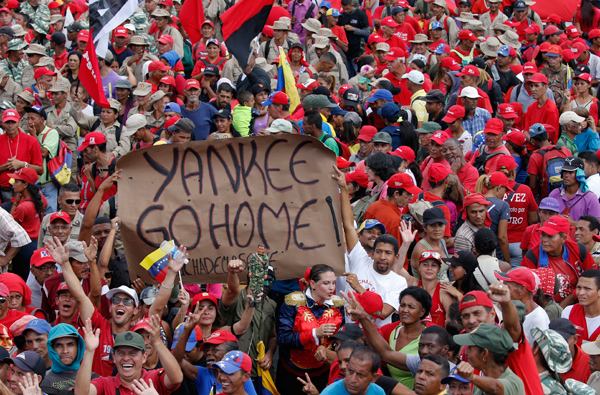 In the last few days, there has been a dangerous escalation in Washington’s threats and provocations against Venezuela. The US Department of Justice indicted president Maduro and other Venezuelan officials on trumped up charges of narco trafficking, among other things. This was backed up by the US Department of State offering rewards of up to 15 million USD for “information leading to the arrest” of those indicted. Immediately, US president Trump announced it was sending warships to the Caribbean, off the coast of Venezuela, with the aim of fighting “drug smuggling”.

At the same time, US special envoy for Venezuela Elliot Abrams and US Secretary of State Mike Pompeo announced a “democratic transition framework” for Venezuela, the first point of which would be the removal of president Maduro from office.

Let us be clear: this is the continuation of the “regime change” attempt which started in January 2019 with the self-proclamation of Juan Guaidó as “president in charge”, backed by the US. For six months, Washington used all means at their disposal to remove the government of president Maduro: diplomatic bullying, media demonisation, sanctions, oil embargo, military coup, threats of military invasion, provocations at the border. They failed. President Maduro is still in power. Juan Guaidó is discredited, marred by corruption allegations from his own camp and tainted with links with Colombian narco trafficking gangs.

Now, in an election year in which Trump is facing the consequences of his appalling handling of the COVID-19 epidemic and a deep economic recession, he decides to escalate the threats against Venezuela, as a distraction from his home policy failures.

The idea that this has anything to do with “fighting drug trafficking” is preposterous. According to the US Department of Drug Enforcement, 92 percent of cocaine seized in the US is produced in Colombia, and 93 percent of the cocaine that arrives in the US from South America travels through the Mexico-Central American corridor, with only 6-7 percent travelling through the Caribbean corridor. It begs the question of why is Washington focusing on Venezuela, instead of focusing on Duque’s government in Colombia and the Central America-Eastern Pacific corridor for its military bravado. 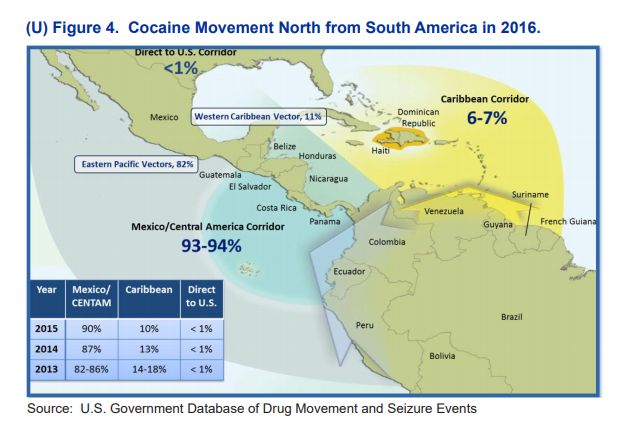 The idea that the threats have anything to do with “fighting drug trafficking” is preposterous / Image: U.S. Government Database of Drug Movement and Seizure Events

If, at the best of times, economic sanctions are illegal and cost lives, maintaining them in the middle of a major worldwide health crisis when they impair the ability of governments like those of Venezuela and Cuba from obtaining the necessary resources to fight COVID-19 is plain criminal. In its vindictiveness, the US is even blocking Venezuelan government efforts to repatriate Venezuelan citizens living in the US who now wish to go back to their country.

Hands off Venezuela: no threats, no sanctions!