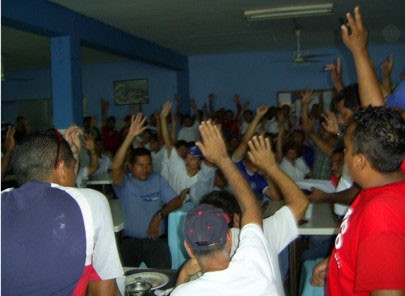 As part of the campaign against the Bolivarian Revolution and President Chavez, the owner of Sanitarios Maracay has announced the closure of the factory. The workers, in defence of their jobs and the revolution, have occupied the factory and demanding that the Bolivarian government nationalise it under workers'control.

In their offensive against the Venezuelan people, the workers and President Chavez the capitalists are trying to strike a blow against the revolution. On November 14, the owner of Sanitarios Maracay announced the closure of the company. This situation is part of the continuous attempts of the boss to break the organisation of the workers and trample their rights over the past few years. 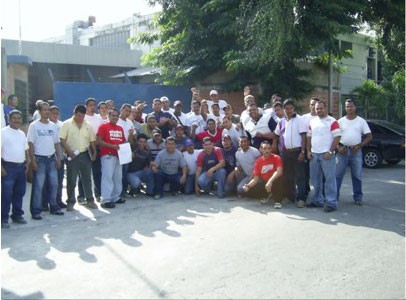 After taking strike action for 15 days in December 2005 to fight for the payment of their "utilities" ("utilities" in Venezuela are benefits paid to the workers to help cover the cost of transport, etc. to and from work), the 800 workers at Sanitarios Maracay broke the intransigence of the owner and received the payment of their benefits. In March 2006 the workers called for the cancellation of 19 clauses in their collective agreement. The main reason was the implementation of health and safety regulations, such as the wearing of boots and uniforms, etc. As a result of this protest the owner abandoned the factory. The workers occupied the factory for 42 days, looking after the installation and maintaining production. The workers got the boss to commit to paying the wages for 32 of the 42 days, for uniforms and to commit to fulfilling the rest of the demands. These commitments were never fulfilled, despite the fact that they were agreed upon and officially signed at the office of the labour inspectorate in Caracas.

Since then the owner began to sabotage the operations of the factory. The plant was only functioning at 40% of its capacity and there was a systematic delay in the payment for holiday pay, wages and benefits. The workers were given paid time off so that they did not have to be at the plant.

Throughout this time the owner was deceiving the workers and their families by making them believe that an investor would be found so that the plant could return to full production.

All of these promises collapsed on November 14 when management notified the leadership of the trade union that the plant would be closed indefinitely, leaving 800 families in Maracay without wages and benefits. All of this just one day before the cancellation of the "utilities", smashing the hopes of the workers that they would receive encouraging news about the payment of "utilities".

The boss sent a letter to the trade union from a meeting in Caracas notifying them of the closure of the factory (while in the plant in Maracay the workers were already being given the letter without the knowledge of the leadership of the trade union). The letter also contained a series of conditions for a discussion on the return to work and the opening of the factory at some indefinite point in the future.

The proposals of the boss are outrageous, and is in fact an attempt to blackmail the 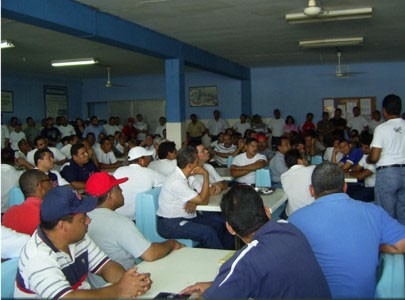 workers of Sanitarios Maracay. For these conditions to be accepted means to abandon the gains made from the years of struggle of the workers and the systematic violation of the national constitution. The boss refuses to recognize any debts owed to the workers, wishes to destroy the collective bargaining agreement and substitute it with individual hiring and contracts, and wants the workers to accept 200,000 bolivars in exchange for all of the acquired rights they will no longer receive. What is more, the boss wants to deny the rehiring of sacked or laid off workers, and wishes to trim the rights of the union which are recognised in the constitution.

At the end of the letter the boss cynically appealed to the solidarity of the workers, to the commitment to their families, and asked them to make sacrifices to get out of this situation.

The workers of Sanitarios Maracay have been making sacrifices for 47 years. For years they have worked for low wages, under the worst working conditions and in poor health: more than 150 workers suffer from hernias and back problems. For 47 years the boss, Alvaro Pocaterra has been making money and doing business in 16 countries on the back of the health and sweat of the workers of Sanitarios Maracay. In payment for these 47 years of service, he throws the workers to live on the streets and leaves thousands of families defenceless in the state of Aragua.

In his letter the boss also blamed the union for the closing of the factory. This is absolutely scandalous. Pocaterra would like to go back to having a bosses' union which would not defend the workers and which would in fact be an instrument to exploit them. This ended years ago with the coming to power of Chavez. The workers have formed a union which genuinely defends their interests.

The owner of Sanitarios Maracay is closely linked to the executioner of the people, Carlos Andres Perez. Pocaterra supported the coup and during the bosses' lockout in 2002 threw the workers to the streets for 63 days. During the Recall Referendum on August 15, 2004, he threatened the workers by saying that if Chavez lost he was going to prevent the tradeÂ union from entering the factory, and in fact kick it out of the factory.

All of the manoeuvres of this coup supporter against the workers, and against the revolution, against Commandante Chavez, were in vain. In the first place he not been able to smash the trade union since the large majority of workers continue to firmly support the policies of the union leadership.

The workers of Sanitarios Maracay have said "Enough is Enough" and that they will not take anymore from this oligarch who exploits the workers and the people and who threatens the revolution and conspires to overthrow the President of the Republic.

The closing of this factory did not fall from the sky: its form a part of the opposition and imperialist campaign in the lead up to the elections on December 3, when Chavez will win. The oligarchy wishes to create chaos and instability in the country, before, during, and after the election! We will not allow this!

The revolution must be defended against its enemies, and we must prevent them from being able to attack the people. The workers of Sanitarios Maracay, in a mass assembly of the workforce, have decided to follow the advice of Commandante Chavez - Factory closed, factory occupied!

On November 14 the workers, in a mass assembly, have decided to defend their rights against the closing of the factory. Unanimously, the workers have decided to occupy the factory and maintain production to defend their jobs and to assist the endogenous economic development of the country against the policies of the capitalists - to improve the living conditions of all Venezuelans and to prevent the counter-revolution from profiteering on the backs of the people as Pocaterra did for 47 years.

How can a factory that produces toilets for homes be closed when there is 1.8 million without homes in Venezuela, when the workers and the communities require a life of quality and dignity? The production at Sanitarios Maracay (and of all Venezuelan industry) must be for the satisfaction of social necessities, and not for wealth of the capitalists at the expense of the people.

Sanitarios Maracay's production must be for new homes and connected to the housing plans of the Bolivarian government. The capitalists cannot continue to sabotage the revolution, closing factories, and forcing the workers and the people to give up necessities.

The Bolivarian government, and President Chavez cannot allow this new sabotage of the country. Sanitarios Maracay must be nationalised under the control of the workers to allow the development in Venezuela of a socialist economy, democratically planned by the workers and the communities.

To this end we make an appeal for solidarity to the workers, the unions of the UNT, to the communities and to the revolutionary government to put an end to this attack on the revolution, to this sabotage of socialism and to the endogenous development advocated by the President of the Republic, Hugo Chavez Frias.