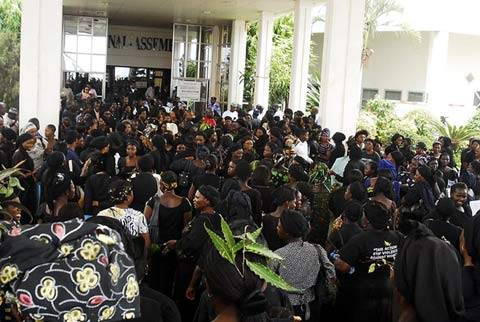 Over the weekend of March 6-7, hundreds of people, including many women and children, were butchered like animals in ethnic conflicts near the city of Jos in Nigeria. This is not the first time such ethnic strife has erupted. It is a symptom of the decay of Nigerian society under the rule of a parasitic local bourgeoisie at the service of imperialism.

Plateau State, of which Jos is the capital, has long been known as "The Home of Peace and Tourism." It has unspoiled savannas, wild animals like leopards and hippos, waterfalls and curious rock outcroppings. But this monicker [nickname - Ed.] is now a sad irony. Since September 2001 when over 1000 people were killed, Jos has been thrown into an abattoir where human beings have replaced cows. Human heads litter the nooks and crannies of many villages in Jos. The killers refused to spare the babies and the pregnant women butchered like wild bulls. In the March 2010 massacre, a two year old boy had his two eyes plucked out, his legs severed from his body, and he eventually died of unbearable pain. But what could his offence have been?

This spate of violence has been presented as one of ethnic conflict or as religious disturbances, but behind these massacres we see a “failing state” that is no longer capable of protecting its own citizens, a state that has impoverished its citizens and transformed Jos, which was once a hub for tin mining, into an impoverished town. Jos which was once a bright and prosperous town is now better described as a mere “big village”.

Jos grew rapidly after the British discovered vast tin deposits in the vicinity. Both tin and columbite were extensively mined in the area up until the 1960s. By 1943, tin mining on the Jos Plateau was at its peak. There were 80,000 African, mainly immigrants, working in the mines. Up to 1960, Jos was the sixth largest producer of tin in the world. This was transported by railway to both Port Harcourt and Lagos on the coast, then exported from those ports. Jos is in fact still often referred to as "Tin City". Tin mining has led to the influx of migrants, mostly Hausas, Igbos, Yorubas, and also some Europeans, who constitute more than half of the population of Jos. This "melting pot" of race, ethnicity and religion makes Jos one of the most cosmopolitan cities in Nigeria. That is why Plateau State is became known in Nigeria as the "home of peace and tourism".

Location of Jos in Nigeria The wealth made from tin extraction was never re-invested locally. A few Nigerians became rich as a result of this business; the biggest share of this easy money went to the Royal Niger Company which monopolized this industry. [The Royal Niger Company was a mercantile company chartered by the British government in the nineteenth century, which was used as the basis for colonising Nigeria in a similar manner to how the British East India Company was used in India]. The income was siphoned off to western nations, mainly Britain. The local bourgeois were also lavishly spending the proceeds without any concern for future community development.

By the 1970s, the industry was already slowing down. The Nigerian economy was starting to be dominated by oil towards the mid-1970s and other export goods like coal, tin, palm oil, etc., were almost completely neglected. This decline continued until what used to be a prosperous Jos became just an administrative centre of Plateau State. Many jobs were destroyed and civil service jobs became the most secured and most sought-after jobs in Jos. Many who could not get government jobs in the ministries went to remote villages to start farming.

Thus, enlightened Jos indigenes became rural dwellers. Consequently, tension started mounting among the various ethnic groups who previously had peacefully lived side by side. The different ethnic groups started competing for the limited available vacancies in the ministries. As could be expected, the indigenes went down memory lane only to discover that the Yorubas came from Ogbomosho and that Igbos are Easterners. As tension ceaselessly mounted in the towns, a lot more tension was brewing in the villages over the question of land. This impending catastrophe was immediately channelled to the political advantage of the ruling elites of Jos. They played one tribe off against the other to maintain their political influence. Religious leaders equally exploit the situation to their own advantages.

This mounting tension reached its peak in September 2001 when over 1000 people were killed, this was the last straw that broke the camel’s back. Just like magic, effect became cause and cause became effect. What was primary transformed into the secondary and secondary became primary. Instead of arresting the religious leaders who had fomented the conflict, they were appeased to help “solve” the problem; and the ruling local elites were approached to help manage their thugs and this further strengthened their political hold.

Instead of dealing with the root cause which is extreme poverty and the absolute destruction of the social fabric that had held the community together for decades, they started beating about the bush. In the middle of this futile experiment by the Nigerian ruling class, another convulsion of violence erupted in 2004, in which 700 people were killed. More than 300 residents died during a similar upheaval in 2008. Now, instead of talk of peace, there is talk of more revenge and of pre-emptive attacks. The people of The Home of Peace and Tourism wait in terror for the next frenzy of violence.

We saw how coal mining was ruined in the city of Enugu known in the past as “Coal City” – but also how the agricultural sector in Enugu State was completely neglected. In fact, Enugu State, which was once self-sufficient in agricultural produce and a net exporter, now has to import food. Similarly at the root of the Jos crisis is the complete collapse of the Tin industry and other wealth producing businesses which were once the life wire of this once prosperous town. 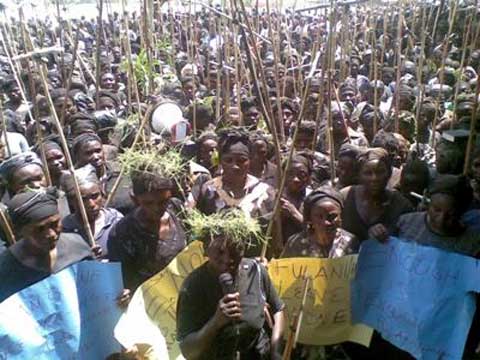 Women protesting in Jos. And rather than moving in the direction of solving the problem in Jos, the Nigerian ruling class is fast advancing towards a direct exacerbation of the crisis. They insist on deregulation which will obviously impoverish the people; they cut social spending, thereby starving schools of funds; they destroy the healthcare system by neglecting it. They continue selling off our collective properties and many workers in these para-statal companies are being laid off. These measures being taken by the Nigerian ruling class rather than solving the problem, will create more cases like Jos in other parts of the country.

Continuing to place hopes in the Nigerian ruling class to help curtail the crisis in Jos will only postpone the evil day. Women have already shown the way, with more than 50,000 women protesting round the major streets of Jos. This protesting crowd consisted of all the ethnic groups in Jos. Both Christians and Muslims were involved in this protest march. This shows that the ordinary working people know instinctively what is required. It is a very good step in the right direction. This should be followed by another thunderous march of all civilized, advanced and right thinking people of Jos; and this protest should be led by the working class through its mass organisations, the Nigerian Labour Congress and Trade Union Congress. What is also required is a workers’ armed defence force to be immediately setup under the direct control of the NLC and TUC for self-defence in the working class and poor neighbourhoods and for the maintenance of peace in the whole of Jos metropolis.

However, we also have to understand that this can only serve as a temporary measure. As long as Nigeria is under the control of this thieving, inefficient, mafia-like and inept ruling class there can never be a permanent solution to the crisis in Jos. They must be overthrown and the wealth of the working people used in the interest of the working people. Under capitalism, there is no alternative to the killings in Jos. Socialism remains the only consistent and viable alternative to the devastation being wrought in the land. Trotsky said over 100 years ago: “Humanity is faced with two options; either socialism or barbarism”. Jos is presently witnessing barbarism and the only respite is a socialist Nigeria.

Ethnic conflicts in Nigeria - Only the working class can offer a way out, by Workers' Alternative, 17 July 2002

Miss World pageant highlights terrible conditions of masses in Nigeria - Only the Nigerian working class can offer a way out of this nightmare, by Fred Weston, 2 December 2002