In an article featured in The Times newspaper yesterday sees former Tory chancellor Lord Nigel Lawson calls for Britain to exit the European Union. This adds to the mounting pressure on Prime Minister David Cameron, and it reveals the deep rifts developing within the Tory party at all levels. 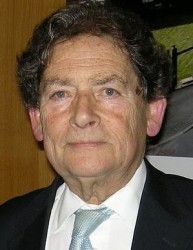 Lord Nigel Lawson former Chancellor of the ExchequerLord Lawson’s comments come on the back of a round of disastrous results in last week’s local council elections. The Tories (Conservative Party) lost 335 seats in the mainly rural constituencies in which these elections were held, and losing control of 10 councils in total. In contrast, the Labour Party gained 291 councillors and control of two local councils.

The biggest media headlines, however, went to the UK Independence Party (UKIP) which gained 23% of the vote, only marginally behind the Tories on 25% and Labour on 29%. The vote for UKIP, a party whose main demandis  a UK exit from the EU, was drawn largely from disaffected Tory voters, with 60% having previously voted Tory. This has given ammunition to the right-wing of the Tories, who are increasingly dissatisfied with the performance of their party leadership in coalition.

Lord Lawson’s comments represent the views of a number of Tory MPs who the Prime Minister sought to keep quiet at the beginning of the present parliament. The task of carrying out the biggest austerity programme in British history, in a tentative partnership with the pro-EU Liberal Democrats, meant that the most right-wing rabid elements inside the Tory party were asked to rein in their more anachronistic and nationalistic sentiments in the name of party unity.

However, with market demand and investment, combined with the cuts, the British economy is at best stagnating. Real incomes have fallen 10% since the beginning of the crisis, according to governor of the Bank of England, Mervyn King. In 2012 twenty stores closed every day in the UK, and 2013 is expected to exceed this number. While families are set to lose £891 a year in benefit cuts which subsidise low wages, David Cameron has given £100,000 in tax cuts to 13,000 millionaires. So far this year two credit rating agencies have downgraded Britain’s prized AAA status, effectively blowing a hole in Chancellor Osborne’s strategy.

It is becoming clear to many Tory MPs that making working class people pay for the crisis whilst the rich laugh their way to the bank means annihilation at the next general elections in 2015. This was demonstrated in no unclear terms last week when the Tories got smashed electorally, not in the working class areas where you would expect, but in their traditional countryside strongholds.

That defeat is causing panic within the party ranks. Tory backbenchers realise that their comfortable shire seats, with their fat parliamentary pay packets and all the expense accounts and privileges that go with the job, are seriously under threat at the next general election. There is no longer such a thing as a “safe” Tory seat.

The problem is that the only logical response to the crisis for the capitalists is to put an ever greater burden onto the backs of the workers and the middle class. But this strategy is not working, and is provoking a public backlash. The recent death of Margaret Thatcher allowed some of the most reactionary Tories a momentary escape down memory lane as they basked in triumphs past. But the attempted glorification of the Thatcher years was also an opportunity to deliver a message to the Prime Minister: “Back to Thatcherism!” Enter Lord Lawson, Thatcher’s former Chancellor.

Smelling blood after last week’s electoral humiliation, Lawson has stepped forward to speak for the Tory rabble. In demagogic language his article states that the European Union had been successful in “containing German militarism”, but now the process has gone too far and that we are walking into the creation of a “European super-state.” In reality Germany dominates Europe, whilst Britain is increasingly isolated.

The real aim of Lord Lawson is to appeal not only disgruntled Tories now voting UKIP, but also to the dissatisfied ranks of the Tory party. Seeking to capitalise on the crisis in the Eurozone, he says that Britain is becoming "increasingly marginalised" in the EU, and is now "doomed to being consistently outvoted by the Eurozone bloc." But hasn’t this always been the case? Why raise this question now? Admittedly Tory Eurosceptic Tories have raised this for years, but Lord Lawson voted in favour for British European membership in the 1970s. It goes to show that while the economy was going forward and all the European capitalists were recording profits, they could get along. Now, in a period of deep crisis, the situation is quite different.

Lawson and other Tories of his ilk still harbour illusions that Britain is a mighty imperialist power which can throw its weight around on the world stage. Britain is becoming a third-rate power. Today the British army is to be cut to a smaller size than it was in the Napoleonic wars. The number of submarines in Britain has been reduced from 27 (1990) to 7. Destroyers and Frigates have been reduced from 69 (1977) to 19 today. This decline in power was one of the key reasons for joining the EU,  after the loss of empire and the exclusive monopoly on trade with the colonies that went with it. It is the decline of British capitalism, presided over by the British capitalists and their Tory representatives, which necessitated EU membership.

In spite of the crisis in the Eurozone, almost half of UK exports go to the Eurozone, which go unhindered by trade tariffs as long as Britain remains inside the European Union. Lawson’s argument is that Britain’s exit would mean the repatriation of powers lost to the “undemocratic” European Union, giving the British government complete control over any further attacks on wages and conditions, unfettered by possible interference by European bureaucrats. Despite British workers being the most exploited in Europe in terms of hours, wages and conditions, Lord Lawson understand that this isn’t sufficient to boost profits and attract investment. But while British corporations currently sit on £700bn pounds of uninvested cash, Lord Lawson entices us with the prospect of saving £8 billion in EU contributions every year!

The timing and content of Lord Lawson’s comments, an elder statesman in the Tory party, only goes to show the barren lack of foresight that exists among the representatives of British capitalism.

In the scramble to save their skins, a struggle is taking place inside the Tory party with the Thatcherite right-wing scoring some recent successes on the back of the coalition’s poor economic performance. The article in The Times today only reveals the latest episode of this struggle.

The problem for the bosses is that the coalition is stuck between a rock and a hard place. The reason why they were only able to take power by the skin of their teeth - through a shotgun marriage with the pro-EU Lib Dems - is because no enthusiasm existed in 2010 for a Tory government, such was the legacy of Thatcherism. Now, in order to appease their core support, the right-wing is pushing harder for a Euro-exit policy. They won’t achieve these aims at this point. The more sober-headed strategists of capital, despite the crisis of the Eurozone, cannot envisage a Britain cut off from its main export market. Such an exit would also accelerate the disintegration of the EU, aggravating the capitalist crisis on a world scale.

Yet, at some point this is inevitable. The present crisis is, quite contrary to the best intentions of the capitalist class, pitting all the nations of Europe against each other. The EU is riven with its own internal contradictions independent of British capitalism’s control and is breaking apart. In this way Lawson may yet get what he wants.

For the working class, inside our outside of the EU makes no fundamental difference. Capitalism is coming for its pound of flesh in the EU, in Britain, in the USA, and throughout the world. Lawson’s comments may rouse the Tory backbenchers, but will do little to prevent the collapse in support for the Tory party.

In response, Labour must adopt socialist policies to fight the cuts, and answer any attempted plays on anti-European chauvinism with a programme of international working class solidarity. No to the bosses Europe! Yes to a Socialist United States of Europe!

Lord Lawson’s comments serve to highlight the cracks and fissures opening up in the Tories, which will impact on the coalition itself. This could put the coalition at risk. Given this prospect it is likely that they will choose to “hang together” rather than “hang separately.” But hang they will at the next general election.