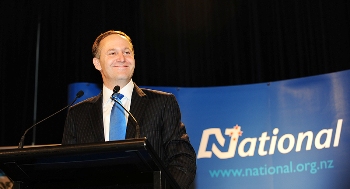 September 20, 2014 was a bad day for the working class of New Zealand. For the workers the re-election of a National government – and for the first time under MMP with an absolute majority – does not bode well for the future of workers’ living standards and conditions of employment, as well as the poor.

As Marxists it is our job to explain what has happened and why. National’s supporters turned out in force and voted for them as you would expect, while Labour supporters voted reluctantly or abstained. In fact the 2014 general election will go down as another historic low turn-out. It isn't surprising to note that more didn't turn out to vote than all the party votes that Labour and the Greens secured!

Labour's tactic of attempting to organisationally get people out to vote who have given up voting (i.e. traditional left voters) was correct. However, the problem that Labour failed to address was a political one. Labour offered only minor reforms that had to be delivered within the constraints of capitalism and not affect the profits of the capitalist. Therefore if you accept the logic of capitalism you end up carrying out its programme in its death agony: i.e. austerity.

National implemented, in its own way, many of Labour's minor reforms before the election, whist ignoring any that may not be directly to the liking of the capitalists, such as a capital gains tax. This approach helped secure National a third term on the government benches.

Labour's right wing complained that the Nats were stealing Labour's policies! However, National didn't steal one policy. There was the raising of the age of entitlement to superannuation (state pension) to 67. This was a disastrous policy for Labour; that Labour's right had railroaded through the party conference eager to appease bourgeois commentators and organisations such as the OECD and IMF.

Let’s be clear about this: workers do not want to work longer before they retire. Workers already work some of the longest hours in the OECD. The argument about living longer surely is a good thing not a bad thing; but workers fully understand that they may not be able to work past 65 effectively. The argument of pension affordability is a capitalist one.

It also hasn't gone unnoticed in New Zealand that the rich are getting richer, as the recent Oxfam report points out. It is that the capitalists no longer wish to pay for pensions or other pro-worker reforms as they see it as undermining their profitability in the future. Capitalism does not have any meaningful reforms to give in its death agony if it is to deliver super-profits to the capitalists. It must be remembered that profit is the unpaid labour of the workers. That is why austerity is on the order of the day across the globe.

Therefore National neutralised Labour's efforts to get voters to turn out, by once again saying that they would not raise the age of superannuation and, to be honest, it was a vote winner as the poll proved! It was so effective that the Labour turnout was the lowest since 1922. National ended up with 61 seats, Labour with 32 seats, the Greens with 13 seats, New Zealand First with 11 seats, the Maori Party with 2 seats and United Future and ACT with one seat each.

There were some, particularly Laila Harre of the Internet Party, who blamed the right-wing bias of the media. Although it is true the media in New Zealand is biased towards National this has always been the case so it's hardly anything new. The reason why Mana/Internet Party lost Te Tai Tikerau to Labour and representation in parliament was because in the eyes of many workers Hone Harawira had sold out by doing a deal with Kim Dotcom's Internet Party. Maori workers did not like the fact that the Mana Party had "gotten into bed" with a German capitalist who bankrolled Mana/Internet's campaign. Maori workers were astute enough to understand that Hone had carried out the same tactic that the Maori Party had done when they signed up to the National government six years ago and "gotten into bed" with the class enemy. Ironically this tactic that gave birth to the Mana Party also has signed its death certificate. This tactic was completely opportunistic and backfired spectacularly along with Dotcom's killer revelations about John Key one week out from the election which further galvanised National voters to go and vote!

Other right-wing commentators have viewed it as a rejection of so-called “cloth-cap unionism” within the Labour Party. The power of the unions within the Labour Party has been weakened since the 1990s as anti-union legislation has knee-capped the power of the unions that have seen their membership rates plummet and subsequently their influence in the party. The Labour Party right-wing dominates the party's leadership hierarchy and the manifesto was theirs. The standard tactic of media spokespeople within political parties these days is to blame poor election results on the inability of their political party to get the message out there, but as King Lear from Shakespeare's play of the same name said, “Nothing comes from nothing.” It is impossible to sell a message if there is no message to sell.

During the election the Labour Party's slogan was “Vote Positive” but there was no substance behind it. Labour failed to grasp the extent to which voters are fed up with the way things are in New Zealand and the disillusionment with the whole political system, especially among workers and the poorest sectors of society. At a time when the working class and the poor were looking for political parties that would offer policies that would make a real difference to their situation the Labour Party had nothing but token gestures to offer. Even the Greens, who have never claimed to be socialist, offered policies that appeared more “socialist” than Labour – not that these policies would stand up to any serious scrutiny.

If the result has produced one positive thing is that it proves that Labour cannot continue to offer token social democratic reforms within the confines of capitalism to the working class and the poor. It must offer genuine socialist policies. It is now time for Labour to embrace its working class socialist origins if it is to survive as a credible alternative to the National Party.

The recently announced Labour leadership contest is a chance for the rank and file to assert itself and stamp its authority on the Labour Party leadership. Socialist Appeal (NZ) urges all members to reject any leadership candidate's call for a move to the right and vote for a candidate that wishes to move the party to the left.

If you wish to join us in the fight for socialism please send us an email at socialist.appeal.nz@gmail.com