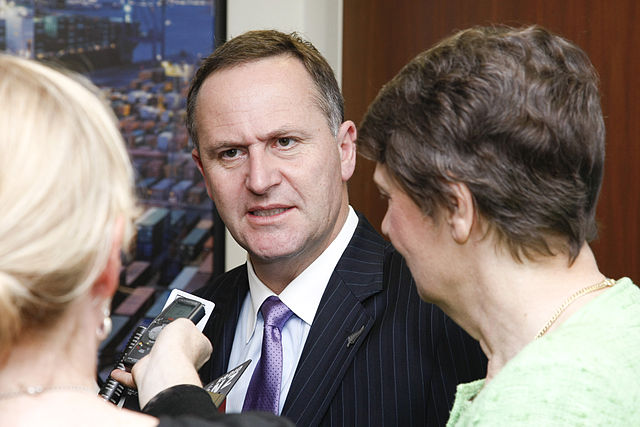 John Key has announced that he his standing down as Prime Minister on 12th December. This has sent shock waves through the National Party. He stated family reasons and getting out whilst he is ahead. These reasons are flimsy ones and bear no serious scrutiny.

With the election of Trump in America and the Trans Pacific Partnership now in tatters, along with Brexit etc, even John Key understands that his golden run is coming to an end. The economic chickens are coming home to roost. Economic uncertainty is rising as the capitalist globalised economy heads to towards rising protectionism and an economic slump. Alongside this is a domestic economy propped up by growing indebtedness, a property bubble and significant economic growth based on rebuilding earthquake ravaged Christchurch and now the top of the South Island too. This is the basis of the National Party's economic credentials. Hardly an economic recipe to instill confidence in New Zealand capitalism!

John Key's political shallowness and vanity is also at play here. As an example of his political legacy and vanity he his on the record has being upset that he was thwarted by the public in the flag referendum to replace the New Zealand Blue Ensign with a “colour by numbers” corporate flag that was on offer. Fundamentally, John Key has decided to bail before he his pushed. The one thing that is certain is that the next World economic downturn will effect New Zealand badly and the perceived economic competencies of the National Party will be in tatters. John Key has seen the economic iceberg approaching the National Party ship and he has gone to get in a lifeboat before it hits.

The right-wing media and international bourgeois leaders are all praising John Key's premiership. John Key has served the interests of the capitalist class well. With the vast majority of the benefits of the meagre economic growth going to the top 1%. However most workers in New Zealand will be happy to see the back of him. John Key's premiership has seen growing inequalities, real term cuts to public services, stagnant wages, privatisation, increased state surveillance on citizens, and weakening of collective bargaining. Workers are struggling to make ends meet under the National led government as wages are stagnant and the real cost of living increases are biting into workers' living standards. To compensate workers are working longer hours just to stand still. At some point the growing discontent in society will find an avenue to express itself.  John Key has decided to leave before it is directed at him personally.

John Key has declared his support for his deputy, Bill English, to succeed him as Prime Minister. The National Party MPs are most likely to close ranks, for now, and go for an “undemocratic” coronation of English. English will be elected overwhelmingly by the National Party MPs caucus. No doubt we shall see other National MP nominees, such as Collins, throw their hat into the ring. These are token efforts and a marker of a future lurch to the right under the unfolding capitalist crisis. For now though we will see a smooth transition in the one week timetable that Key announced. This is a smoke screen of showing the public National Party unity. There are definite factions in the National Party MPs caucus. These factions will be manoeuvering behind the scenes and jockeying for position. It cannot be ruled out that the National Party's dirty washing may be displayed in public though.

With the general election in November the National Party will be looking to secure a fourth term. With current polling showing National at around 50% of the vote it would appear to be a safe bet. However, this depends on the a number of factors briefly described and the situation can change quickly into its opposite. Additionally, the charismatic qualities of Key will not be present in his successor. Under such conditions the National Party will quickly be seen for what they are by the masses - cold hearted Tories and representatives of the rich - as they intensify capitalist austerity to levels seen in other countries after the last global recession in 2008 and onwards. The National Party and its parliamentary allies will become deeply unpopular. Under such conditions even the ineffective Labour leaders may win the government benches. However to guarantee a Labour victory in November the Labour leaders need to adopt a bold socialist programme. A central plank to such a socialist programme will be the nationalisation of the major monopolies that control the New Zealand economy. Without a bold socialist programme any future Labour government will soon be thrown off course and carry out capitalist austerity. The resignation of Key shows the class fault lines at play in New Zealand and the political tremors at play in the New Zealand ruling class. These are the early indications of a political earthquake that will hit New Zealand in the future that will pose the need for socialism in New Zealand and internationally.