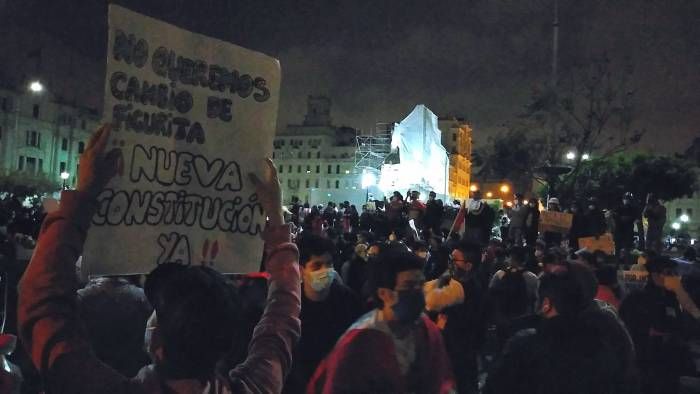 Yesterday, the Peruvian congress elected a new leadership headed by Francisco Sagasti, who will be sworn in as the new country’s president today. The election of Sagasti (Partido Morado) at the head of a list composed exclusively of congressmen who did not vote for the impeachment of president Vizcarra on 11 November is a desperate attempt to maintain the continuity of the institutions of discredited bourgeois democracy and to rebuild their legitimacy.

On Sunday, President Merino was forced to resign by the movement of the masses after having been in office for only five days, having replaced Vizcarra. Between Sunday afternoon and Tuesday afternoon the country had been without a government and without its authorities.

Sagasti is a bourgeois, liberal, centre-right politician from a relatively new party and therefore not directly tainted by corruption scandals. The other option would have been to elect a representative of the centre-left Broad Front (Frente Amplio), something that was tried on Sunday but failed. The FA played a minor role in Sagasti's slate and will now hold the office of president of the congress.

The ruling class calculates that these manoeuvres will be able to appease the masses in the streets and bring the crisis of the regime to an end. It is likely that the new president will make some concessions to the movement (finding some scapegoats for the repression that left two youngsters dead). The new Sagasti government will be presented as a "technical", "transitional" and provisional government until the April 2021 elections.

Power of the streets 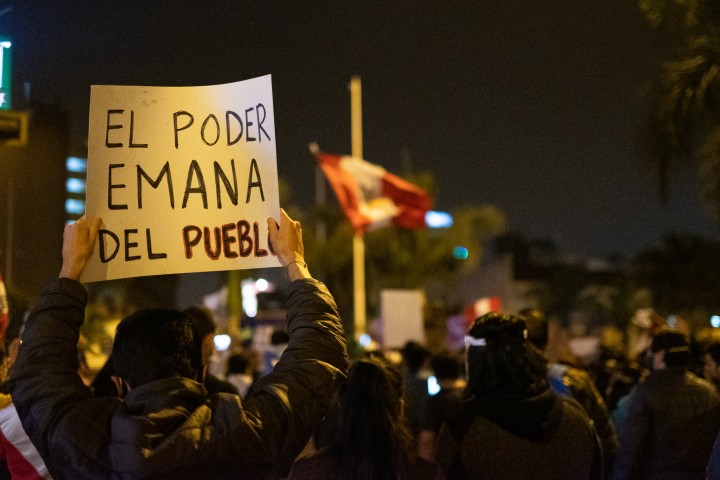 What is required is not just to change the Constitution, but to put at the centre the question of who rules: the parasites of CONFIEP and its corrupt politicians, or the masses of workers and peasants? / Image: Samantha Hare, Flickr

Demonstrations in the streets have continued, demanding justice for Inti and Jack, the two victims of the repression. It is imperative that the CGTP union maintains the call for a National Strike on Wednesday 18 November. The struggle in the streets is the only way to impose a way out of the crisis that is favourable to the working class.

It should not be forgotten that already in 2000, it was the masses, workers and peasants who dealt the final blow to the Fujimori regime in the huge Marcha of the 4 Suyos demonstration, but that led to the coming to power of Toledo. In other words, there was a bourgeois change from above.

For now, the mistrust of the masses in this solution from the top is expressed in the demand for a second ballot to take place in 2021, together with parliamentary elections, giving people the option of convening a constituent assembly to put an end to Fujimori’s 1993 constitution, which is still in place.

The insurrectionary mobilisation of the last week brushed aside the illegitimate Merino government. The movement has revealed the enormous strength of the masses in the streets, led by the youth. The young people who were at the forefront of the struggle are a generation (known as “bicentennial generation” as the country marks 200 years of its independence) that did not live through the 1980s and 90s and are not scared by the spectre of "subversion."

The freshness and spontaneity of the movement is its strength, but also its weakness. Some are now advancing the dangerous idea of ​​"neither right wing, nor left wing", which always benefits the capitalist class.

We must patiently explain that corruption is not the cause of the crisis, but only the superficial manifestation of the rottenness of the Peruvian capitalist system, backward, in crisis and under imperialist domination.

What is required is not just to change the Constitution. In order to get work, housing, health care, education, defend life and have a genuine democracy, it is necessary to put at the centre the question of who rules: the parasites of CONFIEP and its corrupt politicians, or the masses of workers and peasants who are the ones who they create wealth.