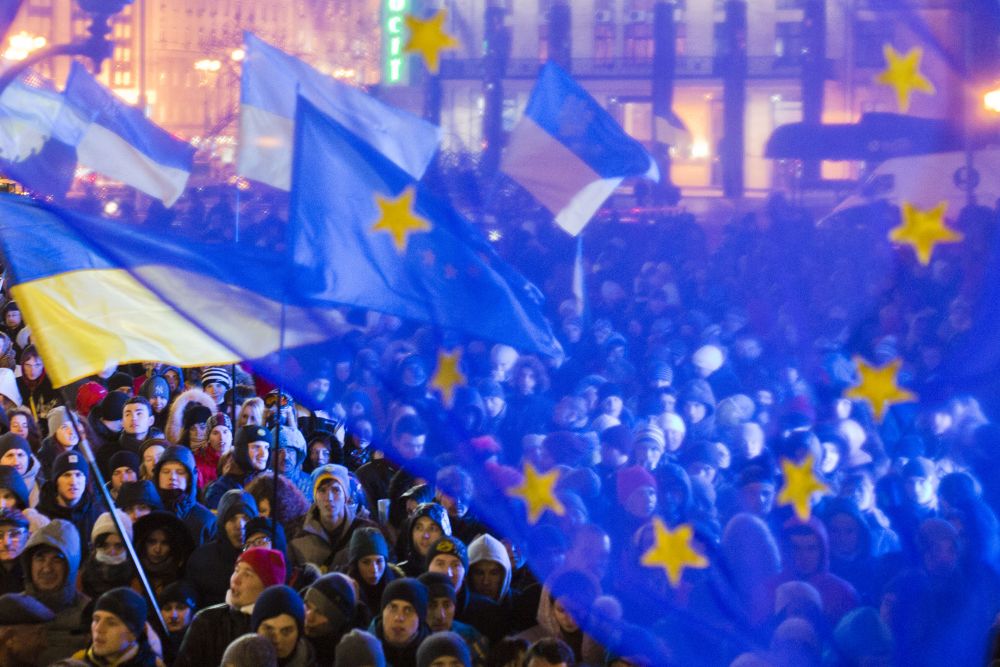 On the April 6th the Netherlands held a consultative referendum on the Association Treaty of the European Union with Ukraine. The referendum was organised by a coalition of right-wing “Eurosceptic” groups that wanted a “No” vote in order to deliver a symbolic blow to the EU and to create friction between the EU countries.

The Treaty itself had the aim of bringing Ukraine into the EU’s sphere of influence, while further opening its market to European capital. In 2013-14 the Euromaidan movement erupted over the refusal of president Yanukovich to sign the Treaty. Eventually this movement, supported by the USA and hawk elements in the EU, led to a coup against Yanukovich which led to the subsequent instability and civil war.

Interest in the referendum was very low, especially as it was over a Treaty of more than three-hundred pages that almost no-one read. The electoral quorum of thirty percent was barely reached (thirty-two percent). However, of the people who did vote, sixty-two percent rejected the Treaty. In that sense, it reflected discontent with the status quo and the EU's politics.

The “Yes” campaign was supported by most of the political parties and the bosses' union. There were visits by Ukrainian NGOs and politicians to support the “Yes” camp, which was also funded by George Soros. It presented the Association Treaty as a big step towards “European values” and “democracy”, which would serve to get poor little Ukraine out of the claws of Putin's Russia.

There was a constant hammering on about “solidarity with the Ukrainian people”: Euromaidan supposedly was a pro-European movement for democracy, “No” voters were apparently acting as indirect agents of Putin, etc. What was completely ignored, especially by the “left” parties that supported the “Yes” vote, is that the Euromaidan movement leaned on right-wing extremist thugs, which even kicked out Ukrainian left-wingers and trade unionists who wanted to join the movement.

Furthermore, there was a big layer of the Ukrainian population that was against the Treaty, especially in the south and east of the country where the industrial working class correctly feared that it would mean the closure of many factories which rely on exporting to Russian markets. Moreover, amongst Russian-speaking Ukrainians in general there was a lot of disgust with the neo-nazi gangs in the Euromaidan movement. As a result, a counter-movement for social and cultural rights began to develop. The “Yes” camp dismiss this all as Russian infiltration and propaganda.

Another point made by the “Yes” camp was centered on the economic gains that would be made for both countries. In practice this means that European multinationals can invest in Ukraine. This will be done mostly in the agricultural and primary produce sectors. Inevitably, this would negatively affect the industry in the East, which is reliant on Russian markets. These so-called calls for solidarity were complemented by pointing at the big Dutch investments that are already there in Ukraine. One of the main reasons the Netherlands is one of the biggest foreign investors in Ukraine, is that several Ukrainian oligarchs (including the notorious Rinat Akhmetov) use the Netherlands as a tax haven through mailbox-firm networks.

The EU is no friend to either Dutch or Ukrainian workers. It is the friend of the big multinationals and finance capital. Last year we could see how the Greek people were treated when they stood up against the dictates of finance capital. The latest “refugee deal” with Turkey shows how important human rights are for this “community of values”.

Lack of a socialist “No” campaign

The main “No” campaign was based on conservative nationalism. The campaign was funded by the British right-wing party UKIP. Dutch right-wing populist Geert Wilders joined in as well. Their main point was that Ukraine would soon become a member of the EU, leading to financial bailouts like in Southern Europe and Ukrainian migrants coming to Western Europe. The chances for Ukraine really joining are slim. It is not excluded, but the majority opinion within European ruling circles is opposition to it now. As for the rest, their position is just utopian nonsense, referring to an imaginary golden age of sovereignty and democracy before the EU. But in reality, when the economy is controlled by banks and monopolies, there is no “sovereignty” either inside or outside the EU.

The Socialist Party was also against the treaty. Their campaign was quite visible. They could have used their potential for a real socialist “No” campaign. Instead their position was quite contradictory. On one hand they stated the treaty was a neoliberal treaty which would neither benefit ordinary Dutch and Ukrainian people, which is correct. But on the other hand, they talked about “importing Ukrainian corruption to Dutch soil” (as if there is no corruption in the tax haven of the Netherlands!) and the threat of Ukrainian migrant workers being used to undermine Dutch wages. Instead of fighting for equal pay for equal work, the SP has a nationalist position against labour migration. Even the main trade union federation FNV has a better position on this issue. Last but not least they stated that the agreement would be "bad for the EU", which reflects the SP's mistaken belief that the EU can be reformed to a social union if were to become smaller, with less authority for the Brussels institutions.

This shows the chauvinism in the SP programme, which has been a big obstacle for the party. The SP was one of the biggest players in the referendum campaign, but because of the chauvinism in their propaganda, they barely distinguished themselves from the rightwingers in the “No” camp. If they had combined the “No” campaign with an internationalist and socialist position, explaining the capitalist nature of the EU and the imperialist role of the Association Agreement, they could have played an independent role. Because this was not done, the right-wing voices in the “No” camp dominated public opinion.

Some on the Dutch left have presented the referendum and the success of the “No” campaign as a victory for the far right and a step towards fascism. This analysis exaggerates the real strength of reaction in Holland.

In the first place the “No” vote was not a vote for right-wing ideas in general. The vote was rather a confused vote against the Rutte government and against the EU. Because of the SP's contradictory campaign, it could not mobilise more people for a leftwing “No” vote. As a result, as we have noted above, only 61% of a 32% turnout voted against. The biggest group of potential voters did not vote.

Since the refugee crisis began there has been an upsurge of far-right activities in Holland. Some new far-right groups have been set up, including a branch of the German movement Pegida. Most of their activities are local demonstrations against the construction of new refugee centers. They feel strengthened and are more aggressive than before. This should be taken seriously by the labour movement and the left. In order to prevent physical attacks on migrants or activists, it is necessary to set up self-defence committees in order to protect ourselves. Nevertheless they are no mass force.

At the same time, the PVV, the party of the right-wing populist Geert Wilders, is leading in the polls. He is combining the discontent against the government of Mark Rutte with scare tactics and hatred towards refugees. Significantly, he called upon Dutch citizens “to resist and revolt” against “the political elite”. This is extremely hypocritical, as his party's voting behaviour is eighty percent the same as that of main ruling party VVD. The PVV complains that there is money for refugees, but not for healthcare for the elderly, while the party itself supported healthcare cuts and more marketisation in the healthcare sector. Wilders is a right-wing demagogue and can offer no solutions. The struggle against Wilders can only work out if he is unmasked and if the workers’ movement puts forward a socialist alternative to Rutte's austerity policies.

Discontent with the status quo will result in shifts to the left and the right. We should remember that in the Netherlands the shift to the right in 2002 with the victory for Pim Fortuyn's party was followed by the biggest trade union demonstration in the country's history in 2004 and the left-wing electoral results of 2006. The main problem is the lack of a clear socialist alternative. While Geert Wilders calls for “revolt and resistance against the political elite”, the Socialist Party has embraced “moderation” in order to be seen as a “respectable” political party that could join the ruling coalition after the 2017 elections. This at a time that the bankruptcy of capitalism is more clear than ever and a growing layer of the population is looking for an alternative.

At the moment mass actions by young people against the new labour law rock the country of France. There were similar pessimistic moods some months ago when the Front National made electoral gains. This shows that there is no one-sided shift to the right in France. Neither there is in the Netherlands.

What will happen now?

The consultative referendum is a thorn in the side of the Rutte government. Ignoring the result will lead to a complete collapse in trust in the government, while refusing to ratify the agreement will lead to a further crisis in the already crisis-ridden EU. The fact that a consultative referendum initiated by a bunch of right-wing buffoons leads to such big hysteria and a potential political crisis shows how fragile the whole political set-up is in the Netherlands and the EU.

While all opposition parties (including the ones campaigning for a “Yes” vote) wanted the cabinet to take a quick decision about what to do with the referendum results, the Rutte government has decided to wait at least until the June 23rd to take a final result. Not by accident, this will follow the British referendum on leaving the EU, which shows the European leaders have a bigger headache on this question. If this works out fine for them, it might be possible the Association Treaty with Ukraine will be changed partially and then signed and ratified again. In essence nothing will change.

It is important to keep a sense of proportion and not exaggerate the importance of this referendum. The most significant element was the hysteria and the atmosphere of crisis that was generated around it, which are symptoms of the fragile political situation. There is no movement towards fascism now. We will see polarisation to the right, but also to the left. The development of the class struggle in the Netherlands may be lagging behind other countries, but its strong connection to the world market means it will be affected by the fragility of global capitalism. The advent of a new crisis can act as a catalyst this time. Meanwhile we must patiently explain and build our forces.