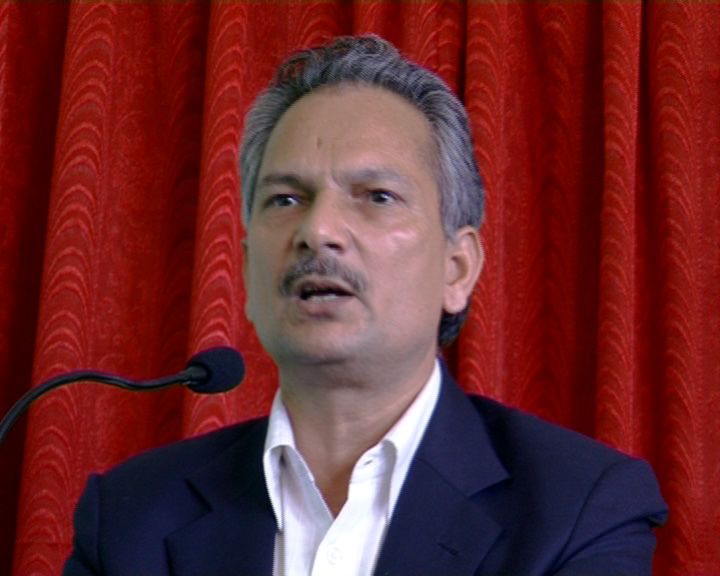 For the second time in Nepal since the election of the Constitutional Assembly in 2008, a Maoist is heading the Nepalese government. This time it is Dr. Baburam Bhattarai, who has become the new, 35th, Prime Minister of Nepal. But what does this mean for the Nepalese revolution?

The speaker of the Constituent Assembly, Subash Chandra Nembang, declared Bhattarai the winner in an election that saw Ramchandra Poudel of the Nepali Congress, a liberal bourgeois party in Nepal, challenging Bhattarai. Bhattarai is the vice-chairman of the UCPNM and was the finance minister in the first Maoist-led government led by its Chairman Prachanda two years ago. He secured 340 votes in favour against Poudel’s (of the Nepali Congress) 235 out of 594 votes. The result of the vote saw an alliance between the UCPN and the majority of the Madhesi Members of Parliament.

Bhattarai had generally been seen by the middle class, the local media and some business elements as a good finance minister that had managed to improve the tax system and secure investment in Nepal. In February we said “If Prachanda had allowed Baburam Bhattarai to file his nomination, there was a strong possibility that Baburam could have been elected as Prime Minister, but due to the inner party struggle within the Maoist Party, Prachanda probably did not want Baburam to become leader of the country with the current internal dispute, and in the end the Maoist leader supported JN Khanal instead, a member of the previously arch-rival CPN-UML”.

Six months later the internal struggle within the party has re-shifted the balance of power and Prachanda has sided with Bhattarai. We would like to remind everyone that these power struggles remain at best at the central committee level of the UCPNM.

The news of the election of Bhattarai as prime minister came as a shock after months of splits and divisions within the leadership of the UCPNM that had reached a deal previously with the other communist party, as we have explained before. The core problem for any government has been what to do with the former Maoist fighters that had been waiting for a decision for almost five years now.

On September 1st the new government decided to hand over the keys of the containers where the Maoists’ weapons had been deposed. This surprising action was meant to unlock the political crisis and to allow the writing of the Republican constitution for which the people’s war was fought.

Bhattarai told the 19,000 Maoist ex-combatants that they will either join the Nepalese security forces or be rehabilitated into society – this category will include those who choose to retire. The most radical wing of the UCPNM, initially agreed to abandon what is called "dual security" [Not relying on the Nepalese Royal Army, only keeping the former guerrillas having access to its weapons]. Then, led by Mohan Baidhya, a section of the party started to send contradictory messages about the handing over of the weapons.

This has developed into a de facto split within the UCPNM with the support of the entire Maoist movement in the region. Naxalites and Maoists of India, that are fighting a similar people's war that the Nepalese fought for about a decade, have started to launch inflammatory insults against the "traitor" leadership of the UCPNM.

From a Marxist point of view, seeking the support of the Madhesi bourgeois nationalist parties is a serious mistake, but the handing over of the weapons just shows how far from Marxism these so-called Marxist-Leninists are. They have no serious understanding of the role of the state apparatus, the role of the local bourgeoisie and/or of imperialist forces in Nepal or elsewhere.

The leaders of the UCPNM after decades of struggle "directed the PLA combatants to fulfil their responsibilities by being careful as, for them, the time has come to pile up continuous pressure for peace and a constitution. UCPN (Maoist) spokesperson, Dinanath Sharma, said his party had implemented the past agreement and the dual security provision for the Maoist leaders has ended completely from today. (source: Himalayan Times)

Now the Maoists and Madhesi parties of the ruling coalition have agreed to integrate up to 7000 Maoist fighters into the Nepalese Army under a separate department and start regrouping the Maoist fighters immediately with the aim of complete integration within one month. Another significant point is the enrolment of 10,000 Madhesi youth into the Nepalese Army which is a signal to the Madhesi parties supporting the coalition since this minority was under-represented within the former Royal Army.

The group within the UCPNM that is rejecting the deal made by Prachanda and Bhattarai is lead by Baidhya (Kiran). The issue is being discussed in the UCPNM Central Committee and yet again, a key decision for the future of the Nepalese revolution that started back in 2006 is going to be reduced to a handful of, mostly, men that are now in the circles of bourgeois power in Kathmandu but that do not have any hold over the state apparatus.

Of course, the liberal bourgeois Nepali Congress has accused Baidhya (Kiran) of being guided by all sorts of "crazy and foreign" Maoist groups to derail the peace process in Nepal. But the truth is that so far the Maoists in government have not resolved, or even started to resolve, a single issue in their programme. On the other hand, the Maoists are doing all the dirty work that would have been unthinkable with a Congress-led government.

The Constituent Assembly has not written the Constitution, land reform is going backwards (we will return to this point) and on the contrary, the armed wing of the party is abandoning its only guarantee of having any negotiating power: their weapons. On top of that, the UCPNM may split, becoming the second parliamentary force, which in turn would split all the movements that they have created: unions, student organizations, peasants’ organizations…

A government, but with what policies?

As we have explained in the pages of In Defence of Marxism, Nepal is a semi-feudal country in need of land reform. During the people's war many pieces of land were seized from landowners in the liberated areas held by the Maoists. Now they have reached an agreement to return to the landlords all the land captured by peasants during the conflict years. As the Madhesi parties mostly represent the interests of the Madhesi landlords, land reform is not on the agenda of the alliance. This is a terrible betrayal of the social base of the Maoist fighters that took up the flag of the Maoists party with the hope of abolishing exploitation by the landlords. 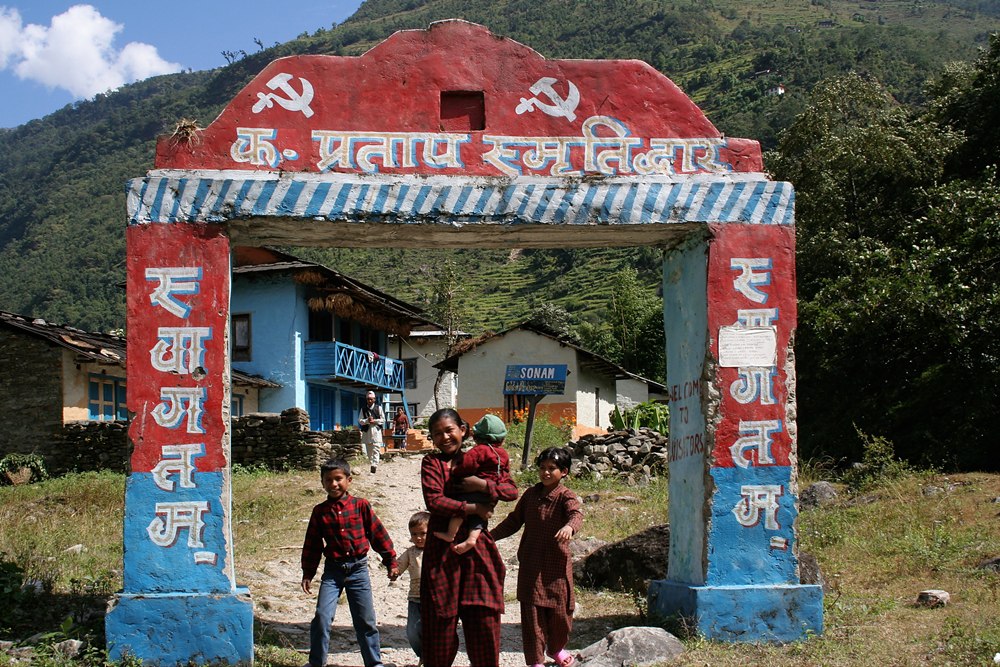 Nepal maoist checkpoint - Photo:Pavel_Novak Shortly after the uprising we wrote “In a situation where the movement of the workers and the peasants could take power, it would simply be a manoeuvre and a step backwards to divert the struggle into the establishment of bourgeois democracy. This would only play into the hands of the ruling class. When the workers and peasants, through a revolutionary struggle, come to power, they cannot simply stop at tackling the tasks of the bourgeois revolution – in fact the solution of the tasks of the national democratic revolution, such as land reform, and liberation from the domination of foreign powers, can only be achieved and maintained through the implementation of socialist measures”.

The Maoists are trying their best not to be seen as an obstacle to peace and a constitution. In that sense they have given themselves a 45-day deadline that is being criticized by the bourgeois politicians, in order to put on the pressure.

Of course, this coalition, like all the other previous coalitions, cannot last long because its internal contradictions are too big. The task of drafting the constitution and ensuring a smooth economic development is colossal. The ruling class in Nepal has no intention of allowing the UCPNM to draft the Constitution. The only objective of the Nepalese ruling class and the regional imperialist powers is to split and divide the UCPNM as many times as possible in order to achieve a stable bourgeois government that can defuse completely the process started during the October days back in 2006.

The danger is that the Maoist leadership has disarmed a wing of the revolutionary forces, and this will only encourage the bourgeoisie and the imperialists to wage an even more militant campaign against any the achievements of the people’s uprising.

The international economic crisis is starting to have an impact in India and this will have, sooner or later, its effects in Nepal. The Maoist leaders continue to play the game with Indian imperialism as the declarations of the UCPNM show. A split UCPNM would have to rely more on the pro-business elements of the Assembly pushing them even further away from the masses. This is a recipe for disaster.

Marxism is the only serious solution for the Maoist leadership. If they try to be the most efficient bourgeois element and convince the capitalist class of India that they mean business it would damage the party significantly. It would be a step back for the revolutionary movement. On the contrary, if they decided to correct their course and carry out a programme of social and democratic reforms they would re-inspire the forces that succeeded in overthrowing the king.

The Maoists have placed a Damocles sword over their own heads. If the peace process were to fail they would find themselves in a situation like that in the early 1990’s, when a section of the party took up arms and the rest became the current CPN-UML. The landlords, the ruling elite and the imperialist forces would take the opportunity to crush the revolutionaries. This is the great danger that the Nepalese revolution is facing.

We have explained many times that in a semi-feudal country like Nepal, when the masses have succeeded in overthrowing the regime they cannot confine themselves to the limits of bourgeois, capitalist democracy. The workers and peasants have to take power into their own hands in order to implement even the most basic democratic reforms. If the Maoists had had a revolutionary and internationalist outlook they would have used the Nepalese uprising as a tool to spark the Indian revolution. The Tunisian analogy is there for all to see.

For that matter the Maoist leaders, especially leading the Prachanda faction, have the duty of calling a party Congress to discuss and develop a new strategy as well as opening the door for a new party leadership, as well as avoiding a fatal split. We can see clashes between Maoist cadres taking place at local level that indicate deep divisions within the party. A frank and honest debate amongst comrades needs to be had to try to avoid disaster. 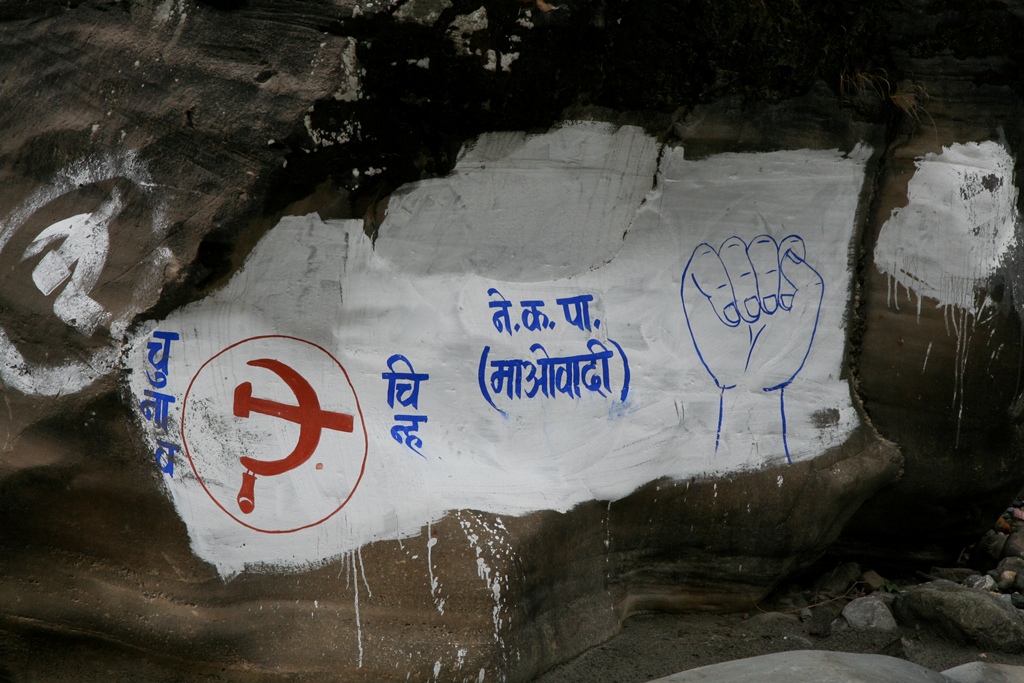 CPN Maoist mural - Photo:Tom Booth As we have said before, if a split does take place, a section of the party might go down the blind alley of parliamentary cretinism and another wing the proven ineffective road of the people’s war. A return to the genuine ideas of revolutionary communism and the Bolshevik revolution is what is required, starting with a party congress where the rank and file (workers and peasants) have a real say in the future of the party and finishing with the adoption of a Marxist programme to take the revolution forward.

The Maoists are at a crossroads, now more than ever. A few months ago we said that “Time is ticking away and the divisions within the party will be exploited by the bourgeois and imperialists in order to form a Government to demobilise the masses as much as possible. Given the current wave of revolution sweeping across the planet, letting the opportunity go would be a criminal policy on the part of the Maoist leaders”. A split would be a gift to the bourgeoisie and to the imperialists!

No to the handing over of weapons!

No trust in a bourgeois army! For a people’s militia!

For a party congress to re-dress the Maoist policy!