One hundred workers and trade union activists gathered in Reggio Emilia for the first national conference of the workers of Sinistra Classe Rivoluzione (the Italian section of the IMT). The event was a huge success, both in terms of attendance and, most importantly, in terms of the  level of the political discussion.

The first day Paolo Grassi led off the debate on our trade union thesis, which was discussed in the previous weeks in every branch of our movement all over Italy.

We are facing an unprecedented attack on workers living standards and trade union rights from the bosses and the Renzi government. In the autumn of 2014 the government issued a new law, “Jobs act,”  to abolish what was left of the Labour Code (Statuto dei Lavoratori), which was gained after the Hot Autumn of 1969. The bosses now have the freedom to hire and fire workers as they wish. Workers tried to fight back and flooded the streets of Rome on October 25th with one million demonstrators, but the trade union leaders of the Confederazione Generale Italiana del Lavoro (CGIL) had no intention of continuing the struggle and so the movement was defeated. 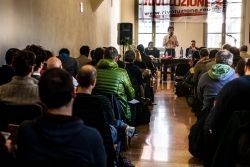 The next step for the ruling class is a de facto scrapping of the national bargaining contract in every sector. The Italian bosses have decided that they can only survive in the world market by viciously cutting the cost of labour.

Over the past few months there have been increasing incidents of victimisation and sacking of shop stewards from different factories, particularly in the main industrial heartland of Italy, Emilia-Romagna. These actions are intended to send a message: that the bosses want to have the right of life and death on the workers in workplaces.

Against this offensive, the leaders of the trade unions have no idea how to fightback. They are totally unprepared to act in an epoch of crisis, where there is no space anymore for concessions, and where government and bosses refuse even to talk with the trade unions.

This new situation has created a standstill of the class struggle at a national level. This autumn has been one of the “coolest” since the 1950s. 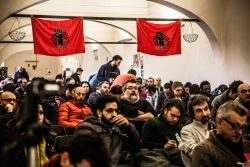 The role of a Marxist trade unionist must be to fight against the isolation of activists, as well as attacks from the bosses and right-wing elements of the trade union leadership. In such a difficult situation a tendency of adaption to the “realistic” line of the bureaucracy can develop. At the same time it would be a mistake to act impatiently and listen to the “sectarian” sirens and break away from the majority of the trade union movement.

The irony of today's situation is that the overwhelming majority of the “sindacati extraconfederali” (literally “out of the three main confederations,” split offs from CGIL-CISL-UIL since the 80s) are in deep crisis as well, with a clear tendency of “adaptation” to the state apparatus clearly emerging.

As Paolo Brini, member of the central committee of the FIOM-CGIL explained, a trade unionist of Sinistra Classe Rivoluzione is first and foremost a Marxist cadre, and the main task in his trade union activity is to build the Marxist organisation.

In the debate several worker comrades intervened. Some explained their daily struggle as revolutionary trade unionists against repression and isolation, others focused on our intervention in the recent strikes. 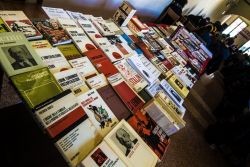 Our position is not that of mere commentators of events, but of active players in the class struggle of this country. The majority of those who attended the conference were shop stewards from all over Italy, representing metal workers, transport workers, shop assistants, school teachers and public sector workers. We also have a comrade in the national leadership of the CGIL, and comrades in the leadership of the FIOM (metal workers), FLC (school workers) and NIDIL (casual workers).

The workers of Saeco, a metal factory near Bologna, fought for 73 days against the closure of the plant, organising a blockade at the gates of the plant. All the valley was involved in the struggle, but in the end a bad deal was reached by the unions, and 400 out of 558 workers were made redundant. Our worker comrades from other factories intervened showing our solidarity and putting forward a way out for the struggle, gaining the respect of the workers.

In Genoa at the end of January the workers of Ilva steel plant in the neighborhood of Cornigliano, occupied the factory against a proposal of new redundancies and a threat of closure by the government. After a day of general strike of all the metal workers of the town, called by FIOM, the government made a partial step back and agreed to meet the workers. During this strike we could see a new phenomena: a mood of hardened militancy from the youngest workers, who can clearly see no future whatsoever if the factory closed, and are ready to struggle till the end.

So, if the general picture is that of a lull in the movement, at the same time, in a number of factories and workplaces, the workers are beginning to understand that only an all-out struggle can be successful. They are ready to answer this kind of call, and not so keen to attend “ordinary” 2-hour strikes or saturday demos in Rome, because they understand that “the normal methods of struggle” of the past are useless.

This is completely true in the logistics sector, where a number of strikes have taken place, several of them victorious, and to which was dedicated the second day of the conference in a discussion introduced by Sonia Previato.

Logistics is one of the few sectors of the economy that is not in crisis and where workers are heavily exploited. Drivers, porters and couriers used to work 12-15 hours a day, often for 5 or 6 euros an hour, with no rights, no national health service and no holidays. They work together, but they are hired by different firms to better divide them. In most cases the workers are immigrants, with very little trade union experience, and have just awakened to political life for the first time.

As one comrade of ours, who works as a driver, said in the conference; “Before (we got organised) we were like beasts, now we are human beings”.

The strikes in the depots of the logistics companies were very militant, with blockades of any delivery and the activity of the depots brought to a complete standstill. Because they were very harmful for the company, on several occasions the strikes led to victories, giving a new confidence to the workers. Sinistra Classe Rivoluzione is playing a role in this sector and is organising drivers in cities like Milan and Rome. All of them intervened with lively speeches in the debate.

In other situations, like in Motovario and Carpigiana in Modena, our metalwork shop stewards were able, with correct tactics and slogans, to unite labourers and metal workers of the same factory in a struggle for better conditions for the labourers, the most exploited part of the proletariat.

The strategy of the bosses is divide et impera, so the task of a union should be to break artificial division amongst the workers. It was a topic widely discussed in the conference.

That there is a potential to unify several sectors of the working class was shown in the last days in Castelfrigo, a food processing plant that employs a thousand workers. Two categories of the CGIL (FLAI, food workers and FILT, transport workers), not the most left-wing ones, were forced by the pressure of the rank and file to organise an all out strike. For the first time Chinese, Arab and African workers fought together, defying even an attempt by the police to break the strike. The workers won a total victory.

We think that this struggle of the most downtrodden sector of the proletariat is a sign of future times to come. This new epoch is going to create new class fighters and a new militant leadership.

Today, the dominant feature amongst the trade union leaders is confusion, especially amongst the left-wing ones. The political project of Landini, the FIOM general secretary, “Coalizione sociale” is suspended in mid-air. Nevertheless we decided that, at the next congress of the CGIL, we will defend the need of one document of the left wing in opposition to the one of the majority.

The conference ended with a mood of enthusiasm, with the singing of The Internationale and with the confidence that only our tendency, through the intervention in the daily struggle of our class, can lead the workers to the conquest of power.