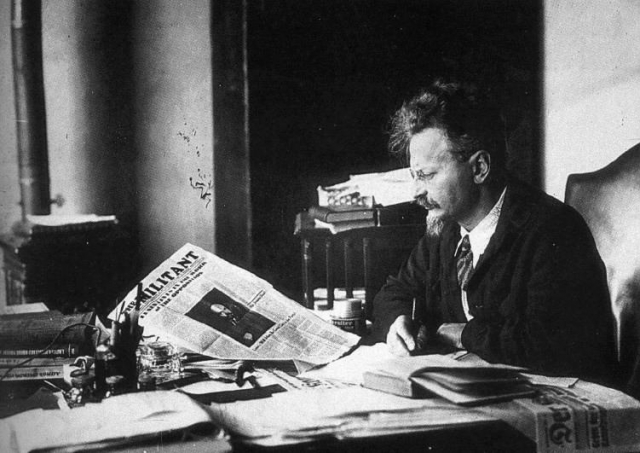 After 1904 I stood outside of both the Social Democratic factions. I went through the revolution of 1905-1907 arm-in-arm with the Bolsheviks. During the years of the reaction, I defended revolutionary methods in the international Marxist publications against the Mensheviks. I still hoped, however, that the Mensheviks would move farther to the left, and I made several attempts to bring about a union in the party. It was not until the war that I became finally convinced of the utter hopelessness of the Mensheviks. In New York, at the beginning of March, 1917, I wrote a series of articles dealing with the class forces and perspectives of the Russian revolution. At that very time, Lenin, in Geneva, was sending to Petrograd his Letters from Afar. And both of us, though we were writing in different parts of the world and were separated by an ocean, gave the same analysis and the same forecast. On every one of the principal questions, such as the attitude toward the peasantry, toward the bourgeoisie, the Provisional government, the war, and the world revolution, our views were completely identical. Here a test of the relations between “Trotskyism” and Leninism was made on the very touchstone of history. And it was carried out under the conditions of a chemically pure experiment. At that time I knew nothing of Lenin’s stand; I argued on the basis of my own premises and my own revolutionary experience, and I drew the same perspective and suggested the same line of strategy as Lenin.

But perhaps the question was quite clear to everyone at that time, and the solution universally accepted? On the contrary; Lenin’s stand at that period, that is, before April 4, 1917, when he first appeared on the Petrograd stage, was his own personal one, shared by no one else. Not one of those leaders of the party who were in Russia had any intention of making the dictatorship of the proletariat the social revolution the immediate object of his policy. A party conference which met on the eve of Lenin’s arrival and counted among its numbers about thirty Bolsheviks showed that none of them even imagined anything beyond democracy. No wonder the minutes of that conference are still kept a secret! Stalin was in favor of supporting the Provisional government of Guchkov and Miliukoff, and of merging the Bolsheviks with the Mensheviks. The same stand, or rather an even more opportunist one, was taken by Rykov, Kamenev, Molotov, Tomsky, Kalinin, and all the rest of the leaders and half-leaders of to-day. During the February revolution, Yaroslavsky, Ordzhonikidze, chairman Petrovsky of the Ukrainian Executive Committee, and others were publishing with the Mensheviks at Yakutsk a paper called The Social Democrat, in which they expounded the most vulgar and provincial sort of opportunism. If those articles in the Yakutsk Social Democrat, edited by Yaroslavky, were to be reprinted to-day they would kill him as a political thinker, if such a death were possible for him. Such are the present guards of “Leninism.”

I realize, of course, that at various times in their lives they have repeated Lenin’s words and gestures after him. But the beginning of 1917 found them left to their own resources. The political situation was difficult. Here was their chance to show what they had learned in Lenin’s school and what they could do without Lenin. Let them name one of their number who arrived independently at the position achieved identically by Lenin in Geneva and by me in New York. They cannot name a single one. The Petrograd Pravda, which was edited by Stalin and Kamenev until Lenin’s arrival, will always remain a document of limited understanding, blindness, and opportunism. And yet the mass membership of the party, like the working class as a whole, was moving spontaneously toward the fight for power. There was no other path for either the party or the country.

In the years of reaction, one needed theoretical foresight in order to hold fast to the prospect of a permanent revolution. Probably nothing more than political sense was needed to advance the slogan of a fight for power in March, 1917. Not a single one of the present leaders revealed such a foresight or such a sense. Not one of them went beyond the point of view of the left petty bourgeois democrat in March, 1917. Not one of them stood the test of history.

I arrived in Petrograd a month after Lenin– it was exactly that long that I had been detained in Canada by Lloyd George. By that time, the situation in the party had changed substantially. Lenin had appealed to the masses against their sorry leaders. He had launched a systematic fight against “the old Bolsheviks who,” as he wrote in those days, “more than once have played a sorry part in the history of our party by repeating a formula, unintelligently learned, instead of studying the peculiar nature of the new and living reality.” Kamenev and Rykov tried to resist. Stalin silently stepped aside. Not one of his articles written about that period shows that Stalin made any attempt to estimate his previous policy and win his way to Lenin’s stand. He simply kept silent, because he had been too much compromised by his unfortunate leadership during the first month of the revolution: He preferred to withdraw into the background. He never made any public appearance to defend Lenin’s views; he merely stood back and waited. During the most responsible months of the theoretical and political preparation for the up rising, Stalin simply did not exist, in the political sense.

At the time of my arrival, there were in the country many Social Democratic organizations which included both Bolsheviks and Mensheviks. This was the natural result of the stand that Stalin, as well as Kamenev and others, had taken, not only in the early stages of the revolution but also during the war although one must admit that Stalin’s position during the war was known to no one; to this rather important question he had never devoted a line. To-day the Communist International textbooks all over the world among the Communist Youths of Scandinavia and the Pioneers of Australia keep pounding it in that Trotsky made an attempt in 1912 to bring about the union of the Bolsheviks with the Mensheviks. But they never once mention the fact that in March, 1917, Stalin was advocating union with Tzereteli’s party, and that it was not until the middle of the year 1917 that Lenin was able to pull the party out of the morass into which its temporary leaders the epigones of to-day had driven it. The fact that not one of them understood the significance and direction of the revolution at its outset is now represented as a special dialectic profundity, in contrast with the heresy of Trotskyism, which was audacious enough not only to understand the day before, but to foresee the day after as well.

When I told Kamenev on my arrival in Petrograd that nothing separated me from Lenin’s famous “April theses” that determined the new course of his party, the former’s only reply was, “I should say not!” Before formally joining the party, I took part in drafting the most important Bolshevist documents. It never entered any one’s head to ask if I had renounced “Trotskyism,” as I was asked thousands of times during the period of the epigone decline, by the Cachins, Thälmanns, and others of the hangers-on of the October revolution. The only juxtaposition of Trotskyism and Leninism to be heard in those days was in the leading group of the party, where they accused LENIN of Trotskyism during the month of April. Kamenev did this openly and with much insistence. Others did it more cautiously, behind the scenes. Many “old Bolsheviks” said to me after I arrived in Russia: “Now the celebration is on yourstreet.” I had to argue that Lenin had not come over to my point of view, but had developed his own, and that the course of events, by substituting arithmetic for algebra, had revealed the essential identity of our views. And that is what really happened.

At those first meetings of ours, and even more after the July days, Lenin gave one the sense of a terrific inner concentration under a surface of calm and “prosaic” simplicity. The movement that had found its symbol in Kerensky seemed all-powerful in those days. Bolshevism seemed nothing more than an “insignificant group,” and officially it was being treated as such. The party itself did not realize the power it was to have on the day after, but Lenin was leading it firmly toward its greatest tasks. I harnessed myself to the work and helped him.

Two months before the October revolution, I wrote: “To us internationalism is not an abstract idea existing only to be betrayed on every opportune occasion (as it is to Tzereteli and Chernov), but is a real guiding and wholly practical principle. A lasting, decisive success is inconceivable for us without a revolution in Europe.” At that time I could not yet place the name of Stalin, the philosopher of “socialism in a single country,” beside the names of Tzereteli and Chernov. I concluded my article with the words: “A permanent revolution versus a permanent slaughter: that is the struggle, in which the stake is the future of man.” This was published in the central organ of our party on September 7, and later reissued as a separate pamphlet. Why did my present critics keep silent then about my heretical slogan of permanent revolution? Where were they? Some, like Stalin, were waiting cautiously, peering about them. Others, like Zinoviev, were hiding under the table. But the more important question is: How could Lenin have tolerated my heretical propaganda in silence? In questions of theory he recognized no such thing as indifference or indulgence; how did he happen to allow the preaching of “Trotskyism” in the central organ of the party? On November 1, 1917, at the meeting of the Petrograd committee (the minutes of this historical meeting – historical in every sense of the word – are still kept secret) Lenin said that after Trotsky had become convinced of the impossibility of union with the Mensheviks “there has been no better Bolshevik.” And in this he proved very clearly and not for the first time, either that it had not been the theory of permanent revolution that had separated us, but the narrower, though very important question of the attitude toward Menshevism.

Looking back, two years after the revolution, Lenin wrote: “At the moment when it seized the power and created the Soviet republic, Bolshevism drew to itself all the best elements in the currents of Socialist thought that were nearest to it.” Can there be even a shadow of a doubt that when he spoke so deliberately of the best representatives of the currents closest to Bolshevism, Lenin had foremost in mind what is now called the “historical Trotskyism”? For what was nearer to it than the current that I represented? And whom else could Lenin have had in mind? Perhaps Marcel Cachin? Or Thälmann? To Lenin, when he surveyed the past development of the party as a whole, Trotskyism was no hostile and alien current of Socialist thought, but on the contrary the one that was closest to Bolshevism.

The actual course of the development of ideas in the party, as we can see, did not at all resemble the false caricature that the epigones, taking advantage of Lenin’s death and the tide of reaction, have been creating.