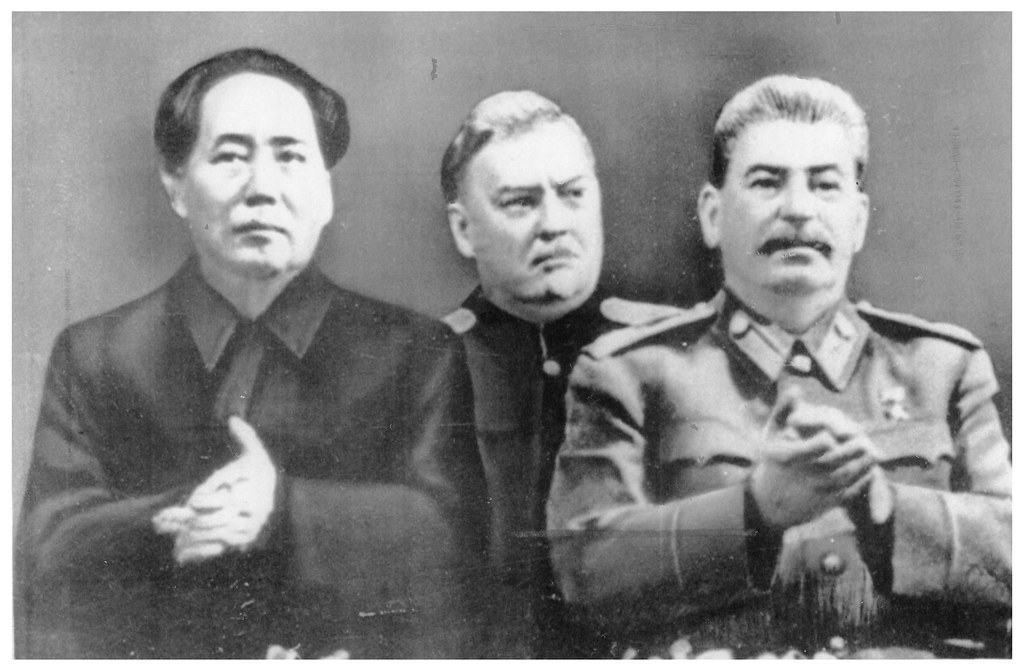 In 1949 Mao’s Communist Party came to power in China. Right from the very beginning the new regime was modelled on Stalinist Russia. This meant that power was in the hands of a privileged bureaucracy and not the working class. Even before the Chinese Stalinists came to power Ted Grant had explained that implicit in the situation was an inevitable conflict between the Russian and Chinese bureaucracies. "Socialism in one country", the theory espoused by the Stalinists, involved a nationalist outlook as opposed to an internationalist one.

If the leaders of the Soviet Union and China had been genuine Communists, the economies of the two countries could have been integrated into an international plan of production which would have greatly benefited the workers of both countries. But for this to be, the workers would have needed to be in power. Instead each national bureaucracy had their own narrow interests which led to the famous Sino-Soviet split.

For several years there was an intense exchange of insults between the two regimes which ended with the Soviet Union withdrawing aid from China in August 1960. This event was to lead to an international split throughout the Communist parties of the world. The Chinese bureaucracy hid the real reasons for the split and claimed that it was defending genuine revolutionary ideas as opposed to the "revisionist Russians". This meant that many leftward leaning Communist party members around the world turned to China as an alternative to the ever more rightward moving leadership of the official Communist parties. This was a tragedy as they were merely swapping one form of Stalinism for another.

Today the nature of the Chinese bureaucracy is clear for all to see. It has been introducing ever more "market economy reforms", which are endangering the nationalised planned economy. This article, written in May 1965 by Ted Grant, shows how genuine Marxism was able to see the real processes going on and not be fooled by the words of the Chinese leaders. Then as now Marxism was a tool that allowed one to see through the fog of seemingly contradictory and incomprehensible events. (October 3, 2003)

Using the pretext of support for national liberation movements, the Chinese "Communist" Party and Government denounced the recent Conference of Communist Parties in Moscow in almost hysterical terms. The Peking Review of March 26th writes, "Of the 26 Parties whose attendance was ordered by the leaders of the CPSU, the seven fraternal Parties of Albania, China, Indonesia, Japan, Korea, Rumania and Viet Nam firmly refused to take part in the divisive meeting. The fraternal Marxist-Leninist Parties of Australia, Brazil and India likewise condemned and opposed the meeting. The 19 units in attendance were rent by contradictions and disunity."

In attacking the Conference, the article, representing the position of the Chinese Stalinist leaders, continues, "The communiqué... is larded with many high sounding hypocritical phrases, such as ‘oppose imperialism’, ‘support the national liberation movement’... What a striking similarity there is here to the adoption by US Imperialism of some of the main slogans of the CPSU! Peaceful coexistence, peaceful competition, peaceful transition, relaxation of tension, general and complete disarmament, the two-power domination of the world, (our emphasis) joint support to the reactionaries of all countries, joint efforts to undermine the world revolutionary movements through the United Nations, joint efforts to oppose China, and so on - these slogans and schemes of Khrushchev’s have all been taken over by the US Imperialism! The leaders of the CPSU and the US Imperialists have joined in a love feast, exchanging information and working in common against communism, against the people, against revolution and against the national-liberation movement for the purpose of maintaining imperialism, revisionism, and reaction everywhere against all revolutionaries." And to sharpen the split "The divergence between Marxism-Leninism and Khrushchev revisionism ...is a divergence between two antagonistic classes, the proletariat and the bourgeoisie".

The article sums up "In a nutshell, they are continuing to adhere to Khrushchev’s reactionary policy of Soviet-U.S. co-operation for the do urination of the world."

The real reason for the split is indicated here: the attempt of the Soviet bureaucracy to arrive at an agreement with the US Imperialists on the basis of the status quo, without any consideration for the interests of the Chinese bureaucracy, controllers of a sub-Continent of 700 million people.

The objections in relation to the "sell-out" of the colonial or semi-colonial peoples of Latin America, Asia and Africa, are for the purpose of striving to obtain influence and the use of this influence to increase the power, privileges, prestige and income of the Chinese bureaucracy. Thus the Chinese Government attempts to compete with the American Imperialists and the Soviet bureaucracy, in giving "aid" and loans to "underdeveloped" parts of the world, despite the enormous needs of China itself, which remains, a backward area despite the progress made since the Revolution.

The real attitude of the Chinese Government is shown in the very same issue where they laud the reactionary military-police state of Pakistan, a feudal-capitalist-theocratic regime. "Chairman Liu Shao-Chi and Premier Chou En-Lai in a joint message on March 22nd greeted President Ayub Khan on the occasion of Pakistan's National Day and congratulated him on reassuming the presidency following his election in January." This followed the giving of £50 million in aid to this reactionary government. So much for the support of the national liberation movement. China, like Russia is playing the game of power politics.

The struggle between China and Russia, following on the exposure of the crimes of Stalin, the events in Hungary and other developments has resulted in the splitting of the "Communist" Parties on nationalist lines.

From the point of view of the Moscow bureaucracy the meeting in Moscow was a failure. The attempt to reassert Russian control did not succeed. Each party was given a relative independence of movement as a result of the split.

From the side of the Chinese the working class can expect no better a lead than from the Russian Stalinists. The Chinese while mouthing revolutionary phrases have opposed the reforms carried out by the Russian bureaucracy in order to maintain their rule. Because of their position as a "pariah" in international affairs, which American Imperialism has imposed on them, they can pose as being more revolutionary than the Russians.

This can lead to sincere workers in the Communist Party, despairing of the opportunism of their leaders, looking to China for a revolutionary lead. This is to move from the policy of Beelzebub to that of Satan.

The lesson of modern developments underlines the correctness of the great theorists of Socialism: the need for an internationalist policy. The world has become far more integrated economically, with every part dependent on every other part, than even in the early stages of capitalist development. No country can stand on its own. Internationalism is an expression of the fact that the interests of the working class of the world are organically linked.

The abandoning of the pretence of internationalism by the so-called Communist Parties, the split between Moscow and Peking, the open reformism of the Communist Parties of the West, lays the basis for a new and deeper crisis in the Communist Parties. The rank and file no longer accepts without question the policies of the leadership. The confusion caused by 3 or 4 decades of miseducation by the so-called leaders of these parties still plays a great part in the thought of the ranks. But great events will put these leaders to the test again and again.

The ideas of Marxism, the simple and pure ideas of Lenin on the class struggle, of international solidarity; of the need for workers democracy, of control of industry and the state by the workers, will find their way to the consciousness of the ranks.

From Ted Grant's "The Unbroken Thread"