Last Thursday there was a demonstration in Chefchouan to demand the immediate release of the three young victims of the police repression in Jebha. They were arrested on January 11 following their participation in the protest movement against the deterioration of the living conditions in their village. We also ask the international youth and workers movement to keep on sending letters of protest.

Last Thursday, 21st of January, some 100 persons met in front of the Court building in the city of Chefchouan to demand the immediate release of the three young victims of the police repression in Jebha. 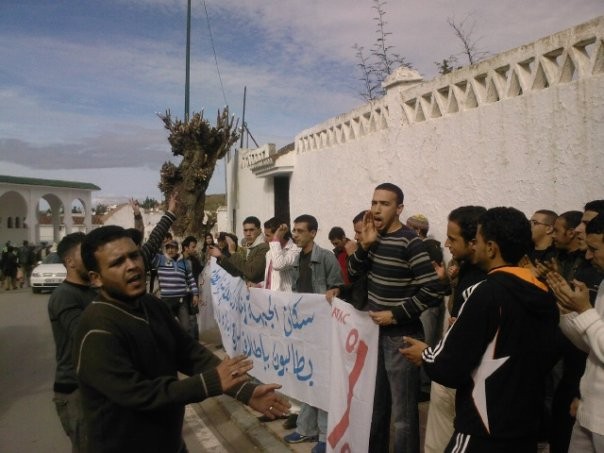 Apart from the families of the young men, there were also activists present from the Moroccan Human Rights association, AMDH, from the Association Nationale des Chômeurs Diplomés (the unemployed youth association), members of ATTAC, other left wing militants and many ordinary citizens.

Despite the continuous postponement of the date and hour of the trial the supporters of the Jebha youth succeeded to bring together many people.

The banner demanded the immediate release of the detainees. We chanted slogans of solidarity with the arrested youth and raised the demand that representatives of civil society should be present during the trial.

At the end we were informed that the trial was again postponed until Thursday, 28th of January. The request for immediate provisional release introduced by the lawyers was rejected.

The three young men: Yassin Bazi (19 years), Mohamed Zatev (21 years), Mohamed Said Oorjagl (20 years) were arrested on Monday, 11th of January 2010 following their participation in the protest movement against the deterioration of the living conditions in Jebha and the region. They have been charged with insulting a public official, damaging public property, causing the loss of property of others etc.

We need them to be freed as quickly as possible. They have been in jail already for two weeks without the slightest trial.

We ask the international youth and workers movement to send us letters of protest and support before next Thursday, 28th January.

Please send the messages to: contact@marxy.com

See more photos of the demonstration.