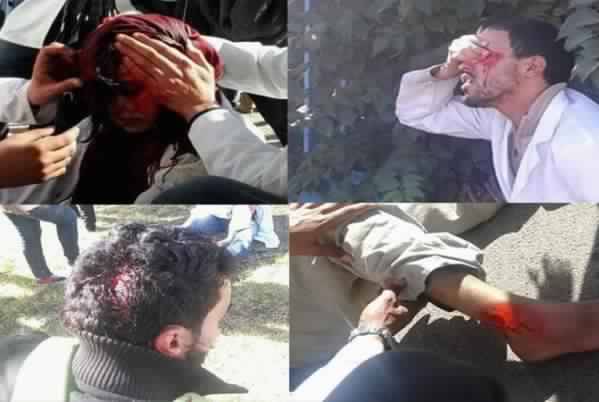 This report was originally sent to us on January 14th as the movement of the trainee teachers in Morocco was beginning. Since then, the struggle of trainee teachers against the decrees has continued. In response to the intransigence of the government, the National Coordination of Trainee Teachers called for a national march in Rabat on Sunday, January 24th.

Immediately after the call for the protest was published, the government threatened that it would not allow them to organise and that it "will take all necessary measures to prevent it", that is, they threatened repression. Rather than leading the teachers to back down from their decision, it increased public sympathy for them. The march became advertised and other groups joined it. It was a great success, with more than 100,000 teachers and sympathizers demonstrating.

On Thursday, January 7th, trainee teachers in Morocco came out simultaneously in regional protest marches. They were implementing a decision of the National Coordination of Trainee Teachers in Morocco, demanding an end to the following decrees: Decree 2/15/588, which separates training from recruitment [ie. students are not guaranteed jobs], and decree 2/15/589, which reduces the basic salary of trainee teachers in the central areas from 2450 to 1200 dirhams.

The marches were peaceful and the teachers unarmed, except for their vocal chords and their determination. They exercised, with the utmost discipline, their right to express their legitimate demands. But the dictatorial regime had a different opinion. It launched the forces of repression with clear orders to come down on the teachers brutally and without discrimination. Their orders were to target the head and face - the face in particular - terrorising and torturing the protesters to the utmost.

Dozens were left wounded following the brutal attack, some with serious injuries for which they are still undergoing treatment. According to a report published by the Moroccan Association for Human Rights, the outcome was as follows:

1. Inezgane: the repression in front of the Centre of Education has led to about one hundred injured, fifty cases have been transferred to the hospital.
Ms. Lamia: a fracture in shoulder, a fracture of rib cage, fracture in face - requires a cosmetic procedure.
Mr. Alkhumar: fracture of the spine requiring surgery, partial loss of sight.
A pregnant teacher: suffered haemorrhage.
Many Injuries to the head area (between seven and ten stitches)
Many Injuries to the legs and shoulders.
Several cases of loss of consciousness.

4. Casablanca: forty cases
Fracture in the arm area
Fracture of the leg area
These assaults on the teachers by the police were, according to human rights associations, in addition to insults, verbal abuse and degrading treatment.

What happened on Thursday was a crime by any standard. But it did not stop there, rather the response of the government poured further salt on the wounds. The statements of the officials following the massacre were filled with utmost of insolence and provocation. Prime Minister Benkirane expressed his solidarity with the police forces "who lead the mission" and called on the youth of his party, not to show solidarity with the abusive teachers.

That is indeed the logic of the dictatorial Moroccan regime. The regime does not care about the sanctity of the bodies of its citizens, nor for their rights or dignity. It is the logic of tyranny, despotism and barbarism. They shed the blood of the defenceless in the streets for no other reason than that they were demonstrating peacefully. Then they contemptuously, cynically and arrogantly proceed to ridicule their suffering and wounds.

The popular response was a wave of indignation against police brutality. Broad solidarity was expressed by layers such as teachers, workers, students, street vendors, activists, trade unionists, radical intellectual democrats, among others.

The aim behind the manner and force of this brutal repression is to invoke fear in the hearts of the trainee teachers. They are determined to shatter their morale and pressure them to stop the struggle. In addition, it is a bloody message directed at all other layers of the Moroccan people - workers, students, and others - that if they dare demand their rights, or stand up to the policies of austerity waged by the ruling class and its state, that they will suffer a similar fate.

However, the repression had the exact opposite result to that intended. In spite of their severity, they did not hurt the morale or the militancy of the student teachers, but only produced a wider popular support for them, fostering a spirit of defiance.

Horror moves to the other camp

The regime is now in major a dilemma. If repression does not produce the desired result - the  terrorisation of the masses - then the fear and horror will change camp and haunt the opposite side: the side of the ruling class and its state.

Indeed, immediately after the crackdown, the call was made to organize a protest rally in front of parliament on Sunday, January 10th. It denounced the repression and demanded a response to the teachers call to repeal the decrees. The rally of the teachers was a resounding success. The state was unable to react.

That same dictatorial regime which broke the bones of the teachers on January 7th, shedding their blood in the streets, is the same one which, on January 10th was retreating before the eyes of the angry crowd in front of parliament. This is not because it suddenly swallowed a dose of democracy, but only because it was terrified that any provocation against the protesters would have dire consequences for the regime.

Continuing the solidarity with the teachers and popular anger against the dictatorship, Monday, January 11th witnessed protest rallies in the city of Beni Mellal. The rally, which turned into a mass march, is unlike anything the city has seen since the February 20th movement in 2011. The powerful slogans which were raised not only condemned the treatment of the teachers and demanded the repeals of the decrees, but moved on to emphasise the rights of the people to good, free education, alongside other economic and political demands.

Once again, the forces of repression were mere bystanders. They tried not to do anything to provoke the people. They know very well that, given the combustible situation of accumulating unemployment, poverty and oppression, any provocation could lead to an angry explosion.

Who has won and lost at this point? The answer to this question is very clear. Fear has moved to the other camp. Despite all what has been achieved so far, the worst days of the ruling class are yet to come.

Slogans to continue the fight

Benkirane explained recently, that he would not back down on the decrees, even if this led to the overthrow of his government. We are also not ready to give up our right to employment, and the rights of all those toilers who sympathized with us, who stood by us in our time of need and expressed their love and solidarity with us, as well as their anger against what we are exposed to. Down with the government! Let our motto be down with the government and dissolve the parliament, which produced this government!

Moreover, the crime of attacking the protesters must not go unpunished. The blood which was shed must not be without a price. All the perpetrators of the serious injuries which threatened the physical and psychological well-being of the teacher trainees, must be held accountable. It is necessary to put on trial all those who gave the orders, and those who carried them out.

Who is the real enemy?

It is clear that the Islamist government has completely lost its popular appeal. Benkirane was dancing four years ago because of the electoral landslide against his opponents. Now he has reached rock bottom. That was clearly evident in slogans during the rallies, in debates on social networking, and in the discussions in popular Cafes, students’ seminars, and other places.

For decades, the Islamists have managed to win the sympathy of broad layers of the masses. They played the cunning role of "radical opposition", and hypocritically condemned the apparent social injustice and corruption of the ruling class.

Then it was difficult to expose them. That is because the conflict against them often took the form of mere intellectual struggle. But the masses do not learn from books, intellectual debates or through theoretical discussions and seminars. They learn through concrete reality.

As Marx explained, for any given phenomenon to pass away, it must first be fully realised. Indeed, in order to to overcome the period of confidence in these political currents (at least some of them) it was necessary to test their ideas in the real world. A few years of experience was enough to expose them in the eyes of the popular masses, not only in Morocco, but also in Egypt, Tunisia and other countries.

They have demonstrated their reactionary nature. They are nothing more than another version of the parties of the ruling capitalist class. They apply the same policies, practice the same methods and serve the same interests: the interests of big capital.

A few years of experience of Islamism in power was not a heavy price to pay for the masses to reach this historical conclusion. That is what the broad layers of the masses have reached now. They understand that they are their enemies.

But this conclusion is merely one side of the coin. The other side is to know which class is benefiting from the policies that the Islamists, the "secularists", and all other official parties are applying. Let us be objective, Benkirane, his party and government, are nothing but instruments in the hands of a particular social class, serving its interests and defending a specific social system.

It is not Benkirane as a person nor his government and his ministers alone who benefit from applying the two decrees. Separating training from employment, the reduction of grants, and other austerity measures implemented by the current government, are measures in the service of the capitalist class and the capitalist system.

Benkirane and his government are not ruling Greece or Spain, Tunisia or Egypt. Nevertheless, all these governments, in their different shapes and forms, "left-wing" and right-wing, apply the same policy: the policy of austerity, cuts, privatization and attacks against the social gains of the workers. They are all defending the same interests: the interests of the bankers and major domestic and international companies.

The capitalist class and its system are the real enemies. That is what we must understand, and explain to anyone who wants to understand. We must uproot them if we want to struggle effectively against the origins of the horrors and injustices that we, the workers, poor peasants and industrious youth, live with.

Of course it is necessary to struggle against all forms of exploitation, and all forms of attacks, whether they be large or small, no matter how partial and limited. But at the same time we must have a general perspective and scientific understanding of the nature of the enemy, as well as a programme which responds to both the immediate needs, as well as the ultimate goal.

Deep-rooted problems require radical solutions. If we want an alternative to the policy applied by the current government, and all other capitalist governments, we must struggle for the overthrow of the capitalist class itself. We have to fight for the confiscation of the keys of the economy and power, by the working class, to build socialism.

Original: Morocco: Crime and Punishment - repression of the march of the trainee teachers

The comrades of the IMT in Morocco are participating in this movement. We ask all our readers and supporters to express their solidarity against the repression of student teachers. You can do this by making photos with posters of students, teachers, trade unionist showing their solidarity and by publishing them on social media.

Please send messages and pictures to:

Please also publish your images on the Facebook page of Marxy.com: https://www.facebook.com/marxycom