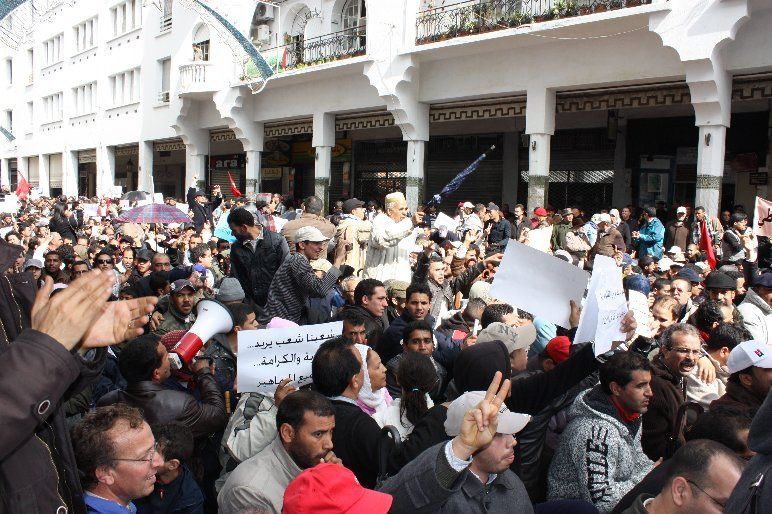 The Communist League of Action, the Moroccan section of the International Marxist Tendency, has issued the following statement about the February 20 demonstrations expressing its stance on the violence that followed the demonstrations and the wave of repression suffered by the Moroccan masses. One of their comrades was also arrested and brutally beaten by the police, suffering serious injury and ended up being hospitalized.

Following the call made by a group of young men and women on social networking sites for demonstrations on February 20 against tyranny, exploitation and oppression which was supported by a group of leftist organizations, trade unions, and progressive associations (some of the fundamentalist currents joined at the last minute), the masses of the Moroccan people in all parts of Morocco and Western Sahara went out in great numbers, exceeding 50,000 in some cities, in demonstrations composed of workers, students, unemployed and marginalized youth, men, women and even children.

The February 20 demonstrations took place in a wonderful atmosphere of popular militancy showing the great potential energy stored in the depths of the masses. The Communist League of Action, wherever it was present, stood side by side with our toiling people and the rest of the progressive left-wing currents. So far, we have had one of our members detained in the city of Fez in a serious condition due to the brutal torture he suffered at the hands of the forces of oppression who attacked students at the University of Mohammed bin Abdullah in Fez.

In front of this great tide of struggle, the dictatorial monarchical regime found no other response but to mobilise its gangs of thugs who went on the rampage vandalizing buildings, looting, and assaulting the demonstrators right in front of the police. They would have succeeded in breaking up the demonstrations if it had not been for the determination of the protesters in fighting back and reinforcing their protest. Some cities witnessed angry youths breaking windows of all that symbolizes exploitation, oppression and injustice to them. They burnt some police cars and stations, banks and major corporations, etc. This was exploited by the forces of repression to justify their campaign of killing and arrests against the masses, and was also used by the bourgeois media to launch a frenzied campaign against the demonstrations.

We declare our condemnation of the campaign of brutal repression and barbaric vandalism committed by the thugs and secret police of the regime, and the campaign of terror waged against unarmed innocent people and small shops. We understand the reaction of the angry youth against the police cars, stations of torture, and the symbols of tyranny, corruption and exploitation. We strongly condemn the campaign of the bourgeois media against the masses who defended themselves against the brutal repression by any means available to them such as stones and bottles, etc. We also affirm that we back the violent resistance of the masses against their enemies. We also call for its development and organization within the framework of committees elected in the slums, factories, and universities, armed and under the control of the masses, for self-defense and to respond to every assault by the repressive apparatus of the monarchy and its thugs, and protect public property, demonstrations and neighborhoods.

We also announce the following: