Canada
Share
Tweet
On May 29th approximately 45 people attended a round-table discussion at the Simon Bolivar Cultural Centre in Montreal, Canada, with Celia Hart and Jorge Martin, organized by the International Marxist Tendency on "Permanent Revolution and Trotsky's ideas in Venezuela and Cuba."

On May 29th there were approximately 45 people present at the Simon Bolivar Cultural Centre in Montreal, Canada, to attend a round-table discussion with Celia Hart and Jorge Martin. This event was organized by the International Marxist Tendency and was entitled "Permanent Revolution and Trotsky's ideas in Venezuela and Cuba." Cuban Trotskyist Celia Hart and also Jorge Martin, a leading member of the IMT and the Hands Off Venezuela campaign international secretary, led the discussion. 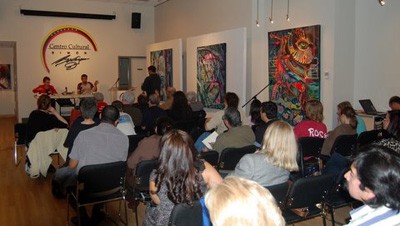 The event started with a short interview of Celia Hart by the secretary of the Société Bolivarienne du Québec, Emerson Xavier da Silva. He asked her many questions about her background and the relevance of Trotsky's ideas in Cuba today, most notably the theory of permanent revolution. The event was then turned over to open discussion which lasted for 3 hours, with many good questions asked.

Jorge explained that there is a renewed interest for the ideas of Trotsky in both Cuba and Venezuela. He explained how the Frederick Engels Foundation had launched Trotsky's The Revolution Betrayed in Cuba at this year's Havana Book Fair. This is the first time that a book by Leon Trotsky has officially been presented in Cuba and it was received by a packed meeting of over 100 Cubans. The book was a complete hit with all of the copies selling out within a short period of time. Jorge also mentioned the fact that the same thirst for the ideas of Trotsky is present in Venezuela because of the development of the revolution. He explained how last year in Venezuela there was an official meeting to commemorate Trotsky's assassination on August 20th, the first time such a meeting was organized anywhere in the world, with the presence of Cuban Communist Celia Hart, Trotsky's grandson Estaban Volkov, as well as Ydalberto Ferrera and Ricardo Napurí. President Chávez himself has on a number of occasions quoted from Trotsky works and recommended the reading of The Permanent Revolution and the Transitional Programme.

Jorge went on to explain the meaning of the theory of permanent revolution, insisting that before the Stalinist degeneration this was the common conception amongst revolutionaries of the strategy for revolution in backward capitalist countries. The theory, first developed by Leon Trotsky as a result of the experience of the 1905 revolution, explains how in the epoch of imperialism the national bourgeoisie in backward capitalist countries can play no progressive role and therefore only the coming to power of the working class can solve the problems of the national democratic revolution. But by coming to power they also pose the socialist tasks of the revolution, that is, the expropriation of that same ruling class which always sides with imperialism. However, socialism cannot be built in one country and the victory of the workers in a backward country can only be sustained if it becomes part of the world socialist revolution.

Jorge explained how this was precisely the strategy advocated by Julio Antonio Mella, one of the founders of the Cuban Communist Party, when he said: "In their struggle against imperialism—the foreign thief—the bourgeoisies—the national thieves—are united against the proletariat, the good old cannon fodder. But they end up understanding that it is better to form an alliance with imperialism, which at the end of the day pursues similar interests." The founder of the workers' movement in Peru Mariátegui also defended a similar perspective in relation to Perú, where he said, neither the bourgeoisie nor the petty bourgeoisie can play a progressive role. It was only later, with the Stalinisation of the Communist Parties in Latin America that the criminal theory of stages was adopted. This led the CPs of the region to support the so-called "progressive wing" of the ruling class, including the Cuban Peoples' Socialist Party entering into the Batista government of 1942 with two ministers.

The implication of the theory of permanent revolution today was that the Venezuelan revolution needed to be completed, breaking with capitalism, as opposed to those in the Bolivarian movement who talk of a progressive and productive section of the ruling class with alleged "national interests".

Celia explained that since the fall of the USSR there has been a new interest in the ideas of Trotsky. She mentioned the legacy of Che Guevara as being one of internationalism, opposed to that of the Stalinist theory of "Socialism in One Country" and peaceful coexistence. She said that spreading the revolution has always been part of the Cuban revolutionary tradition, mentioning the Cuban internationalist missions in Africa and the sending of Cuban doctors abroad (including an offer to send doctors to New Orleans after hurricane Katrina hit, which was refused) as just one of their many efforts to build solidarity between the oppressed peoples of different countries.

Criticising those who call themselves "Trotskyists" but refuse to defend the Venezuelan revolution, Celia quoted the position that Trotsky took when Mexican president Lazaro Cardenas nationalized oil in 1938. Trotsky said that it was the duty of all revolutionaries to defend that decision (without necessarily supporting all the actions of Lazaro Cardenas or abandoning their own views), because that conflict was part of the international class struggle.

She said that for her, the two most important revolutionaries were Leon Trotsky and Che Guevara and that reading both of them side by side, one could see many points that coincide between the two.

Explaining the current situation in Cuba she insisted that the Cuban revolution owed nothing to the market and that every time they had overcome problems (like during the special period after the fall of the USSR) they had done so through revolutionary methods.

Answering a question about the existence of many different groups that call themselves Trotskyist, Jorge explained that one should not look at how organizations label themselves so much as to what positions they take on the most important revolutionary events of the day, the Venezuelan and Cuban revolutions, the question of workers' control and the occupied factories, the imperialist war in Iraq, etc. It is the attitude towards these events that put revolutionaries on the same side of the barricade, he said.

All in all this was a very successful event. There were many notable people present including the Venezuelan Consul, the Cuban Consul and well-known author on Latin America James Cockcroft. The discussion was very lively and engaging and many people showed interest in getting involved in spreading the revolution to Montreal and the rest of Canada.

Twenty years ago, it would have been impossible to have a discussion like this with consular figures from countries like Cuba and Venezuela. The collapse of Stalinism in the Soviet Union and the beginning of the Venezuelan Revolution have opened up vast opportunities for Marxists.