There has been no levelling off of the global economy, as economists predicted. Although industrialisation has expanded to lesser-developed countries, it has generally been along lines determined by global corporations based in advanced capitalist countries. From colonialism, we have moved into the age of multinational corporate domination.

We live in an age of giants. Unchecked, they stride across the earth consuming much that lies in their path, leaving behind them great trails of destruction. This is not pre-history I am describing, but today’s era of monopoly capitalism. There has been no levelling off of the global economy, as economists predicted. Although industrialisation has expanded to lesser-developed countries, it has generally been along lines determined by global corporations based in advanced capitalist countries. From colonialism, we have moved into the age of multinational corporate domination. The world’s largest retailer, Wal-mart, raked in $405 billion in revenue last year – that’s enough to buy Bangladesh! They have over 7,500 stores world-wide and employ 2 million people. Cargill, the world’s biggest company in the food industry, is larger than the economies of two-thirds of the world’s countries.

The world economic crisis has claimed a few victims, especially in the dodgy financial sector, such as the Lehman Brothers, but the process of monopolisation is continuing unabated. T-Mobile have just announced they’re to merge with Orange to create the UK’s largest mobile phone service provider, cornering 37% of the market. Japan’s Panasonic has just bought Sanyo, giving them 38% of the rechargeable batteries market. America’s Pfizer has just bought Wyeth for an amazing $68 billion, making the world’s number one pharmaceutical company even larger. According to the Times Rich List 2008, in the UK alone the top 200 companies have grown from a total value of £76 billion to £280 billion in only ten years. This has given rise to a rich elite unprecedented in history. Britain’s 50 richest people are collectively worth over £450 billion, up 26% from last year. The world’s richest 50 individuals are worth over £720 billion, up 22%. 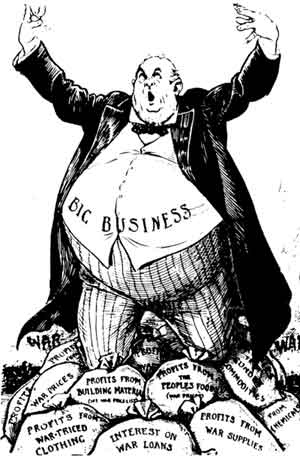 Capitalism hasn’t always been like this. Throughout the 1800s, it was mainly dominated by small family-owned firms. In 1830 the biggest company in the world was the Cyfartha iron company, worth about $2 million, with 5,000 employees. A hundred years later the biggest company, U.S. Steel, was worth $2.3 billion, and employed 250,000 people. Today, the world’s largest company is the energy producer Royal Dutch Shell. It raked in a staggering $458 billion in revenue last year.

Most industries are now dominated by just a few massive companies, referred to by economists as ‘oligopolies’. We call them monopolies in the sense that they collectively dominate the economy as a whole. In Britain, the top 100 manufacturing companies were responsible for 47% of all output in 1948. By 1968, that had grown to 69% (‘Industrial Organisation’, George Joll & Link 1992). Today, it is estimated to have grown even further to around 85%. So, what is causing this unprecedented concentration of power and wealth?

As small companies compete, you naturally get market leaders. As these companies get larger they become more efficient at producing goods and services. They invest in mass production techniques in order to produce goods more cheaply than their competitors. They buy raw materials at cheaper prices because they buy in bulk. They expand specialization amongst their workforce. They also copyright and patent their work, preventing rivals from using it. This is known as economies of scale. The bigger you get, the easier it is to make money. Smaller companies cannot compete. This is called a barrier-to-entry. If you wanted to compete with Ford motor cars, for example, just one car plant would set you back around $500 million.

When two market leaders merge they achieve massive economies of scale. This forces others to merge in order to compete, leading to ever greater concentration. Monopolies often buy their rivals. Rupert Murdoch’s News Corp, the world's second largest media conglomerate (often referred to as the ‘Evil Empire’), has just bought out competitor Floorgraphics, a company that was actually suing the media giant for anti-competitive behaviour. That’s one way to win a court case! In the UK, throughout the second quarter of 2007, companies spent over £9.5 billion on mergers and acquisitions, and a further £51 billion on mergers abroad.

Giant corporations have learned that competing against each other on the basis of price damages all parties. So they have learned to ‘cooperate’. Prices are set as high as possible by the market leader. Competing corporations then round their prices up in tandem, so they all rake it in. Competition between companies is still fierce, but it’s now waged, for the most part, with advertising and marketing, not prices. Companies pour vast amounts of money into product differentiation in order to convince you, for instance, that Daz washing up powder is better than Ariel. Consumers benefit less today from competition between capitalists than ever. All we get is more advertising.

Competition for profit means price wars do sometimes occur, often with workers footing the bill. Tesco, which has 30% of the market, and Asda, with 17%, have hit the news recently for their ‘banana war’. In an attempt to attract customers they’ve repeatedly slashed their price. We know from bitter history that costs get passed down the chain. Asda funded its 2002 banana war on the back of a global deal with Del Monte. Fair trade groups documented the conditions that were behind that price. In 1999, Del Monte sacked all 4,300 of its workers on one of its biggest plantations in Costa Rica, which supplies much of the UK. They then re-employed them on wages reduced by 50%, on longer hours, with fewer benefits.

So monopolies also dictate the price at which they buy from producers. This has had a devastating impact on Britain’s farmers. They have been bullied by supermarkets into supplying at ever cheaper prices. According to Defra, 63% of British farms are unable to make sustainable profits. The number of dairy farmers in the UK has halved in a decade to 17,060, and farmers are quitting at an average rate of 14 a week.

There are some industries where corporations meet secretly to conspire to fix prices. These are called cartels. These are technically illegal, but the law is usually impotent. The Organization of Petroleum-Exporting Countries (OPEC) is perhaps the best-known example. OPEC meets regularly to decide how much oil each member of the cartel will be allowed to produce, in order to keep prices and profits high.

In 2004, when demand was climbing, a number of UK energy companies held back supplies because of "technical clauses" in the supply contracts, which led to a price rise that cost British customers £1.4bn. Electronics manufacturers Hitachi, LG, Chunghwa, and Sharp have all been caught recently in cartel price fixing rackets involving LCD screens. Another well-known cartel was the International Coffee Agreement (ICA).

High prices have a devastating effect on public services, such as the NHS. A 2005 report by the Office of Fair Trading found that cartel pharmaceutical companies are overcharging the NHS by as much as 10 times more than other treatments considered to be as effective. This is estimated to be costing the NHS hundreds of millions of pounds. In 2002, the NHS lost £100 million after two drugs manufacturers formed a cartel to fix artificially high prices for the ulcer drug, ranitidine. In 2008, drugs companies were found guilty by the Serious Fraud Office of overcharging the NHS for antibiotics and anti-clotting drugs. It is predicted that GlaxoSmithKline alone will make billions from the sale of Swine Flu vaccines, which it is selling at six times the cost of production. The company has already sold 60 million doses to the UK Government plus a further 100 million to Europe and the U.S.

Some multinationals use ruthless tactics to drive out competitors. The U.S. coffee chain Starbucks uses a tactic known as ‘clustering’. They’ll build several cafes right in the same area to obliterate competition. This costs a lot of money, but they can afford it. They coined in $181 million in profits last year. They even use a strategy called ‘predatory real estate’. They pay more than market rate rents to keep competitors out of a location. David Schomer, owner of Espresso Vivace in Seattle, says Starbucks approached his landlord and offered to pay nearly double the rate to put a coffee shop in the same building.

The company now has over 16,600 stores worldwide. There are about 115 Starbucks within 3 miles of London’s Bank of England, thought to be the world's greatest concentration. They now have about 30% of all coffee shops in the UK.

Monopolisation of the financial sector has had a profound impact on the world’s economies. At the end of 1985 there were 18,000 banks in the United States. By 2007, this had been reduced to just 8,534, and since then has dropped further. As recently as 1990, the ten largest U.S. financial institutions held only 10% of total financial assets. Today they own 50%. The largest five U.S. banks now hold $9 trillion in assets. (Monthly Review Oct 2009).

As leading financial analyst Henry Kaufman stated: “In a single generation, our financial system has been transformed. It has melded together rapidly into a highly concentrated oligopoly of enormous firms… When the current crisis abates, the pricing power of these huge financial conglomerates will grow significantly.” We are living through an epoch where the concentration of the world’s wealth and power has reached proportions never experienced before in human history. As we have tried to demonstrate, this is not an anomaly. The tendency of early capitalism to develop into its monopolistic form is inherent in the system; a market economy based on private ownership and competition for profit. But economic tendencies alone are not sufficient to explain the extreme degree of monopolisation. Political forces have also been at work to ensure the continued domination of big business over parliament and state. This will be the subject of my next article.