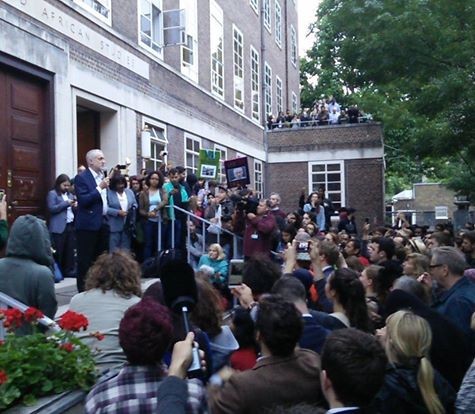 As the Blairites continue to plot their coup against Corbyn, mass meetings and rallies of Corbyn supporters have begun to sprout up in city after city across the country. A rebellion of Labour members against the careerists in the Parliamentary Labour Party has begun.

We publish here a couple of reports from recent meetings and rallies that give a flavour of the mood of anger that is growing everywhere.

Last night, Socialist Appeal supporters attended a hastily-convened rally outside SOAS for Jeremy Corbyn. Having cancelled an earlier rally due to 'excessive demand', Momentum Youth organised this rally at a few hours' notice. The impressive turnout of around 400-500 meant that the rally had to be moved outside to accommodate everyone.

Amongst the speakers were Matt Wrack, John McDonnell, Diane Abbott, and Jeremy Corbyn himself, as well as various student activists, a young teacher and a junior doctor. All the speakers struck a defiant tone, reiterating that Jeremy would not be bullied into standing down, and describing some of the personal abuse Jeremy, John and others had had to endure from their fellow MPs. John described the PLP meeting as a 'lynch mob without a noose', and it's clear there's no love lost between them. Jeremy laid out some of the policies he planned to fight for: rent controls and a house-building programme; reversal of NHS privatisation; a programme of industrial development in the North and elsewhere; and policies to tackle anthropogenic climate change.

At one point, Corbyn was heckled by a Blairite plant in a sharp suit (who has since been identified as a Lib Dem candidate), who had been hovering on the edge of the rally, regarding his role in the Remain campaign. This actually drew out the best part of his speech, where he explained that decades of Tory and New Labour austerity had laid the basis for the Brexit vote amongst swathes of the working class. Needless to say, the assembled media rushed straight to the heckler, and these creatures of the 1% gave him top billing on their report.

Jeremy and John deserve enormous credit for standing up to the tirade of personal abuse they're facing, and have shown enormous reserves of strength and courage not to buckle. It is clear that the right-wing expected them to throw in the towel, and are now desperately scrabbling around to find a candidate to face him in an election. The candidate, likely Angela Eagle, will be a sacrificial lamb, as the Blairites prepare to split the Party.

The calling of the rally was an important step forward in mobilising a fightback of the youth against the coup. However, what was lacking was a clear, militant call to arms for the assembled crowd. Speakers were limited to calling on people to join the Labour Party and recruit their friends - not once was mentioned the need to organise to take over the party, including fighting for deselection of the right-wing MPs. There is a clear mood amongst Jeremy's supporters to fight the Blairites and defend the movement, but Momentum need to give a clear lead. From talking to people after the rally, it is clear that people are looking for precisely such a lead, for an organised fightback. The Blairites and their ovine co-conspirators have proven their utter contempt for the hundreds of thousands of Party members who elected Jeremy, as well as their utter lack of political understanding. (As if the best way to attack Jeremy were to deride him as insufficiently ‘pro-European’ to an electorate who just voted to leave the EU.) The time for compromise and conciliation is over: we must go on the offensive.

Hackney Momentum held an emergency meeting on Wednesday 29th June so that local members could discuss the crisis in the Labour Party and agree a way to defend Corbyn. The meeting, called with only two days notice, gathered over 100.

It felt like a meeting of the Hackney Soviet! Person after person from all over the borough got up to speak; everybody expressed seething anger at the PLP. One topic rang out more than any other - deselect them! This demand was overwhelmingly popular and was raised by many, many speakers. The meeting was a huge success in showing how many left wingers there are, and just how militant they are!

The meeting understood that the situation is extremely fluid and was an important opportunity for activists to share practical ideas. In particular, the need to mobilise people to either join the Labour Party, or if already in it, get active and organised, was clear. Comrades exchanged information about upcoming Labour events and what the balance of forces is in them. Plans were drawn up for how we can ensure that the local parties represent the pro-Corbyn membership. A note of urgency rang out as our local MP, Meg Hillier, just that day wrote to members explaining that she supports the motion of no confidence in Corbyn.

One weakness to the meeting was that for all the practical talk, no clear decisions on action were taken. There is no clear leadership nor a clear local structure in which to move binding motions. This must be addressed - Momentum needs to become an organised force to guarantee Labour keeps Corbyn, keeps its name and goes forward with a socialist programme!