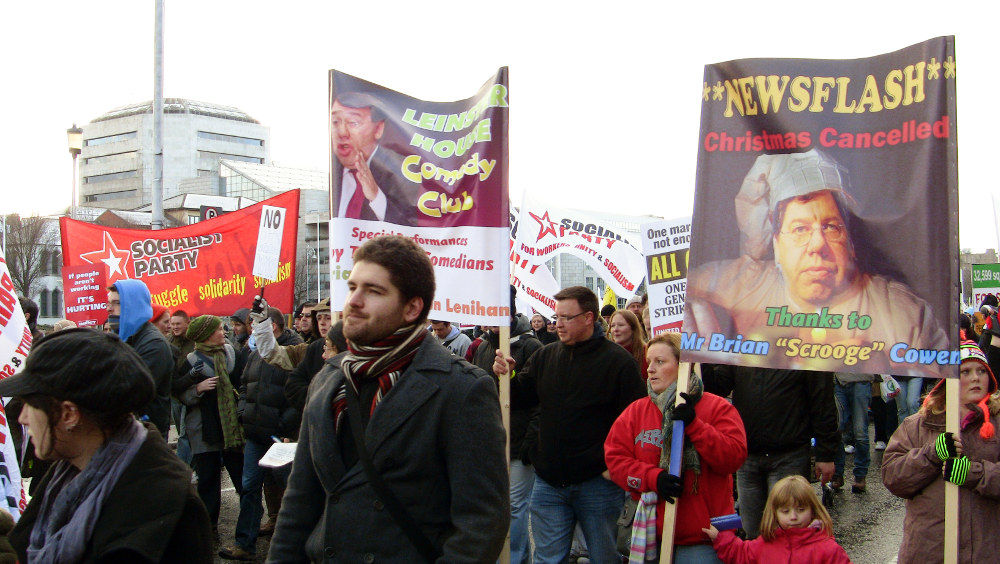 Who gains from the cut in the minimum wage proposed in the four year plan? Well, according to Brian Cowen it’s the very people who are on the minimum wage just now. As usual with Cowen, it is a question of denying what is abundantly clear to everyone else.

This is what Cowen said:

"It's not a question of saving money for the state. The whole idea is to keep as many people in work at a time when the trading environment is very difficult — we have to try and ensure a competitive economy."

The €1 cut in the minimum wage from €7.65 to €8.65 per hour will make a difference of around €35 - €45 per week for full time workers. It will mean a huge blow for low paid families and particularly part time workers, including a disproportionate amount of women. It’ll affect non unionised workers and young people also.

There’s something particularly Dickensian about announcing a cut in the minimum wage a few weeks before Christmas. The employers who would use this opportunity to squeeze the lowest paid workers in the state by slashing their wages could do with a visit from a few Christmas Ghosts armed with Trade union banners, placards and union membership forms.

There will be very few businesses in Ireland that will genuinely stay open because they can cut the minimum wage by 11%. And only a short sighted, doomed, right wing, lame duck politician, teetering on the edge of electoral oblivion would seriously think that the Irish economy could be mended on the basis of cutting the wages of the poorest workers...

But enough about Brian Cowen. The Chief Executive of the Irish Small and Medium Employers Association (ISME) Mark Fielding says that cutting the poorest workers wages will be “good for Ireland”. Hardly surprising for a man who makes his living working for the slave driving small businessmen thinking about (increasing) their profit margins at the cost of their workers.

But more importantly here’s what Economist Dr Peter Bacon, the man behind NAMA, said in July 2009:

"When you look at competitiveness indicators, I cannot avoid the conclusion that wage costs across the economy are too high and one way of regaining a modicum of the competitiveness we have lost would be for nominal wage cuts.

"Reductions in the order of 10 to 15 per cent is the kind of adjustment I am talking about, across the economy. I'm not sure if you can achieve compression; that is to say, leave minimum wages where they are and adjust down, and still get a return to employment growth in the economy. I think if you are going to be serious about achieving the kind of competitiveness gain that is required to address those losses, you cannot avoid a downward adjustment in all wages." (Irish Independent 21/7/09)

So Dr Bacon is of the opinion that minimum wages are too high so we will attack the poorest workers. But we’ll bail out the speculators and the big bankers because they need high wages and perks to motivate them. Such is the twisted logic of the Irish capitalist class and their mouth pieces.