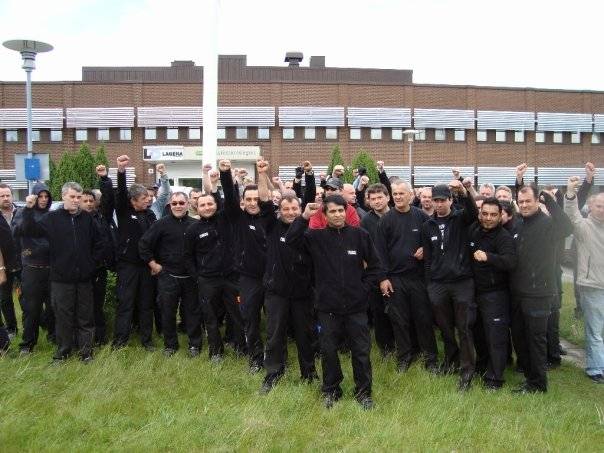 The left parties did badly in the recent EU elections in Sweden. Many on the left were disappointed. But within a week of those results a dispute broke out at the Lagena warehouse south of Stockholm. Lead by IMT member Patrik Olofsson, it has sent an electric jolt through society.

The results of the EU elections in Sweden left many on the left disappointed, there seemed to be very little opposition to the right-wing government. But to base one’s analysis of the mood among workers solely on an election poll is a mistake. Within a week of the results being declared the struggle of a group of workers at a warehouse south of Stockholm, and lead by IMT member Patrik Olofsson, has sent an electric jolt through society.

In the EU elections, the Social Democratic Party managed to get an even worse result than during the last election, and that had been the worst result since universal suffrage had been introduced in Sweden. The Left, ex-communist, Party vote collapsed. In the previous EU elections they had picked up protest votes against the then Social Democratic government. Now in alliance with the Social Democratic Party against the present bourgeois government, they have become practically indistinguishable. A coalition of ultra-left groups got a miserable result – less than the sum of the subscribers to their papers. In other words: gloom and doom all around.

However, workers at the Lagena warehouse did not let themselves be affected by the election result. When the employer had previously sacked 34 workers, and then replaced most of them with temporary workers, they had reluctantly accepted it. But this time, when the boss wanted to sack a further 33 of the remaining 120 properly employed workers, they decided to fight back. What was at stake was not just the jobs of 33 workers. This was nothing less than attempt by the bosses to use the present world crisis to break the union.

The union branch at Lagena had been painstakingly built up over many years. Through a series of struggles they had achieved conditions that were unique for warehouses. They were not going to accept that being taken from them lying down.

Lagena is wholly owned by Systembolaget, the state monopoly that sells alcohol to the public. The workers began their fight-back by organising several protests outside Systembolaget’s main office in the centre of Stockholm. Then they marched off to the headquarters of the LO, Sweden’s general trade union confederation for blue-collar workers. In a leaflet they distributed there, they welcomed LO chairman Wanja Lundby-Wedin home from Riva del Sole, LO’s fancy holiday resort in Italy. She had just spent a week there “inspecting” it with her husband. He had been allowed to stay there for free with her, because Wanja had not been aware that this was against the rules.

They asked for her support, but she sneaked out and disappeared in a taxi. However, a few LO bureaucrats (they actually presented themselves as such) did come out to talk to the workers, only to assure them that the LO, with its two million members and enormous financial resources, could “do nothing, absolutely nothing”. Now it was clear to all the workers that they could only rely on their own struggle.

And it was necessary to act fast. Midsummer was approaching. For those not familiar with Swedish traditions, Midsummer is one of the most important traditional festivities. This is when Swedes dance around a May pole pretending to be frogs, eat raw herring, and drink copious amounts of brännvin, Swedish vodka. If a strike was ever going to have a major effect it was now, a week before Midsummer. So, yesterday they all went out on a wildcat strike. 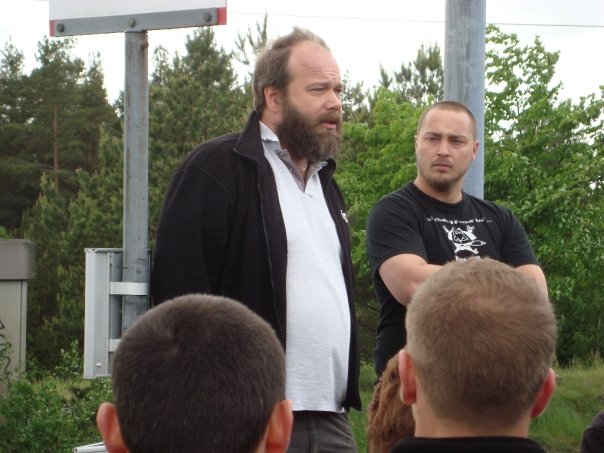 IMT member Patrik Olofsson is leading the strike It is worth noting that in Sweden wildcat strikes are illegal. Strikes are only allowed when there is no central contract between the unions and the employers, and then only after the LO leadership have approved it. The workers at Lagena have no income whatsoever when they strike and can expect heavy fines if the employers decide to take them to the labour courts.

Yesterday, the workers got up just after the crack of dawn (which is at about 3am in Stockholm at this time of year), drove to Lagena and parked their cars outside the entrances, blocking all trucks from going in or out. This is a completely new development for Sweden. At first the police was at a bit of loss as to what to do. But by two o’clock they had collected enough police together, about 40, to “negotiate” an agreement. The workers took a vote and lifted the blockade. But the strike continues.

Shortly after the workers at Lagena began their protests, the Swedish Marxist paper Socialisten, decided to initiate a solidarity campaign. A first meeting, held at a café with a sympathetic owner in Stockholm’s Old Town, attracted seventy from numerous trade unions, and the youth organizations of the Left Party, Social Democrats, and Syndicalists. Since then many have participated in leafleting outside of Systembolaget’s shops, in the blockade yesterday, sending solidarity messages, and collecting money. And on Wednesday, (June 17 we are organizing a national day of action in support of the Lagena workers. Already people in ten different towns have said that they will be handing out leaflets outside of Systembolaget’s shops.

Almost without exception, any worker that we have come into contact with has been enormously enthused by the struggle of the Lagena workers. “At last!” is a common reaction. The EU election results only tell one side of the story, below the surface there is an ocean of simmering discontent, just waiting to boil over. The left parties were not rejected in the elections because workers love capitalism, on the contrary. They were rejected because the leadership of all parties on the left failed to offer any real alternative. And now the Lagena workers are offering a real fighting alternative. This is a far cry from the union leaders who, as the crisis has begun to bite, have reached agreements with the bosses for workers to accept fewer hours and cuts in pay in exchange for a promise not to sack people.

Last year Antonio Betancourt, from the occupied Inveval factory in Venezuela visited Lagena and addressed a union meeting during his tour of Sweden. He was able to return to Venezuela with a substantial donation from union members at Lagena. Now Freteco, the organization of the occupied factories in Venezuela, has sent revolutionary greetings to the workers at Lagena. This was greatly appreciated. As any other international greetings will be. Send them to This email address is being protected from spambots. You need JavaScript enabled to view it., preferably in English or Spanish, but workers at Lagena speak a multitude of languages so it is worth sending the message in your native tongue too. And mention you heard of the strike through the pages of Marxist.com and Socialisten.