Mexico
Share
Tweet
The mood in Mexico is becoming angrier as more evidence is presented of the electoral fraud against PRD candidate Andres Manuel Lopez Obrador. The march that started all over the country yesterday is expected to meet today in five locations, Toluca, Querétaro, Puebla, Hidalgo and Cuernavaca, from which the demonstrators will make their way to the massive march on Sunday in Mexico City.

The mood in Mexico is becoming angrier as more evidence is presented of the electoral fraud against PRD candidate Andres Manuel Lopez Obrador. Three videos have been released this week, of which one shows PAN and electoral officials opening the ballot boxes and breaking the seals in the third district in Tabasco. After the scandal created by this, the Federal Electoral Institute gave the order that no ballot boxes should be opened under any circumstances, unless a full recount is ordered.

The PRD leadership is saying that ballot boxes are being opened in order to make the actual ballots match the fraudulent results that have been announced, by adding or subtracting votes. A second video released by the PRD shows someone wearing PAN colours stuffing a number of ballots in one ballot box. A third video shows the official count of the vote in a polling station in Puebla. After reviewing the 92 ballots, which had been declared null, 64 of them were found to be PRD votes.

On Wednesday July 11, more than 50,000 people started to march from the 300 electoral districts in the country. They are expected to meet today in five locations, Toluca, Querétaro, Puebla, Hidalgo and Cuernavaca, from which they will make their way to the massive march on Sunday in Mexico City.

Meanwhile, Elba Ester Gordillo, the head of the PRI parliamentary group and corrupt leader of the teachers union SNTE, was expelled from the PRI, deepening the crisis of this party. On Saturday, July 8th, at the mass rally in the Zocalo, the PRD released the recordings of a conversation between Gordillo and a number of PRI regional governors, on election day, in which she advised them that since the PRI was losing anyway, they should "sell what they had" (meaning the votes they had received should be sold to the PAN).

Here we publish two reports from the comrades of the Marxist Tendency Militante on their activities in the struggle against the fraud, and the extraordinary reception they are getting. These are just a small indication of the mood there is amongst the workers and poor in Mexico. 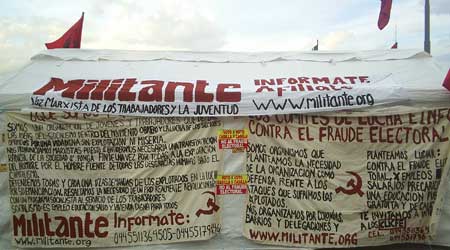 We set up our tent in the Zocalo yesterday, Wednesday July 11, which we are going to keep until Sunday at least. There is enormous enthusiasm.  Many people go to the tent looking for information, leaflets, etc. We are going to print 50,000 leaflets. Issue 151 of the paper should be ready today. We have printed 2000 copies, and issue 152 will be ready for Sunday, of which we will print 3000 copies.

We are organising assemblies in the neighbourhoods, with a turnout of 50 to 80 people at each meeting. The centre is in permanent effervescence, the phone does not stop ringing. We have already spent 25,000 pesos in propaganda this week (some 2,200 dollars). 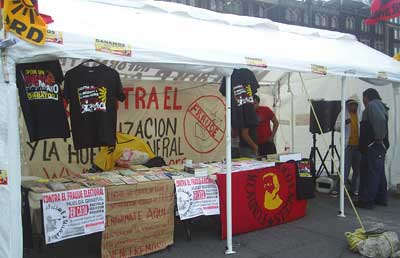 The paper is becoming better known; people come and buy two or three copies. People are giving us money. In the neighbourhoods money is being collected for the propaganda. We are distributing posters, and people take them and post them up next to the official PRD posters in their neighbourhoods.

We are going to go to the demonstration together as a block with a massive banner in the name of the "Coordination of Committees of Struggle and Information against Fraud". Probably the bureaucracy of the party will create their own coordination and we will participate as an organised group, not just isolated committees.

There is a lot of anger. Workers are full of anger. Calderón has announced a tour of the country. They might try to mobilise their people on the streets, we will see. Definitely the worker masses are more experienced, they are bolder. The 1988 fraud is fresh in their memories, as is the struggle against the impeachment. They are confident that another ‘88 cannot be allowed to happen and that if the impeachment was defeated, they can defeat the fraud.

The main question we are getting is, do you think they will listen to us? To which we reply that for that to happen a general strike is needed.

The PRD bureaucracy installed their own tent next to ours with a powerful sound system which drowns ours out, but they will not stay overnight. We will be there day and night as long as we think it is useful. 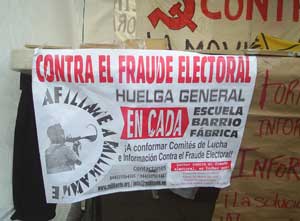 The tent is becoming the central headquarters of our intervention, where we have all the material. The office is permanently full of comrades organising banners, flyers, the paper, the website, the reports, the meetings.

In Puebla, where we already have certain influence, we had a meeting with about 100 workers.

Yesterday at our tent in the Zocalo we raised 1650 pesos in donations (150 dollars), 1000 pesos in the sales of books and documents (90 dollars), and in two hours we sold 250 copies of the new issue of the paper (which was folded and put together at the tent). 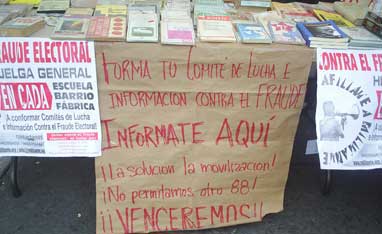 Yesterday there were 6 different neighbourhood meetings organised by us, with between 50 and 100 people each. We also participated in assemblies organised by the PRD officials (who have no idea of the scope of the movement). In one of their assemblies we were able to speak and we received an ovation: "these people know how to speak, unlike those (pointing at the bureaucrats)". Some women in the assemblies have proposed to prepare food and take it to the Zocalo for the comrades who are arriving from the regions.

The bureaucracy has organised a massive sound system in the Zocalo, and there is a permanent rally there, with people speaking on the open microphone. Most speeches have a strong class content, many unconditionally support AMLO (Lopez Obrador).

The tent is always full of comrades coming and going. There is no doubt that we will emerge extremely strengthened out of this movement. We are very united, everybody wants to help out. Amongst the comrades there is a strong feeling that our ideas are correct, that we have the best ideas in the world. The pickets at the embassies organised internationally are generating great morale in our ranks. The international character of our organisation is announced in a proud and confident way.

We expect to sell 800 copies of the paper today. Workers are taking bundles of the paper, paying for them in advance and taking them to their neighbourhoods to sell.