Germany
Share
Tweet
In mid-June the WASG and the Linkspartei.PDS will come together and form a new left-wing party, Die Linke. Hans-Gerd-Öfinger looks at the significance of this development and the perspectives for this new political formation.

A new united left party, Die Linke, will be formed in Germany in mid-June. After a (likely) successful and overwhelming outcome of the postal ballot by all members of the traditionally Eastern based Linkspartei.PDS (L.PDS) and the more Western based Electoral Alternative for Social Justice (WASG), both parties will dissolve themselves in simultaneous conferences in Berlin and then merge into the united party Die Linke the day after. With some 60,000 members coming from the L.PDS and some 10,000 from the WASG, this new party is the most serious political formation to the left of the Social Democratic Party (SPD) for generations. It has 53 Members of Parliament at present and won a share of 8.7 in the 2005 Bundestag (federal parliament) elections.

The PDS has existed since 1990. It was formed out of the remnants of the old East German Communist Party, the SED, when the old regime imploded. Having consolidated a mass base in the East since then, with structures and finances and lots of councillors, mayors, and MPs, however, the PDS has found it difficult to sink deep roots in the West where anti-communist moods still prevail. The arrival of the WASG on the political map since 2004, however, has made a difference.

The WASG was not originally set up as a separate party in 2004. When former Social Democratic chancellor Gerhard Schröder with his federal coalition government of SPD and Greens blackmailed the SPD into accept his anti-working class „Agenda 2010", the initial response was the formation of an opposition within the SPD which had the support of some 20,000 members, including many trade unionists, left Young Socialists and old lefts who were still around since the 1970s. Yet when the leaders of that spontaneous opposition, most of them MPs plus the national leader of the building workers´ union, refused to undertake anything to organise a well-structured opposition within the party, the whole thing collapsed again just as quickly as it had been set up. 8 months later, in early 2004, some other full-time trade unionists and SPD members in Bavaria took the initiative and set up what can be described in hindsight as the predecessor of the WASG. Being formed originally as a grouping of mainly disenchanted Social Democrats, many of them trade union full timers or shop stewards with influence and important positions in the unions, urging for a drastic change of course by the government, the SPD party apparatus quickly expelled their leaders. This triggered off the process of formation of a new political party which also attracted a layer of younger and older people who had no political history, as well as members of smaller political groups and sects.

The very young WASG stood candidates in the regional elections in North-Rhine-Westphalia (NRW) in May 2005, where the SPD was hammered in their traditional industrial heartland and lost the power they had held for nearly 40 years. The 2.2 per cent scored by the WASG in a federal state of 18 million inhabitants - virtually out of the blue and without any major funds - was seen as an encouragement, whereas the PDS only scored 1.1 per cent then. When Chancellor Schröder took the initiative to dissolve the Bundestag after his defeat in NRW, there was really no choice for both the WASG and PDS but to stand together and united in the early elections of September, 2005. 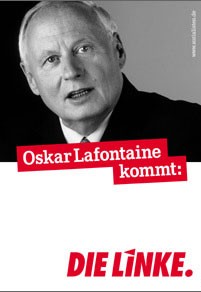 The PDS had suffered a demoralising defeat in the 2002 elections and (with two exceptions) lost all their seats in the Bundestag. Now renamed L.PDS and strengthened by some fresh blood from the WASG on their slates, the party returned to the parliamentary platform. An important factor in this comeback was the personality of Oskar Lafontaine, former SPD chairman (1995-99) and ex-finance minister (1998-99) under the Schröder government who had abandoned all his political jobs in 1999 in protest against Schröder´s shift to the right. He pressurised the PDS and WASG into unity after May, 2005.

Lafontaine is the parliamentary leader now (together with Gregor Gysi) and will be elected as one of the two chairmen of the new party in June. Although most people in the country think that both parties have been united since 2005, the painful and somewhat complicated bureaucratic process of unity has taken somewhat longer. From the first day on in May 2005, the supporters of the Marxist journal Der Funke have argued in favour of unity since there was and there is no real difference in the political contents of both parties and since the German labour movement does not reward endless series of political splits but rather favours unity.

Given the fact that nationally the present Grand Coalition of Christian Democrats and Social Democrats under Chancellor Angela Merkel is carrying out attacks on the health and pensions fronts and given the fact that the "reforms" of the unemployment benefits have caused massive impoverishment and have not created the promised jobs, there will be some room for the left party to grow. Yet on the other hand, especially the involvement of the L.PDS in the local government of the city state of Berlin, one of the 16 federal states, is a cause of concern for many in the new party. The PDS has been in coalition with the Berlin SPD since 2001 and there is discontent about their local policy in favour of cuts in public expenditure and privatisations. For instance, they have recently decided to privatise the traditional local savings bank in Berlin.

So while the moderate wing in the new party gets its strength from many full-time politicians in the East, there will also be left currents who regard themselves as a counterweight to those who seem to have forgotten their political principles once elected into public political positions.

So the majority in the new party is clearly opposed to any privatisations as well as opposed to any military intervention by German troops. There will also be some reference to the aim of a socialist society and the takeover of the commanding heights of the economy in the party programme. Having active trade unionists in their ranks up and down the country, the new party will have a good chance to intervene in union events and industrial struggles and find an echo there. In the Saarland, Lafontaine´s home base with just over a million inhabitants, the united party will have some 1000 members. A number of people all over the country have a wait and see attitude and have indicated that they will join the new party once it is successfully formed. It remains to be seen, however, whether rumours come true and some dissident MPs from the SPD parliamentary party will really change sides and join Die Linke.

The internal political debate and conflicts will certainly intensify as the involvement in the Berlin city government increasingly becomes an Achilles' heel for the party. On the other hand, sections of the new party are also flirting with the idea of making the party fit for involvement in a future federal government after 2009. So debates between reformist and more radical ideas will take place in the party right from the beginning.

While the ideological shift to the right in the SPD goes on, this new party will have an enormous chance for intervention in the movement and growth. It will be the place for political and theoretical debates and must resist the temptation of taking over government positions and betray the political legacy. Genuine socialist and revolutionary traditions in Germany are represented by fighters like Rosa Luxemburg and Karl Liebknecht, the anniversary of whose death in 1919 is publicly commemorated by the party and by tens of thousands every January. It is crucial that in the stormy years ahead the Marxist ideas that they fought and died for are not forgotten but grasped and implemented.